Editor’s note: Muslims all over the world are celebrating Eid al-Fitr, one of the religion’s principal festivals. In August, Muslims will celebrate Eid al-Adha. Ken Chitwood, a scholar of global Islam, explains the two Islamic festivals.

Eid literally means a “festival” or “feast” in Arabic. There are two major eids in the Islamic calendar per year – Eid al-Fitr earlier in the year and Eid al-Adha later.

2. Why is Eid celebrated twice a year?

The two Eids recognize, celebrate and recall two distinct events that are significant to the story of Islam.

Eid al-Fitr means “the feast of breaking the fast.” The fast, in this instance, is Ramadan, which recalls the revealing of the Quran to Prophet Muhammad and requires Muslims to fast from sunrise to sundown for a month.

3. How do Muslims celebrate Eid al-Fitr?

Eid al-Fitr features two to three days of celebrations that include special morning prayers. People greet each other with “Eid Mubarak,” meaning “Blessed Eid” and with formal embraces. Sweet dishes are prepared at home and gifts are given to children and to those in need. In addition, Muslims are encouraged to forgive and seek forgiveness. Practices vary from country to country.

In many countries with large Muslim populations, Eid al-Fitr is a national holiday. Schools, offices and businesses are closed so family, friends and neighbors can enjoy the celebrations together. In the U.S. and the U.K., Muslims may request to have the day off from school or work to travel or celebrate with family and friends.

In countries like Egypt and Pakistan, Muslims decorate their homes with lanterns, twinkling lights or flowers. Special food is prepared and friends and family are invited over to celebrate. 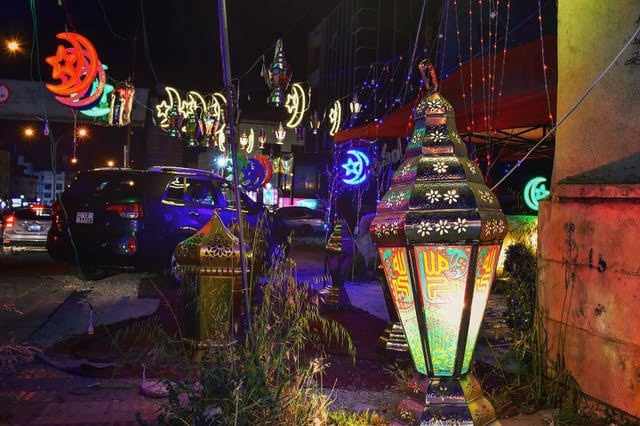 Fanous, the colorful lanterns of Ramadan, light up the streets of Amman, Jordan, throughout the holy month of fasting. Photo by Ken Chitwood/Creative Commons

In places like Jordan, with its Muslim majority population, the days before Eid al-Fitr can see a rush at local malls and special “Ramadan markets” as people prepare to exchange gifts on Eid al-Fitr.

In Turkey and in places that were once part of the Ottoman-Turkish empire such as Bosnia and Herzegovina, Albania, Azerbaijan and the Caucasus, it is also known as the, “Lesser Bayram” or “festival” in Turkish.

4. How do Muslims celebrate Eid al-Adha?

The other festival, Eid al-Adha, is the “feast of the sacrifice.” It comes at the end of the Hajj, an annual pilgrimage by millions of Muslims to the holy city of Mecca in Saudi Arabia that is obligatory once in a lifetime, but only for those with means.

Eid al-Adha recalls the story of how God commanded Ibrahim to sacrifice his son Ismail as a test of faith. The story, as narrated in the Quran, describes Satan’s attempt to tempt Ibrahim so he would disobey God’s command. Ibrahim, however, remains unmoved and informs Ismail, who is willing to be sacrificed.

But, just as Ibrahim attempts to kill his son, God intervenes and a ram is sacrificed in place of Ismail. During Eid al-Adha, Muslims slaughter an animal to remember Ibrahim’s sacrifice and remind themselves of the need to submit to the will of God.

5. When are they celebrated?

Eid al-Fitr is celebrated on the first day of the 10th month in the Islamic calendar.

Eid al-Adha is celebrated on the 10th day of the final month in the Islamic calendar. 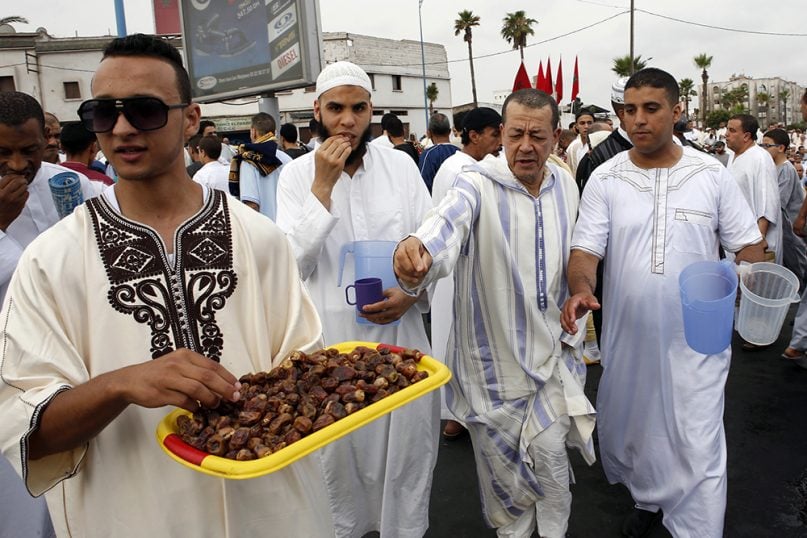 People distribute food and drink as believers break their fast near the Msala Mosque in Casablanca, during Eid celebrations in Casablanca, Morocco, on June 27, 2017. (AP Photo/Abdeljalil Bounhar)

6. What is the spiritual meaning of Eid al-Fitr?

Eid al-Fitr, as it follows the fasting of Ramadan, is also seen as a spiritual celebration of Allah’s provision of strength and endurance.

Amid the reflection and rejoicing, Eid al-Fitr is a time for charity, known as Zakat al-Fitr. Eid is meant to be a time of joy and blessing for the entire Muslim community and a time for distributing one’s wealth.

Charity to the poor is a highly emphasized value in Islam. The Quran says,

This piece incorporates materials from an article first published on Aug. 28, 2017.

(Ken Chitwood is a Ph.D. candidate in religion in the Americas and global Islam at the University of Florida. This article is republished from The Conversation under a Creative Commons license. The views expressed in this commentary do not necessarily represent those of Religion News Service.)