(RNS) — If you haven’t seen the video of Fort Worth, Texas, televangelist Kenneth Copeland attempting to answer questions about his private plane and the prosperity gospel in a rare and unexpected interview with Lisa Guerrero of “Inside Edition,” do so. It’s stunning, and important.

It’s difficult to get time with prosperity preachers. I would know, as I used to be one and work with one — my uncle, Benny Hinn.

But this persistent reporter managed to somehow get through his security and give people a glimpse of what prosperity preachers act and talk like when not prepared to answer tough questions.

After Guerrero confronted Copeland about his flying habits, she offered the 82-year-old a chance to catch his breath and collect his thoughts. Copeland brushed off the gracious offer. Leaning over the door of a Cadillac Escalade, he quickly jumped into character and explained why he needs multiple private jets to preach the gospel effectively and how a billionaire’s lifestyle is just part of God’s prosperous plan for those who believe in him.

Copeland’s outlandish statements and patronizing remarks did nothing more than misrepresent the true Christian gospel. Further, the interview served as a sobering reminder of how badly prosperity preachers represent Christian ministry and reliable ministers who serve faithfully. How do the preachers who perpetrate it make themselves believe they are doing the Lord’s work?

I grew up in the prosperity gospel. I lived it, believed it and bankrolled it. My family was at the center of it, with Uncle Benny leading the charge, until eventually my eyes opened to the exploitation and abuse of it. I can’t speak for everyone but I can offer some insight into why it might be so believable. 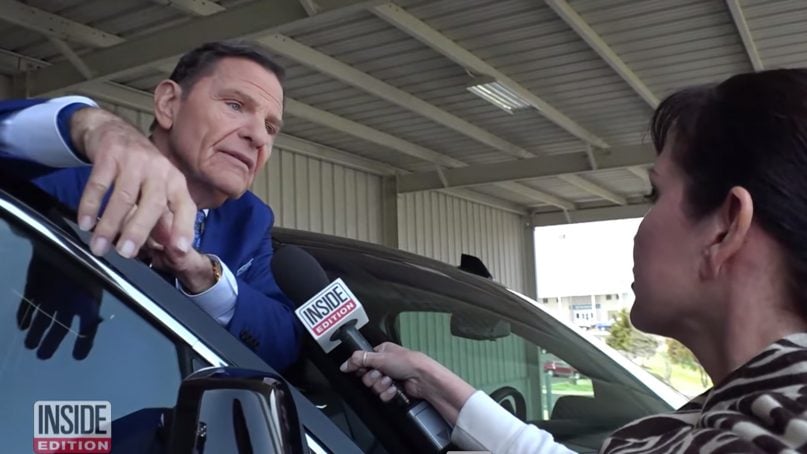 Life in the prosperity gospel is the good life. No, let me go further. It’s the great life. At least on the surface. Our houses were multimillion-dollar homes in the best ZIP codes in the country. Our annual salaries were more than some people make in a lifetime. I drove a BMW, Hummer (H2), Ferrari F430, Mercedes-Benz SL500. On a run-of-the-mill weekend, we could easily make upwards of $100,000 (take home) from offerings in our services for barely three days of work.

Once we returned home and put the video footage online or on TV, we could solicit donations from people to “support our gospel work” and make hundreds of thousands more in no time at all. It’s easy to believe something that puts money in the bank, even if you’re confirming your reservation in hell for deceiving the poor and the sick.

Our family had bodyguards, layers of security and the ability to tell anyone to do anything and it would be done. Picture a mob boss snapping his fingers and his hit man nodding without saying a word. That is life in the prosperity gospel power seat. The travel, the accommodations, the staff hierarchy, the attention, the notoriety, the bravado and the ability to control tens of thousands of people during a service are all reasons why the prosperity gospel lures preachers into selling their soul.

3. It made us prominent. For whatever money can’t give, and power can’t satisfy, there is the prominence and notoriety that come from being a global force. The prosperity gospel put us on the map and that felt really good. From poverty-stricken immigrants to having kings and presidents requesting the presence of the Hinn family at their home, the prosperity gospel does something to the ego that little else on the earth can do. It does an excellent job of selling the lie that you are “somebody” when in reality you are nothing more than another con artist who’s found a way to sell your scheme to desperate bidders.

There is another puzzle to the prosperity gospel, however. You might assume that any individual can spot the theatrical ruse and greedy schemes of a prosperity preacher like Copeland from a mile away. Yet hundreds of millions of people loyally commit their account savings (and possibly their souls) to prosperity preachers every single year around the world hoping that by doing so God will give them health and wealth. All of this exploitation leads us to one very troubling question:

Why would someone believe the prosperity gospel?

For starters, it’s pretty attractive to outside eyes — once you get past the whole issue of it being damnable “heresy.” Quite honestly, at the core of who we are as people there is something that wants to believe the prosperity gospel is real — or at least the benefits of it.

Wealthy preachers like Copeland, Creflo Dollar, Joel Osteen, Paula White and my uncle live like rock stars in multimillion-dollar mansions, drive luxury cars, fly in private jets and do it all using donations from their faithful followers. Let’s face it, the prosperity does look pretty good!

This twisted version of Christianity promises that Jesus will make you healthy, wealthy and happy.

The heartbreaking reality of the prosperity gospel is that by the time you reach the top of the pyramid, you’re still empty. Many preachers spend the better part of their ministry exploiting people to have it all, only to weep with regret decades later when they realize they’ve got a date with destiny coming for them.

No matter what you believe, you have to believe that prosperity preachers who exploit the poor and target sick people in Third World countries have a scary reality awaiting them in the next life if they don’t make things right in this one.

(Costi W. Hinn is the pastor of Redeemer Bible Church in Gilbert, Ariz., and is a former prosperity gospel propagator. He is the nephew of world-famous prosperity preacher Benny Hinn and is the author of “God, Greed, and the (Prosperity) Gospel.” The views expressed in this commentary do not necessarily represent those of Religion News Service.)