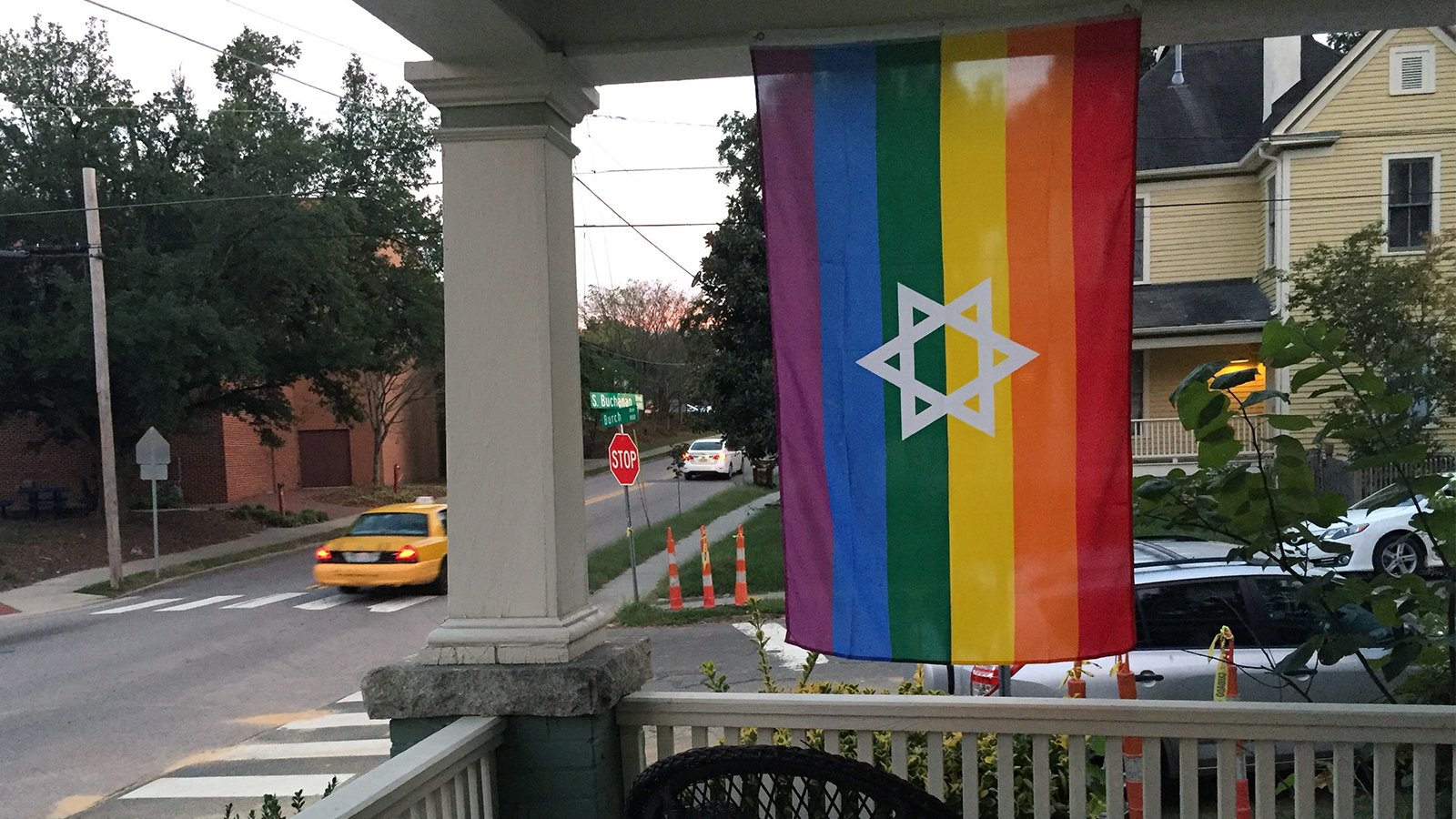 (RNS) — Friday’s DC Dyke March in the nation’s capital was supposed to be a celebratory return of a group of lesbians and their allies who had been absent from D.C. Pride parades for a dozen years.

Instead, its planning devolved into accusations of bigotry and anti-Semitism after organizers banned “nationalist symbols,” especially the rainbow pride flag with the Star of David. Their reasoning was that it too closely resembled the flag of the State of Israel, which features a Star of David at the center, sandwiched between two light blue stripes.

But for queer Jews, the rainbow flag with the Star of David has nothing to do with Israel. They say it’s a Jewish symbol and an ancient one at that, predating the modern State of Israel by more than 1,500 years.

“When I look at the Star of David, I see ancient history,” said Rabbi Danya Ruttenberg, a Chicago-based author and activist. “I see community. I see diaspora. I see celebration. I see connection to God. I see pain. It’s an identification of a Jew, religious or not.”

What is the Star of David and why the recent controversy?

The star, known in Hebrew as “Magen David,” meaning the “Shield of David,” does not date back to biblical days. It began appearing in synagogue mosaics in the second century in Jerusalem and in areas near the Sea of Galilee. In the third century, it appeared on a tombstone in southern Italy.

In medieval times, the star was sewn onto flags denoting Jewish communities in Hungary and present-day Czech Republic.

Kabbalah, the ancient Jewish mystical tradition that took off in the 13th century, viewed the star with its two interlocking triangles has having protective, magical powers. It began to be viewed as a charm and a way of connecting with God.

The star grew so distinctive as a mark of Jewish identity that the Nazis adopted it in the 1930s when they forced Jews to wear the yellow badges with the star.

In 1948, when the State of Israel was created, the Shield of David was adopted as part of the flag. But it is widely used on Torah covers, Hebrew Bibles and all manner of Jewish ceremonial objects.

In the 1990s, the star began appearing on pride flags as a symbol of LGBTQ Jews.

Why did the D.C. Dyke March ban it?

Organizers said they wanted to exclude “nationalist symbols” including flags and banners that represent “nations that have specific oppressive tendencies.” Many see Israel as contributing to the oppression of the Palestinian people by occupying the West Bank.

As Rabbi Rachel Timoner, senior rabbi at Congregation Beth Elohim in Brooklyn, N.Y., wrote recently in The Forward, both Jews and Palestinians have a history of displacement and trauma.

And of course, no matter their nationality, lesbians are a minority everywhere.

“One would think that since we come from marginalized communities that they would be natural allies,” said Ronit Bezalel, communications director for A Wider Bridge, an LGBTQ organization that advocates for equality in Israel. “It’s heartbreaking to see it isn’t.”

Is this the first example of the star being received as a symbol of nationalism or Zionism?

No. Two years ago, three women were asked to leave the Chicago Dyke March after being told their pride flags with a Star of David might be offensive to some marchers.

The exclusion of the pride flag with the Star of David at the DC Dyke March is just one in a series of recent incidents in which the left has been called anti-Semitic.

Earlier this year, two organizers of the Women’s March, Tamika Mallory and Carmen Perez, were accused of making anti-Jewish comments at planning meetings. Mallory, in particular, refused to denounce Nation of Islam leader Louis Farrakhan, a known anti-Semite with whom she has had a long acquaintance. As a result, many Jewish women pulled out of the march.

Jewish leaders say that a lot more education is needed — both about the Star of David as well as Jewish history and the distinctions between Judaism, the State of Israel and minorities in the U.S.

“Intersectional solidarity work is hard,” said Ruttenberg. “There’s no question about it. We should dedicate the next two years to hard, deep listening and understanding around this.”