It has been quite a year for Jane Manning James—finally. First there was the feature film Jane and Emma, released last autumn, which focused on the friendship between Emma Smith, first wife of the Mormon prophet Joseph Smith, and Jane Manning James, an African American convert living with their family in Nauvoo, IL.

(The movie is now available for rental on Amazon and YouTube, and was the focus of a terrific panel at the Mormon History Association’s annual meeting last week.)

And now — at last! — there is also a full-fledged biography of Jane, which just released from Oxford University Press: Your Sister in the Gospel, by historian Quincy Newell. Newell is associate professor of religious studies at Hamilton College in central New York, and the author of Negotiating Lives at Mission San Francisco and the co-editor of the Mormon Studies Review. I say down with Quincy last week at the MHA to discuss the new book. 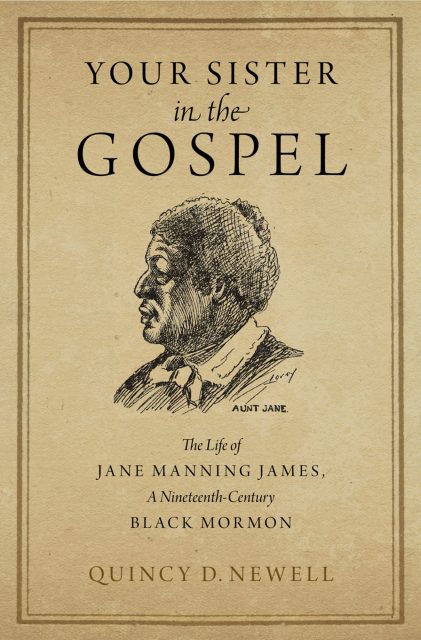 RNS: What drew you to this project?

Newell: I was working on a project about 19th-century African American and Native American Mormons, and stuff about Jane just kept popping up in my research and threatening to take over the whole project. I like to joke that I made a deal with Jane: That I would write her biography if she would leave me alone. So I’ve written the biography; we’ll see if she leaves me alone.

It was surprising to me how ubiquitous references to her turned out to be in unexpected places. She was showing up in people’s diaries, in meeting minutes, in the Woman’s Exponent.

RNS: Can you tell us why her story is so vital?

Newell: I was interested in what it was like to be a black person in a church that was trying so hard to be white. Her religious experience is so different from what we would expect—she’s speaking in tongues, she’s doing faith healings, she’s having all these charismatic experiences. Those have been pushed out of Mormonism but were actually very common in the 19th century. So her story provides a nice corrective to the standard narrative of Mormon history, which focuses on white men and, to a lesser extent, on white women. That history largely focuses on priesthood and missions and temple building.

Because she’s black and a woman, she doesn’t have access to priesthood. So anytime she needs a blessing for herself or her family, someone has to be brought in from outside the family circle. She doesn’t have access to endowments or sealings, so her connection to the divine is not temple-centric so much as centered in those charismatic experiences. She gives us a different sense of what Mormonism is.

RNS: Throughout her life Jane petitioned church leaders for access to the temple. Can you explain the significance of the temple for Jane?

Newell: For Latter-day Saints, the temple in the 19th century becomes the site where rituals are performed that they believe are crucial to their full salvation. So they do baptisms for the dead, rituals called endowments (initiation rituals), and sealings that follow the scriptural injunction that whatever you bind on earth will be bound in heaven. Mormons take that quite literally and believe that people who are bound together in sealing rituals on earth will be bound in heaven—husbands and wives, parents and children.

Jane was allowed to do baptisms for her dead relatives in the temple, but because she was black she was not allowed to participate in endowment and sealing rituals. And she and her co-religionists all believed that when she died, she and her family would be separated, and she would not be allowed to achieve the highest degree of exaltation in the afterlife.

She was barred because she was black. Many white Americans and Europeans believed that blackness indicated descent from Cain. That gets expanded a bit in other LDS scriptures. So it was a common belief in Mormonism, but it gets institutionalized in Mormonism in a way we don’t see in other religions.

The corollary to the priesthood ban was the temple restriction, which kept people of African descent out of endowment and sealing rituals. From the 1880s until her death in 1908, Jane keeps pestering church leaders for permission to be sealed to Joseph Smith as a child, which she said he had offered to her. During that time a lot of other white Saints were asking to be sealed to Joseph Smith as a child, and it was granted to them. So she’s asking for this thing that other Mormons around her are getting, but she keeps hearing no, and I think that’s because the leaders just can’t imagine Joseph Smith having a black daughter for eternity.

Finally the leaders get fed up and compromise by creating a ceremony that seals her to Joseph Smith, but not as a daughter. Instead they seal her as a servant. They do that sealing in the Salt Lake temple in 1894. Jane is alive and well at the time, but she is not allowed to be present. Zina Young stands as a proxy for Jane, and Joseph F. Smith stands as a proxy for [his uncle] Joseph Smith.

She’s sealed to Joseph Smith as a servant, which is a role she had played in her mortal life, since she had been a servant in his household in Nauvoo. So church leaders set her up to play that role for all of eternity.

RNS: In Mormon history are there other examples of sealings of servants in the temple?

Newell: No. This is the only time it was done. What I find so interesting about that ceremony is that it’s this moment of great creativity in some ways, of ritual innovation. And yet it’s in service of a racist system. So it’s horrifying and amazing all at once.

I think the fact that it was never repeated shows that it was not a satisfactory compromise. Jane comes back again around 1902 asking to be sealed to Joseph Smith as a child.

Newell: She was certainly tenacious. I think it was really important to her that those who knew her understand that she was never enslaved. She makes that point over and over again and works hard to distance herself from any association with slavery. On the trip to Nauvoo she loses her trunk on the journey. There’s an advertisement in the Nauvoo Neighbor, the local paper, in which she describes the trunk as containing beautiful clothes, mostly new. She uses the description to mark herself as a consumer, not a producer or laborer, so she’s working hard to solidify that status as someone who is born free. 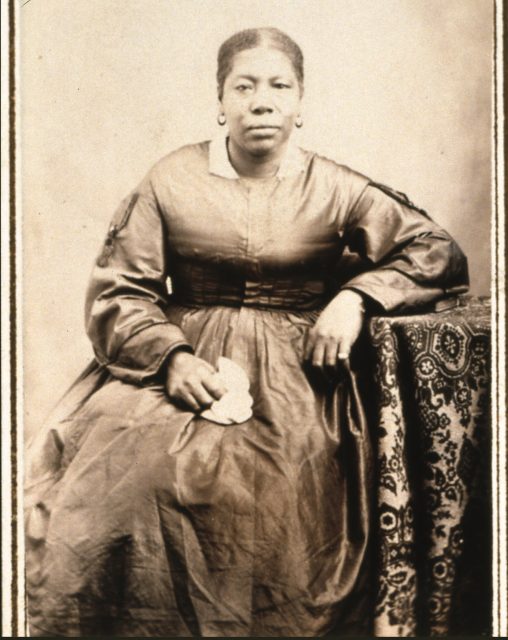 A carte de visite that is believed to depict Jane Manning James.

We have a carte de visite image of a black woman we believe is Jane. We’re not positive. She’s well dressed. She has a book on the table that she’s resting her arm on. I think it is either the Book of Mormon or meant to be seen as the Book of Mormon, so she is signaling her piety. She is plainly and modestly dressed. She’s looking straight at the camera, which is partly due to the photographic requirements of the time, with a serious expression on her face. She’s not frivolous. She’s a respectable woman.

In 1855 both Jane and Isaac are listed as being part of the “help” in Brigham Young’s household, along with several family members. Even their two-year-old daughter is listed there as “help,” which is interesting. All of the other people are divided up by household, but Jane and Isaac aren’t included in that section. They’re not wives or children, and they’re also not listed among “hired help men” and “hired help women.” Those people are listed as individuals, whereas Jane and Isaac and their entire family are listed. So it’s clear that their children are also seen as being in domestic service.

We don’t have a good sense of how they were compensated for that. It’s clear that Brigham Young extends a fair bit of credit to Isaac James, so they are being compensated somehow, and they do eventually purchase their own land and set up a farming operation. They do pretty well for themselves economically in the 1850s and 1860s. They’re not the wealthiest family in their ward, but also not the poorest. They’re solidly in the middle. And it looks like eventually they stop working for Brigham Young and his family.

But there’s a really interesting moment with Augusta Adams Cobb, one of Brigham Young’s wives, who seems to want to be connected to some of the most powerful men in Mormonism. There’s a quest for status and power in her trajectory. In writing to Brigham Young she’s angry with him that he hasn’t given her the resources that she wants, including Isaac’s help. She writes, “May God grant me a Negro someday.” She has this sense of being entitled to black labor. We don’t have enough information to know why Isaac didn’t do what she asked him to do, but he might have said no to discourage that sense of entitlement. That letter is a really interesting window into the realities of labor and independence for black people in early Utah.