NEW YORK (AP) — Charitable giving by individual Americans in 2018 suffered its biggest drop since the Great Recession of 2008-09, in part because of Republican-backed changes in tax policy, according to the latest comprehensive report on Americans’ giving patterns.

Experts involved with the report said 2018 was a complex year for charitable giving, with a relatively strong economy overall and a volatile stock market. Giving by corporations and foundations increased, so that total giving — including donations from individuals — edged up by 0.7% to $427.7 billion.

Among various factors affecting charitable giving was a federal tax policy change that doubled the standard deduction. More than 45 million households itemized deductions in 2016, according to Giving USA, and that number likely dropped sharply in 2018, reducing an incentive for charitable giving.

“Whenever there’s a major tax policy change like that, it has an effect,” said Rick Dunham, chair of Giving USA Foundation, which publishes the annual report. It is researched and written by the Indiana University Lilly Family School of Philanthropy.

Dunham and other experts said it will likely take another year of analysis, with the help of additional data, to reach a more precise estimate of the tax change’s impact.

Stacy Palmer, editor of The Chronicle of Philanthropy, a magazine that covers the nonprofit world, suggested that the changes would have relatively less impact on charities that rely on wealthy donors, and greater impact on social-service providers and other charities that get broad support from middle-class Americans.

“Charities who depend on them are really worried,” said Palmer.

United Way, the largest traditional charity in the U.S., is among the nonprofits relying on middle-class donors. About 90% of its donations come through workplace-based campaigns, according to its chief marketing officer, Lisa Bowman.

Bowman said United Way won’t know until later this year how it fared for its 2018-19 fiscal year, but she noted that traditional nonprofits face many new challenges, including competition from online crowdfunding operations such as GoFundMe.

Among the nine charitable sectors identified by Giving USA, there were mixed results. Donations were up for nonprofits involved in international affairs and environmental or animal-welfare issues. Giving to foundations was down, as was giving to education, to religion and to public-society benefit organizations — groups that work on such issues as voter education, civil rights, civil liberties and consumer rights.

Giving to religion — perennially the biggest sector — is estimated to have declined by 1.5% in 2018 (a decrease of 3.9% adjusted for inflation), with a total of $124.52 billion in contributions.

Una Osili, an associate dean at the Lilly philanthropy school, said giving to religious institutions has been lagging behind other sectors for several years. Reasons include declining attendance at church services and a rising number of Americans not affiliated with any particular religion.

For the largest U.S. denomination — the Roman Catholic Church — a long-running clergy sex-abuse crisis also has taken a financial toll. According to a recent Pew Research Center survey, about one-fourth of U.S. Catholics have decreased donations to the church because of the scandals.

Empty Tomb, a Christian organization based in Champaign, Ill., that researches religious giving, says the decline is long-standing. According to its research, Americans gave about 3% of their disposable income to churches in 1968, and less than 2.2% in 2016.

Empty Tomb’s leaders, Sylvia and John Ronsvalle, have attributed the decline at least in part to a failure by church leaders to inspire more than a perfunctory level of generosity. Their latest report refers to a perception in some quarters that church is “boring.”

Overall, Americans’ level of generosity is similar to what it was decades ago. For 2018, giving by individuals represented 1.9% of total disposable income, down from 2.4% in 2005 and the same as the rate in 1984.

Similarly, total charitable donations have hovered around 2% of the gross domestic product for many years; for 2018, that figure was 2.1%. 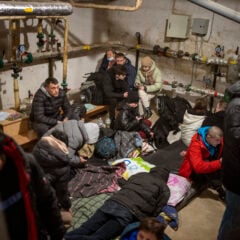