(RNS) — If President Trump gets his way, reading the Bible could get more expensive.

The parent company of the two largest Bible publishers in the United States has warned the Trump administration that proposed tariffs on China would amount to a “Bible tax.”

Trump’s proposed tariffs on $300 billion in Chinese-made products would affect books and other printed materials, according to Bloomberg. That includes Bibles, which are overwhelmingly printed in China because of the specialized technology and skills they require to produce.

“We believe the Administration was unaware of the potential negative impact these proposed tariffs would have on the publishing industry generally, and that it never intended to impose a ‘Bible Tax’ on consumers and religious organizations,” said Mark Schoenwald, president of HarperCollins Christian Publishing, in a written statement.

“However, if printed books, including Bibles are not removed from the fourth list of products from China to be subject to tariffs and the tariffs go into effect, publishers will reduce investment in their businesses, consumers and religious organizations will face higher prices, and churches, schools, ministries, and non-profit organizations will have fewer resources to educate others and connect them with the Holy Bible.”

HarperCollins owns both Thomas Nelson and Zondervan, two of the largest Bible producers in the U.S.

Schoenwald testified to a panel of officials at the U.S. International Trade Commission earlier this week during a hearing on the proposed tariffs.

He was joined by Stan Jantz, president and CEO of the Evangelical Christian Publishers Association. 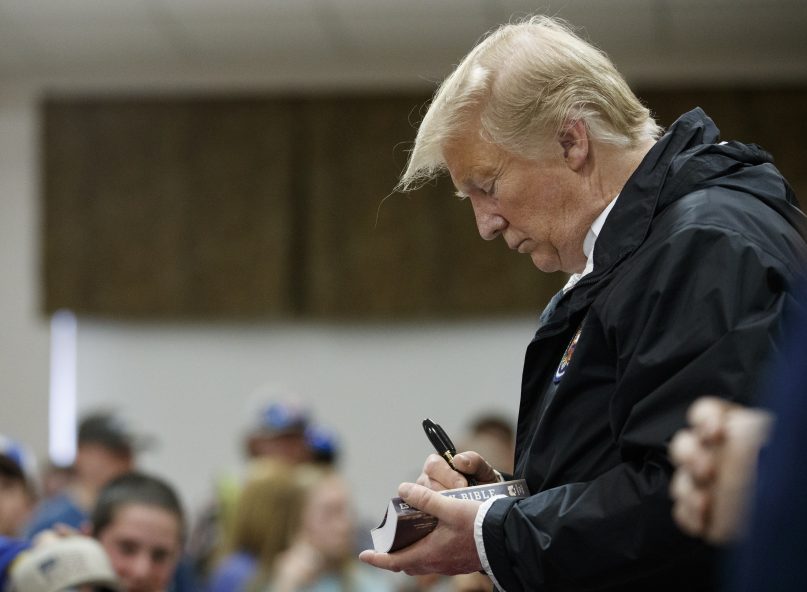 President Trump signs a Bible as he greets people at Providence Baptist Church in Smiths Station, Ala., on March 8, 2019. (AP Photo/Carolyn Kaster)

President Trump has proposed a tariff of up to 25% on all goods imported from China, Jantz told Religion News Service.

Books and Bibles generally have been exempted from trade restrictions in the past, he said.

And more than half of the 100 million Bibles printed every year have been printed in China since the 1980s, he said. Of those, 20 million are sold or given away in the U.S.

That’s because of the specialized printing requirements for a complex book like the Bible, such as thin paper that can’t be fed into standard printing equipment, leather covers, stitched binding, color pages and special inserts like maps.

Most printers outside of China don’t have the range of facilities to manufacture the same Bibles, according to Schoenwald. And those that do won’t be able to keep up with China’s pricing or the increased demand for their services.

The HarperCollins president doesn’t see any U.S. printers rushing to reinvest in those facilities, he said, because Trump’s proposed tariffs are related to a trade dispute with China and could be lifted later.

Jantz said the hearing was “fact-finding” and not “combative,” and he felt officials were receptive to making an exemption for books and Bibles.

But, if not, it could mean fewer Bibles or more expensive Bibles or Bibles in a different format than Americans have grown used to. It also could have wider impacts on Christian publishing and on ministries’ ability to distribute Bibles.

And Jantz said that he has heard the same concern from many ECPA members:

“There will be significant damage to Bible accessibility if Bibles and books are not excluded from the tariffs,” he said in a statement. “Some believe such a tariff would place a practical limitation on religious freedom.”