MOSCOW (RNS) — Early one evening in May 2018, days before the annual parade celebrating the Soviet victory in World War II, a convoy of military trucks carrying long-range nuclear weapons trundled to a halt on the Russian capital’s ring road.

Since relations between Russia and the West plummeted after the Kremlin’s seizure of Crimea in 2014, such scenes have become common here. Priests have sanctified S-400 surface-to-air missiles, nuclear submarines, tanks and fighter jets. Several years ago, a priest in Russia’s far east explained that weapons, including nuclear missiles, were “perceived as a means of protection and salvation.”

But the practice could soon be a thing of the past. Last month, a Russian Orthodox Church committee on ecclesiastical law recommended that clergy concentrate on blessing soldiers, rather than weapons.

“One can talk about the blessing of a warrior on military duty in defense of the fatherland,” said Savva Tutunov, a bishop of the Moscow Patriarchate. “At the end of the corresponding ritual, the personal weapon is also blessed — precisely because it is connected to the individual person who is receiving the blessing. By the same reasoning, weapons of mass destruction should not be sanctified.”

Not everyone agrees with the committee’s proposal, which still has to be approved by Patriarch Kirill, the head of the Russian Orthodox Church. 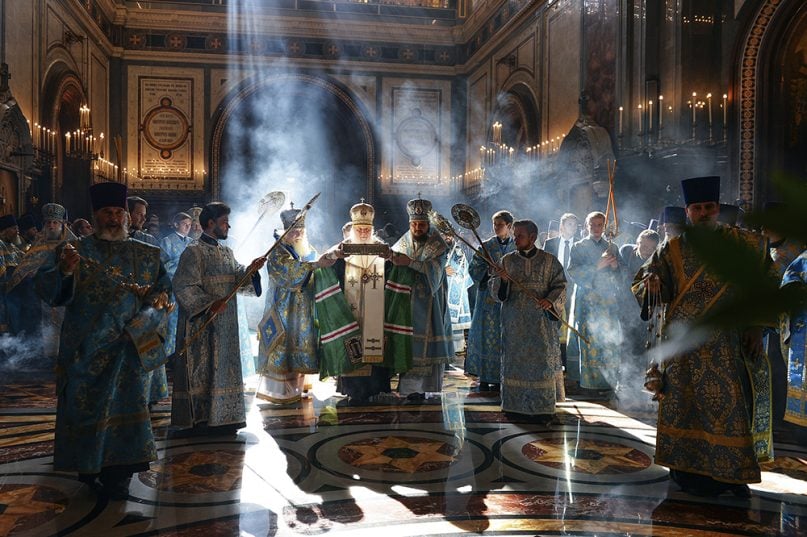 Vsevolod Chaplin, an influential priest and former spokesman for the patriarch, told the Vzglyad newspaper that nuclear weapons were the country’s “guardian angels” and necessary to preserve “Orthodox civilization.”

“Only nuclear weapons protect Russia from enslavement by the West,” Chaplin said.

In any event, a ban on sanctifying weapons of mass destruction is unlikely to affect the intertwining of Russia’s armed forces — including its nuclear forces — with the Russian Orthodox Church under President Vladimir Putin.

Patriarch Kirill has described the Kremlin’s military campaign in Syria as a “holy war,” while uniformed clerics embedded with the armed forces are being trained to drive combat vehicles and operate communication equipment.

Some critics have likened the role of priests in the modern Russian military to that played by Soviet-era political officers, whose task was to root out dissenting views. Russia is also constructing a vast Main Cathedral of the Armed Forces near Moscow, whose steps will be made from melted-down tanks seized from the Nazis.

The ban would constitute a signal change in the church’s official policy regarding Russia’s nuclear arsenal. Although the global Orthodox Church has condemned weapons of mass destruction, Patriarch Kirill has credited Russia’s nuclear capability with “preventing World War III” and ensuring Russia’s state sovereignty. The Russian Orthodox Church also consecrated the country’s nuclear arsenal during a service in Moscow’s Christ the Savior Cathedral in 2007.

Russia’s nuclear arsenal also has its own patron saint — St. Seraphim, whose remains were discovered in 1991 in a disused monastery in Sarov, a small town in central Russia that was home to several key nuclear facilities in the Soviet era. 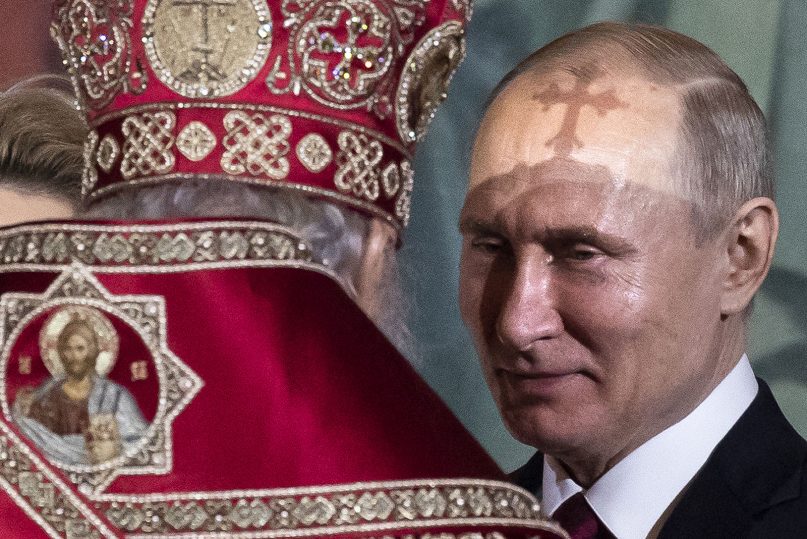 In exchange for its support, Adamsky wrote, the church had received a boost to its “social and political influence.”

Putin has memorably described Orthodox Christianity and nuclear weapons as “twin elements of Russia’s domestic and foreign security.” He has also used religious terms to discuss the nightmare scenario of nuclear war.

“An aggressor should know that vengeance is inevitable, that he will be annihilated. Whereas we would become the victims of their aggression, and as martyrs, will go to heaven — they will just end up dead, because they won’t even have time to repent,” he said last year.

Ideas such as these have been melded into a radical ideology described as “Atomic Orthodoxy” by Yegor Kholmogorov, a nationalist writer.

Kholmogorov’s ideology was never officially approved by Patriarch Kirill, but it has gained a degree of popularity in recent years among radical Orthodox groups.

“I was myself, to some extent, a medium for such ideas,” Dmitry Tsorionov, the former head of a radical Orthodox Christian movement called God’s Will that sometimes clashed with anti-Kremlin activists. “It was not uncommon to see how church functionaries openly flirted with these toxic ideas.”

Tsorionov, who is better known by his pseudonym, Enteo, said he broke with militant Orthodox ideology when he witnessed how young Russian men took up arms and voluntarily headed to eastern Ukraine to fight “under the banner of Christ” after the Kremlin’s support for separatist forces there.

“It was only then that I finally realized what the blessing of military hardware leads to,” Tsorionov said. 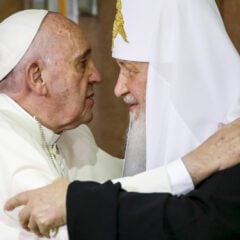 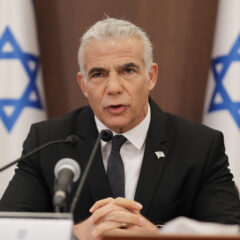