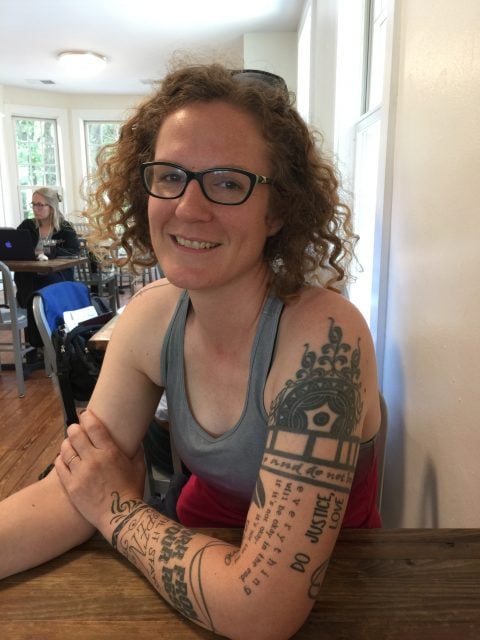 If you like your spirituality books laced equally with wisdom, memoir, and snarky humor . . .

If you have enjoyed authors like Nadia Bolz-Weber, Rachel Held Evans, and Peter Enns . . .

Then let me commend to you Alice Connor’s How to Human: An Incomplete Manual for Living in a Messed-up World, which was just released from Fortress Press. It’s a smart and playful take on theological adulting, basically.

Chapters include “Say the Thing,” “Do S**t on Purpose,” “Consider the Lilies, Dammit,” and—my personal favorite as a recovering perfectionist—“Sucking at Something Is the First Step to Being Sorta Good at Something.”

As a campus minister at the University of Cincinnati, Alice has taken an all-but-dead program for Christian students and turned it around so that now hundreds of folks are involved. Because she lives here in town, I was able to do this interview in person, and it’s always a treat to spend time with her. (See here for an interview about her first book, Fierce, about kickass women of the Bible.) — JKR 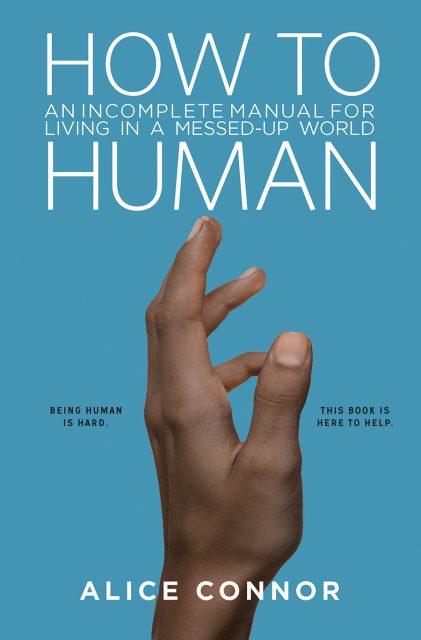 RNS: This is a helpful book for the self that isn’t a self-help book, if that makes sense. It’s not “here are the ten things to do to grow your ministry or be a better person.” Would you say it’s more about experimenting, about being curious about what a life with God could look like?

Alice Connor: I’m not a scientist, but I feel strongly about the idea of asking a difficult question about the way something is, with true curiosity about what the answer could be. The language of experimentation is about a willingness to see lots of possibilities. If I try something, and it doesn’t “work,” or I don’t get the answer I’m expecting, that is still information I can do something with.

RNS: Give us an example of an experiment you’ve tried.

Connor: Years and years ago, one of my students would constantly ask me, “Do you need help?” I tend to carry a lot of heavy stuff around with me on campus. He noticed that I always said no when he asked if I needed help. I realized that I did that because I needed to be in control; I don’t want to lean on other people.

So I did this experiment for a week of always saying yes if anyone asked me if I needed help. People helped me, but no one looked down on me or thought I was weak. I’m aware that this is a small example, but how many small things in our lives do we struggle with? Or somebody pushes back and says “Why are you so angry? What if you take a step back?” If we do something different, what will happen? Most of the time, it’s good things.

RNS: Each chapter is one of 13 things you encourage the reader to experiment with. What’s an example?

Connor: Do s**t on purpose. It arose from a number of things. My Enneagram teacher told me years ago “don’t let your personality drive you. You’re in the driver’s seat.” But we are asleep a lot of the time. There’s a reason why people of color use the word “woke” to describe coming into an awareness, like an awareness of racism. We are spiritually asleep, and we don’t notice a lot of the things that we do or say, or the impact that they have. We’re dreaming.

In a dream, things just happen to you, and you don’t have any control over it. As we wake up—which is a process, not just a moment, and which takes work—we start to have more intention about what we’re doing. Part of the task of waking up is asking what you have been paying attention to. RNS: What has happened since Fierce was first published? How have things changed for you?

Connor: Fierce seems to be still doing fairly well, as these things go. Well enough that Fortress has asked if I’m willing to do a sequel.

The voice of shame in my heart is, “Who do you think you are?” When you read Brené Brown it’s about this voice, and the particular way that shame speaks to us. For me it’s not, “You can’t do this thing; you’re not good enough.” For me it’s, “Now you’ve done this thing, but you still can’t consider yourself a writer.” I struggle with calling myself a writer. And also I struggle with offering the wisdom that I’ve learned as a campus minister to other campus ministries, because I don’t want it to look like I’m boasting. One thing that has changed since the last book is that now I’m able to name that!

RNS: Tell me about your students. Why do they show up?

Connor: I think there’s two answers to that. For the people who come to the Edge House itself, one student said, “Because when I walk in the door, people know my name, and they say it with joy.” It’s that sense of knowing and being known. The fact that people said his name with joy is a signifier of that deeper relationship.

The second part is when I’m on campus, they don’t come to me because I’m cool; I’m cool because I go to them, and take them seriously in the physical and emotional space they’re in. I am not trying to make them into someone else. I am listening to them with curiosity. Similarly, I think that they feel seen. On a campus that big—46,000 students—it’s easy to not be seen. That group in particular connect because they feel seen. I really try to look at them as they are, not as I think they should be.

RNS: What is your favorite chapter of the book?

Connor: It might be the conclusion, which is a strange thing to say. I often ask my students whether in a group or individually, “So what?” And I don’t mean that in a cruel or sarcastic way; I mean, “What difference does this make?” So with the book, after you’ve read this thing, what are you going to chew on next? How you are is not inevitable. You may have acted or felt or thought in particular ways your whole life, but you don’t have to. You can do something different. So what do you want that to be?

The chapter topics tend to overlap, kind of like a Venn diagram with 13 parts. Even that structure is part of non-dual thinking. I didn’t realize how important that was to me until I was in the middle of writing the book. Almost every chapter talks about possibilities and options. At any given moment as a human being you have perfect freedom to respond in multiple ways. Yet at the same time we’re aware that not all of those possibilities are pleasant or constructive. But we often find ourselves thinking there are only binary options, which is a very human experience, or freaking out when things don’t go well. Hold all these things gently. Gentleness is just seeing things for what they are, instead of having our usual fight/flight/freeze reaction.

RNS: Your writing can be very funny. What are you trying to communicate with that?

Connor: While all of this stuff can be difficult and painful, it can also be done with a sense of humor. In our house we often try to shift our language from “I have to” to “I get to.” We get to work on ourselves. We get to live into this idea of being made in the image of God. There’s a bit in the Al-Anon book about recovery where it talks about looking at the “defects of character” that we have with humor and amusement. Holding it loosely. Ideally you get to a place where you see yourself saying those things and redoing those patterns and can say, “Hey! Look at that. Isn’t that interesting.” That doesn’t mean you’re thrilled that you do it, or that you have that pattern, but that there’s a delight in noticing.

Having a sense of humor in the whole thing is pivotal. I just came back from a pilgrimage to Spain, and we went to the Sagrada Familia, which is ridiculously beautiful. I’ve been in a lot of cathedrals, and there’s the awe of the weight of the space, which is glorious and serious. But the Sagrada Familia, more than any other cathedral I’ve been in, has a sense of humor about itself. I particularly noticed this when we were outside, looking at the top of the spires, with these white cloud mosaic things. I couldn’t help but laugh. Those spaces are perfect because they have the beauty and the gravitas, but they also make us giggle. And that’s a perfect representation for working on the soul.

Fierce-ass women of the Bible

You may be reading the Bible wrong. Peter Enns says the Bible itself teaches a better way.