Which one, you’re asking?

It was: “Which of the following is one of Buddhism’s Four Noble Truths?” I chose “the truth that every living being has an immortal soul” instead of “the truth of suffering.”

OK, so I got 14 of them right, and when I look at the full 32-question survey, I figure I’d score a 31. But I teach religion, for crying out loud, and I fit into all the right categories besides.

I also attend religious services fairly regularly, which is a religious knowledge-enhancing factor, too. But I never took a world religion class (another factor), and while I’ve heard tell of Buddhism’s Four Noble Truths, I never bothered to find out what they are.

The shame of it.

But that’s me. If you, lay reader of this column, only get half the questions right, which is the average score, should you feel bad?

Pew, which prides itself on facts not thoughts, would never say so. The survey was merely “designed to measure the public’s knowledge about a wide range of religious subjects.” But my old friend Steve Prothero, who helped design the survey, thinks otherwise.

A decade ago, the Boston University religion prof wrote “Religious Literacy: What Every American Needs to Know — and Doesn’t” to highlight the dangers of not knowing enough about the field and to urge that it be taught in public schools.

Maybe so, but religious illiteracy has been around for a long time. Early in the Reformation, Protestant leaders began making visitations to local parishes to take stock of people’s religious knowledge and practices. After participating in the first of these, in Saxony, Luther himself wrote:

Dear God help us, what misery have I seen! The common man, especially in the villages, knows absolutely nothing about Christian doctrine; and indeed many pastors are in effect unfit and incompetent to teach. Yet they are all called Christians, are baptized, and enjoy the holy sacraments — even though they cannot recite either the Lord’s Prayer, the Creed or the Commandments.

The good news from Pew this week is that respondents did reasonably well when it came to their own religious traditions. Most Christians know that Easter has to do with the Resurrection. They have a reasonable grasp of famous stories from the Old and New Testaments. Most Jews are clear about what Moses and Esther did and virtually all Mormons know that Joseph Smith was a Mormon (though they’re not supposed to call him, or themselves, that anymore).

Also on the good news front: 62% of respondents know that Mecca is Islam’s holiest city; 60%, that Ramadan is an Islamic holy month; 50%, that yoga is associated with Hinduism; and 42%, that Sikhism requires men to wear a turban and carry a small dagger.

Whether such knowledge indicates a capacity to reckon with the volatility of religion in today’s world is another question, but I suppose it can’t hurt.

As a practical matter, the worst piece of news is that only 27% of respondents are aware that the Constitution says you can’t be required to take a religious test in order to hold public office. Fifteen percent said the Constitution requires federal officeholders to affirm that all men are endowed by their Creator with certain inalienable rights; 12%, that it requires them to be sworn in on the Holy Bible; 13%, that it  says nothing about religion as it relates to federal officeholders; and the remainder (33%), that they just don’t know.

For the record, here’s the relevant paragraph from Article Six: “The Senators and Representatives before mentioned, and the members of the several state legislatures, and all executive and judicial officers, both of the United States and of the several states, shall be bound by oath or affirmation, to support this Constitution; but no religious test shall ever be required as a qualification to any office or public trust under the United States.” 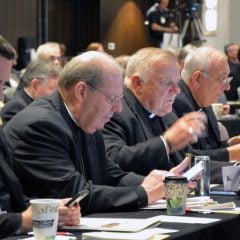 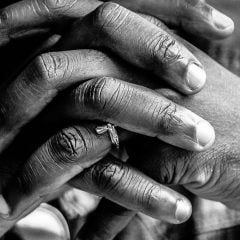 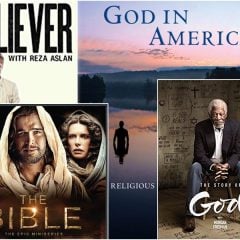 News
Cue the religion scholar! Representing faith on the big and small screen

News
Christians outnumber Muslim refugees to US in last 15 years

Martini Judaism
Are smart Jews too cool for shul?