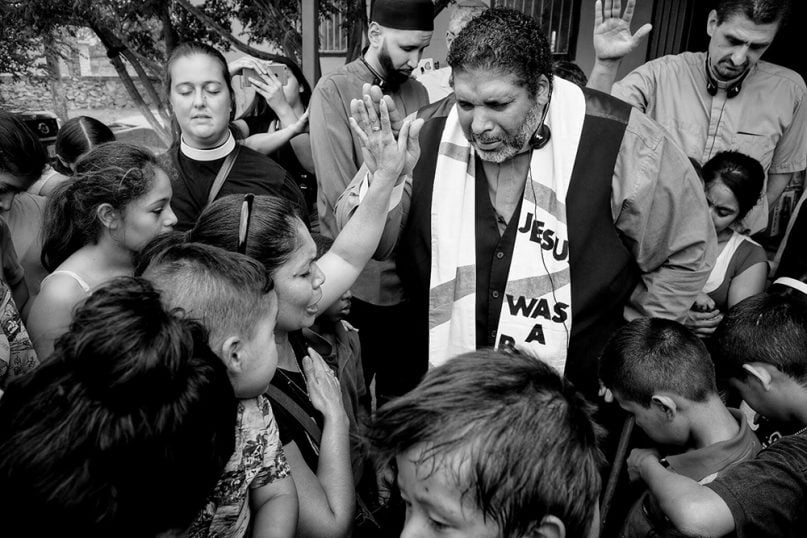 The Rev. William Barber II, center, and other leaders of the Poor People’s Campaign pray with migrants in Juarez, Mexico. Photo by Steve Pavey

(RNS) — Sixteen years ago, when I and other human rights advocates were deported from Iraq by Saddam Hussein’s regime just days before its collapse, we were welcomed into a United Nations refugee camp on the Jordanian border, where we received medical attention, food and accommodations in spacious air-conditioned tents.

The same can’t be said for those staying at the makeshift camp at the U.S. border in Juarez, Mexico, where 200 migrants from Central America and Africa have found temporary shelter.

When we arrived there on Sunday (July 28), we met migrants in the dirt courtyard outside a block building without air conditioning and heard their stories under the desert sun.

I had traveled to Juarez with fellow leaders of the Poor People’s Campaign, the Revs. William Barber II, Liz Theoharis and Robin Tanner, as well as Imam Omar Suleiman of the Yaqeen Institute, Rabbi Rick Jacobs of the Union for Reform Judaism and Shane Claiborne of the Red Letter Christians network.

We were there at the invitation of the Border Network for Human Rights, a grassroots advocacy group that has organized in the borderlands for more than 20 years.

In each of our religious traditions, we minister to families in the midst of marriage and child-rearing, sickness and death, economic hardship and unexpected tragedy. The migrants we met in Juarez have faced challenges that would threaten any family. They shared stories of gang violence, domestic abuse and political turmoil in their home countries, along with the trials of their precarious journeys through Mexico.

These families made it to the border to apply for asylum in the United States. Against all odds, they arrived at their destination only to learn that the Trump administration has implemented a new “Remain in Mexico” program. This policy requires asylum-seekers who have a hearing scheduled in the U.S. to wait across the border in Mexico. 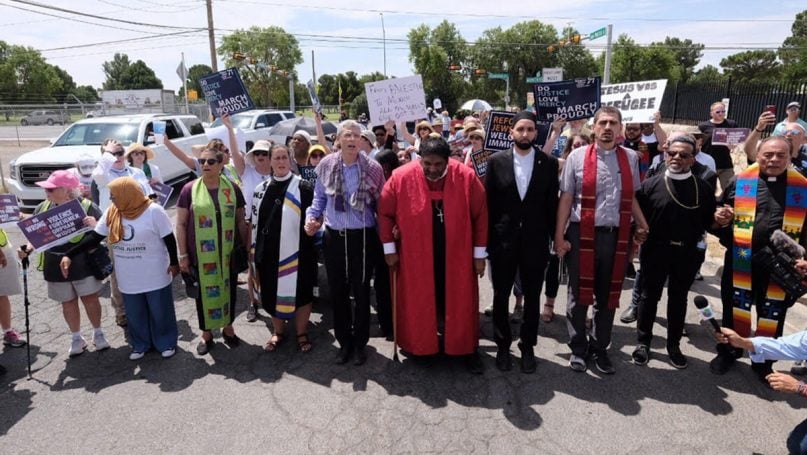 The families we met have hearings scheduled in October and November of this year. Until then, they have been told to find a way to keep their families safe in one of the world’s most violent cities.

The Trump administration’s “Remain in Mexico” policy took effect around the same time Juarez experienced a spike in gang violence.

A year ago, when it was widely publicized that U.S. Customs and Border Protection was separating migrant children from their parents, the public outcry forced the Trump administration to officially change its policy.

Though families continue to be separated, the official policy shifted to incarcerating families together.

This led to the extreme overcrowding and conditions highlighted by members of Congress. They found migrants have been left in processing centers for weeks without access to showers, toothbrushes or a bed. “Remain in Mexico” is the Trump administration’s response to the outcry against this humanitarian crisis.

At the refugee shelter in Juarez, listening to women who held children on their hips while they kept a watchful eye on those old enough to stand, we saw how “Send her back!” was more than a chant to fire up the base at Trump’s campaign rally in Greenville, N.C.

As so often in the history of American racism, the chant was a product of the culture that justifies treating asylum-seekers as criminals.

But the families we met in Juarez are not lawbreakers.

Though they have been portrayed as criminals by an administration that is doing everything in its power to deny them the relief they need, they are doing what American and international law guarantee families a right to do when they face imminent danger at home. They are seeking refuge in a country whose corporations have used the natural and human resources of their homelands to build unimaginable wealth. I was raised in the United States by Christians who emphasized the family values of Scripture and exhorted me to be vigilant in resisting worldly forces that tear families apart.

Before we crossed over into Mexico Sunday morning, I read the biblical exhortation to “keep on loving one another as brothers and sisters.” That passage from Hebrews 13 goes on to say that we practice such family values by showing hospitality to strangers and remembering those who are mistreated “as if you yourselves were suffering.”

I thought about the challenges that my own family and others in our congregation back home face. What would we be doing if a government was using its power to portray us as the enemy? What would I be praying if this were happening to my family?

If the Scriptures are true, this is happening to our family. In the name of “family values,” Christian nationalists have empowered a president and an administration that is assaulting families.

This is not simply a partisan disagreement about immigration policy. It is a moral crisis that forces each of us to decide who we are. Either we accept the demonization of black and brown immigrants that assumes God has ordained white American culture as superior. Or we act now to demand that the Trump administration end its war on immigrant families.

The well-being of thousands of families like those we met in Juarez certainly depends in part on what we decide.

Practice hospitality, Hebrews says, because in doing so some people have welcomed God’s messengers without knowing it. The prophets camped at our nation’s gates invite us to remember who we are and act now to preserve our own humanity.

(Jonathan Wilson-Hartgrove lives in Durham, N.C., where he is an author and founder of the Rutba House, a house of hospitality. His most recent book is “Reconstructing the Gospel: Finding Freedom From Slaveholder Religion.” The views expressed in this commentary do not necessarily reflect those of Religion News Service.)