(RNS) — Gurinder Chadha's movies, beginning with 2002's "Bend It Like Beckham," nearly always find the place where immigrant identities and aspirations run up against realities of politics and faith, friendship and romance. Her latest, the cheeky, exuberant "Blinded by the Light," out Friday (Aug. 16) in the U.S., is the first film she has based on a true story and one not her own, but the ground is familiar. Drawn from the memoir of British-Pakistani journalist Sarfraz Manzoor, it depicts a lost teenager in Margaret Thatcher's Britain finding salvation through perhaps the unlikeliest of saviors — Bruce Springsteen.

Though informed by the British Sikh director's South Asian aesthetic and her experience of Western racial politics, "Blinded by the Light" — and its creator — manage to transcend ethnic or religious stereotypes and turn its serious concerns into pure fun. I had the opportunity to sit with Chadha over tea to discuss her vision for this film and her previous work. This interview has been edited for length and clarity.

Why did this story about a British boy’s love for Bruce Springsteen speak to you?

I loved the idea of telling the British Asian story through the words and music of Bruce. It's a confluence of cultural influences that you wouldn't think would go together. It was the same with David Beckham, soccer and an Indian girl. In whose world would those things come together? The same with Bruce Springsteen and this 16-year-old kid. By taking two extremes and bringing them together, that in itself is a very salient statement about how people try to put us in boxes, yet we’re much bigger than those boxes. 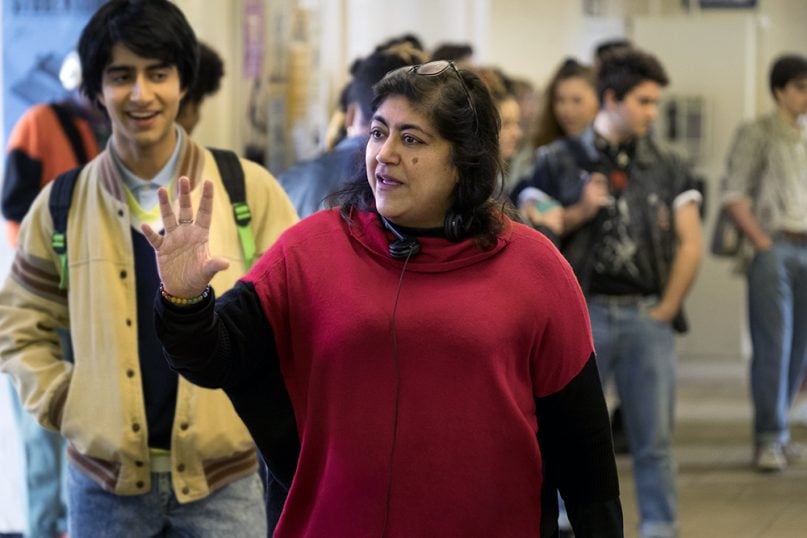 Director Gurinder Chadha on the set of “Blinded by the Light.” Photo by Nick Wall

I was struck by the joyfulness of the film. It had an aesthetic of optimism that I’m not used to, even while it pressed serious social issues. Where did you pull that from?

The thing is, people aren't used to optimism. They definitely aren't used to celebration when it comes to our community’s stories. People typically perceive our stories as problematic and therefore they perceive us as problems. We actually live very joyful, three-dimensional lives. Yes, there is struggle. Yes, there is racism. Yes, there are things upsetting to us, but we aren't entirely defined by that. We still have very full lives with our families, our friends.

RELATED: 'Blinded by the Light' makes a savior of Springsteen

What's fantastic about this particular story is that the kid got his dream, he got everything he wanted. And his story is true! I want to celebrate his story, a British Asian life that was full of complexities that turned out well.

There seems to be power in telling your own story. When other people tell our stories, it's often through a lens of victimization, as if they can't imagine going through what we do without our lives being limited to suffering and pain.

Exactly. It's seen as part of who we are. I know sometimes people struggle with the fact that I am optimistic, but that’s who I am as a Sikh. I choose to be optimistic because I choose not to be cynical. I never knew I was going to be a film director. I didn't know anyone. My parents didn't know anyone. Everything I did and achieved was through sheer willpower. I started my career as a way of combating racism.

And that's what I still do when I tell stories. I want to humanize people, show the universality of all our experiences. I know for a lot of people my film career has been a tremendous relief because I try to offer communities something positive to hold on to. All of this is informed by my Sikhi, my warrior spirit. 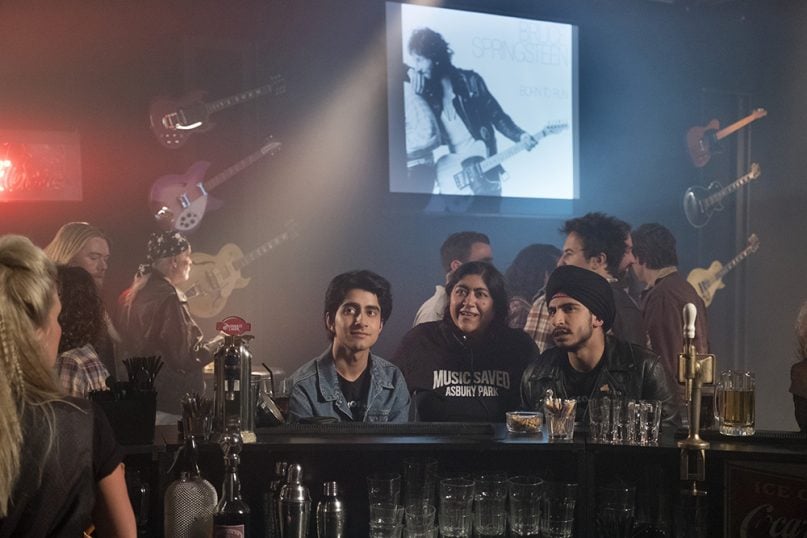 Director Gurinder Chadha, center, with actors Viveik Kaira, left, and Aaron Phagura on the set of “Blinded by the Light.” Photo by Nick Wall

So as a storyteller you give your characters complex identities, but that is also part of your political vision, of combating racism?

Absolutely. People have either told our stories in a two-dimensional way or didn't do it at all. So sharing stories about those who looked like me and my friends and family in all their multifaceted layers was always intended to make us visible, to make us seen, to create a record of history from our own perspective.

This is exactly why I love "Blinded by the Light" so much. It’s a typical story of a British Asian kid looking outwards to fulfill his dream. And the kid happens to be Muslim. His best friend happens to be Sikh. And they happen to find their way through the music of Bruce Springsteen. So this is more than British or Asian or even American. It’s all those things, together, in the same, authentic way that people experience their lives.