Despite being a party that includes Black Protestants, who are some of the most religious Americans, and Hispanic Catholics, one of the few religious groups in the U.S. to be growing, Democrats still have troubles when it comes to talking about faith.

They have struggled to mobilize the religious left into a voting block and have troubles connecting with white Christian voters, the majority of whom supported President Trump in the last election.

And while Democrats do have the support of the so-called “Nones” — the growing group of Americans who have no religious affiliation — that group does not include particularly enthusiastic voters.

Pew Research found that only 17% of voters in the 2018 midterms were Nones, despite the group making up about a quarter of the US population.

While the Nones have grown dramatically over the last 20 years, it’s still important to realize that more than six in ten Americans identify as a Christian, according to the 2018 Cooperative Congressional Election Study.

If Democrats want to win back the White House, it would behoove them to reach out to those Christian voters.

However, at least on social media, Democratic candidates fail to do so.

Recently, I scraped the Twitter accounts of the twenty Democrats who qualified for the first Democratic debate, collecting a total of 58,851 tweets.

I wanted to just look at the most generic religious term: “God.” Given that nearly 90% of Americans believe in a higher power, mentioning “God” shouldn’t alienate many potential voters. However, what I found was surprising. 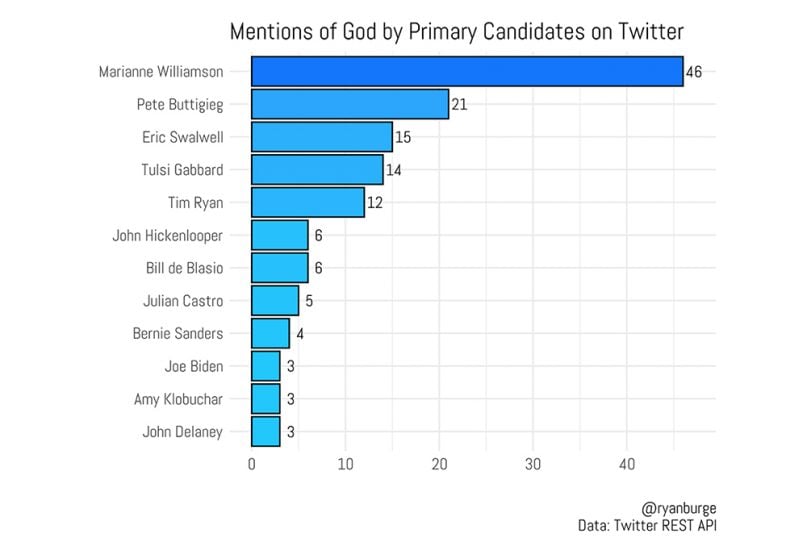 “Mentions of God by Primary Candidates on Twitter.” Graphic by Ryan Burge

In fact, Marianne Williamson, the self-help guru, mentioned God more often than any other candidate. By contrast, Cory Booker and Elizabeth Warren, two candidates who have made it a point to talk about their personal faith on the campaign trail, seem reluctant to talk about God in their tweets.

For instance, Booker’s only mention of God was a retweet, and Warren’s was a mention of a “god-given right.” Neither would likely come across as incredibly genuine by devout Christians.

But what about explicitly Christian language?

If at least 60% of Americans have a belief in Jesus Christ (including Catholics, Protestants, Orthodox, and Mormons), one would assume that mentioning Jesus in a tweet would appeal to a large swath of the electorate.

However, those mentions are nearly non-existent.

There were several mentions of Jesus, but not in a specifically religious context. For instance, Andrew Yang tweeted that he once saw Depeche Mode in concert in 1990 when the opening act was Jesus and Mary Chain. Another was John Hickenlooper posting a picture of Carrie Underwood singing “Jesus Take the Wheel.”

In total, I found four tweets that mentioned Jesus in an explicitly Christian context out of over 58,000. There were two from Mayor Pete Buttigieg and two from Rep. Tulsi Gabbard.

In short, Democrats seem hesitant to mention language that is explicitly Christian, at least on social media.

But, are they more willing to include specific language that mentions another religion, specifically Islam? 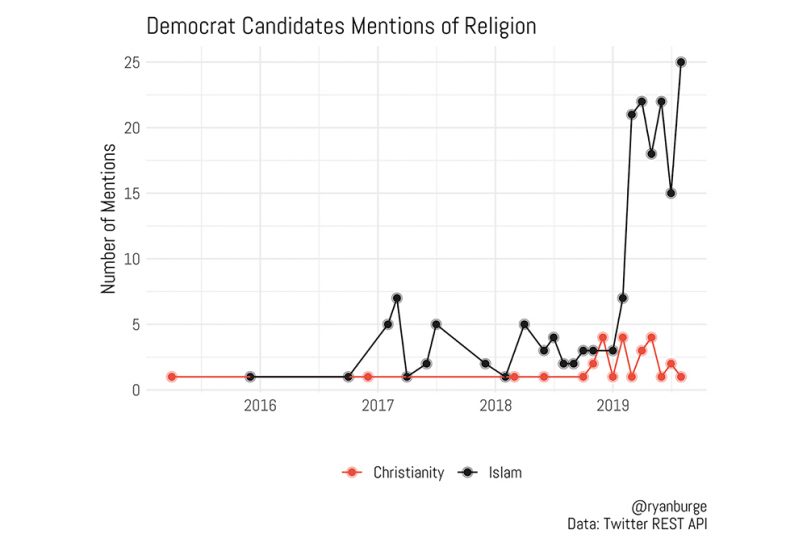 In total, there was one month when candidates tweeted about Christianity more than they did about Islam — December of 2018.

In all other months where both terms appeared, it was clearly Muslims who received more of the discussion. While Muslims are one of the most Democratic-leaning religious groups, they are still just a very small portion of the electorate.

The best estimates indicate that they make up about 1% of all American adults, which places them between Jews and Buddhists in terms on numbers of the American religious landscape. 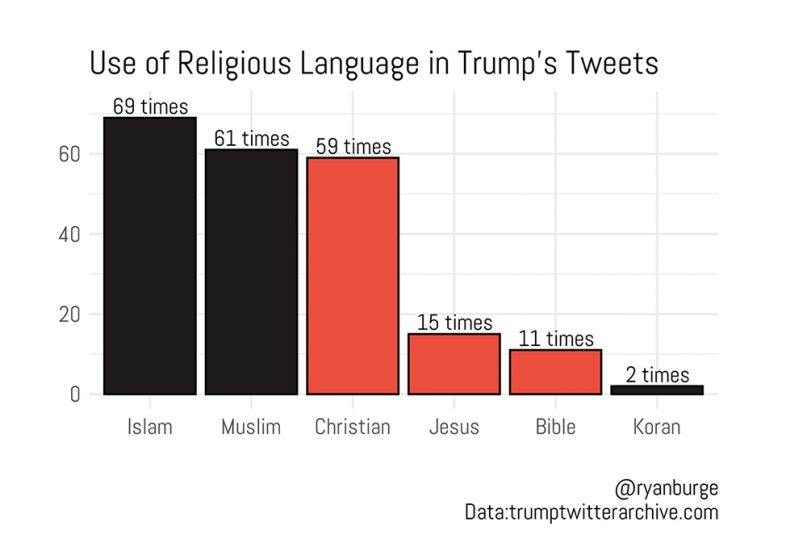 “Use of Religious Language in Trump’s Tweets.” Graphic by Ryan Burge

A possible reason that Democratic candidates are discussing Islam and Muslims so frequently in a positive way is to create a clear contrast between themselves and Donald Trump. I searched through the president’s Twitter archive for a number of terms related to both Islam and Christianity. Clearly, Donald Trump talks more about Islam than he does about Christianity. In fact, he has mentioned “Islam” sixty-nine times and “Muslim” sixty-one times, compared to just fifty-nine mentions of “Christians.”

That could mean that Democratic candidates want to use Trump’s caustic language around Islam as an opportunity to discuss their belief in religious freedom for all religious minorities, many of which are strong supporters of the Democratic Party.

While it would be unwise to extrapolate too much about Democrat candidates’ messaging from their tweets alone, Twitter is clearly a public relations tool. By mentioning people, policies and groups, candidates try to win over parts of the electorate that they need to secure the nomination.

Using that as a guide, it seems completely baffling that the most prominent Democrats would spend so much more time talking about Muslims — a group that makes up 1% of the population — than Christians, who are 60% of the country.

Maybe these leading Democrats believe that discussing protection of religious minorities may win over the votes of other religious (and non-religious) groups. However, this data indicates that Democrats are doing little to explicitly appeal to Americans who identify as Christians.

Prominent evangelical leader Ralph Reed noted in an interview that evangelicals will support Donald Trump in his re-election at least as much as they did in 2016 and maybe even more — it seems that Democrats are doing little to try to create fault lines among them. 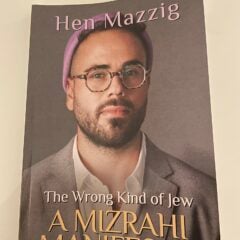