(RNS) — This summer, Sudanese protestors began a strike to pressure the ruling army to hand over power to a civilian government. Next door in South Sudan, fighting resumed between government forces and the militant National Salvation Front. In the Democratic Republic of Congo, conflicts over land intensified and 21 people were killed when a fishing village came under attack.

A new report has found that the number of people internally displaced by conflict around the world is at an all-time high, at 41.3 million. In 2018 alone, conflict forced more than 10 million people to flee their homes. Americans don’t hear about many of these situations, especially as U.S. political battles heat up and the stock market tips precariously between recovery and a downturn. We Americans are also doers. Historically, we want to help others, but how can those of us on the other side of the world — with little cultural knowledge of these places — make a lasting impact?

The short answer is, we can’t. Barreling in with troops or even thousands of eager and well-intentioned philanthropic volunteers is not the answer and may even exacerbate the problem.

But there is a solution that we share with these faraway places, one that sits on many street corners in our downtowns and backroads in our country and theirs: local churches.

While Western aid organizations play an important role in providing emergency health, water and sanitation services to conflict-torn regions, these are short-term solutions to long-term problems. The United States Agency for International Development does valuable work in global health and emergency assistance in the DRC, for example, but violence often limits what it can do. Refugees make maize porridge donated by USAID for South Sudanese refugees in the remote northwestern district of Adjumani, near the border with South Sudan, in Uganda, on Aug. 29, 2016. (AP Photo/Stephen Wandera)

This is why local community organizations are so important to recovery from conflict and development afterward. The best use of resources is to effectively train and engage local churches to act.

For years, World Relief has been empowering local churches in conflict zones across the globe to serve their communities. We train farmers to improve their crops and offer loans through Savings for Life groups. Congregations are coming together to plant gardens for their elderly and send their orphans to school. They host peace dialogues between armed groups before tensions escalate into violence.

It’s not difficult to see why locals are better at bringing about needed change than outsiders. Foreigners identifying as humanitarian workers soon become targets in the dangerous areas they are trying to help. Trusted leaders of local churches are not only less easily attacked; they are in the unique position of being able to identify the specific needs within their communities and the people who are most in need, even if that means going door to door.

Local churches by their nature tend to be involved for the long term. In Darfur, the region in Western Sudan that has been in an ongoing state of humanitarian emergency since 2003, the international community has largely moved on to other crises. Yet the conflict persists, and more than a decade after the onset of this crisis, extensive displacement continues. Local churches are the foundation of sustained and sustainable change in this area and others. 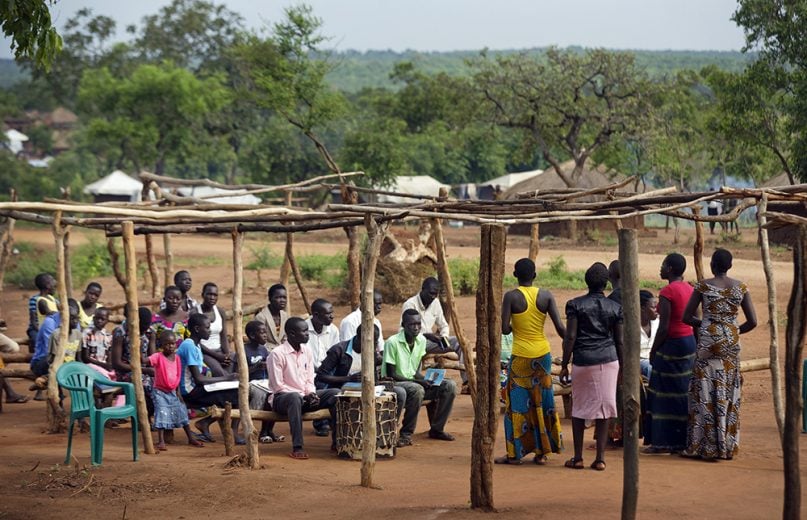 A congregation of South Sudanese Christians sits under an open-air wooden frame as they attend a Sunday service at a pentecostal church in Bidi Bidi refugee camp, in Northern Uganda, on June 4, 2017. (AP Photo/Ben Curtis)

When we empower the local church, we can break the vicious cycle of conflict and poverty that endangers the lives of millions of people. Dialogue becomes a resolution tactic, instead of violence.

Fellowship Missionary Church in Fort Wayne, Indiana, for example, was inspired by World Relief’s work in the Democratic Republic of Congo. In 2017, a small team from FMC traveled to Congo with World Relief staff to learn about local churches’ work with victims of sexual and gender-based violence.

As a result, FMC launched a 14-week fundraising campaign that challenged its congregation to take a cumulative 100 million steps over the summer. Participants were given step counters, devotionals and toolkits with fundraising and community education ideas. The program ended with a 5K prayer walk and a festival. Four hundred members of the congregation ended up raising $80,000 for trauma healing programs in the DRC and helped spread a message of healing across their community.

Global conflicts threaten the lives of millions of people across the globe, whether or not we pay attention. The question of how to resolve these conflicts persists. But first, we need to bring these problems to the attention of the American people. Wide-scale epidemic violence and devastation shouldn’t be relegated to the back pages of our newspapers any longer.