(RNS) — A century ago in Armenia, a curious pre-wedding ritual called for the bride’s mother to travel to the groom’s family home, enter dancing and present a plate of cookies.

Before Natalie Hecht’s August 2019 wedding in Dearborn, Michigan, her mother implemented a modern version of that tradition. Amy Mardigian Hecht baked a batch of Armenian nazook cookies and sent them to the future in-laws for a college football tailgate party.

The cookies were such a hit with the groom’s family, she made them again for Natalie’s wedding. As guests left the ceremony at St. Sarkis Armenian Apostolic Church, they each received a nazook. The sweet/savory confection includes a lot of sugar and butter. (Make it yourself, using Amy’s recipe below.)

RELATED: What ever happened to clergy performing weddings?

While American weddings usually feature the many-tiered and elaborately decorated wedding cake, cookies are the major dessert feature for wedding celebrations in many cultures. An Italian wedding without cookies probably shouldn’t even be considered a legitimate union, according to Betty Sinicropi from Lansing, Michigan.

“Huge platters of cookies are a part of most every Italian wedding,” said Sinicropi. “It’s almost an unwritten law. When the cookies are presented at the wedding reception, it’s not unusual to see guests rush to get as many as they can fit in a folded napkin.” Amy Mardigian Hecht displays some of the nazook that she made for her daughter Natalie’s wedding. Courtesy photo

The cookie ritual starts before the wedding, though, as family members often gather for a massive cookie-baking event, according to Sinicropi.

“Italian families don’t buy all these cookies — they make them,” she said. “It’s really about the love and togetherness in preparation that is impressive. The ‘cookie makers’ will gather in a kitchen and bake all day. Ingredients must be best quality and carefully measured by those present, often aunts, grandmas and other close friends or relatives.”

“We give them to guests, wrapped with a bow,” said Mardigian Hecht. “There are usually five almonds, to represent health, wealth, fertility, happiness and longevity. Sometimes, you’ll see three almonds, that represent the bride, the groom and the future child.”

Mexican wedding cookies — redolent with butter, sugar and cinnamon — are also an important part of a traditional Mexican wedding. Juanita “Janie” Reyes spent the waning days of August in her Houston kitchen rolling dough for her grandson’s upcoming wedding.

“Every time I’ve ever gone to a wedding, we had Mexican wedding cookies,” Reyes said. “I learned how to make them from my mother when I was 5 years old. Now my daughter is helping me bake them and carrying on the tradition.” 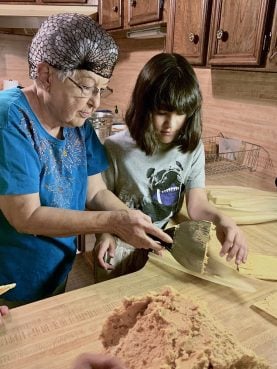 Preparation for wedding cookies is a festive experience not unlike Christmas cookie swaps. That tradition has roots in Europe and is thought to have originated in Holland in the 1600s. The pre-wedding baking events are often an opportunity for families to demonstrate their kitchen cred with secret ingredients.

Mardigian Hecht’s nazook recipe includes the spice known as mahleb, a ground cherry pit used in the Middle East for centuries, often by Chaldeans and Armenians. The only way to ensure quality for Mexican wedding cookies, according to Janie Reyes, is to use Crisco shortening and whole Mexican cinnamon ground just before baking, never powdered cinnamon. “It just doesn’t taste right with commercial ground cinnamon,” she said. (See Janie’s recipe below.)

The cookie itself was a natural progression in the line of grain and water pastes that were originally “baked” on hot rocks in Neolithic times, according to Peter Kelly, associate professor at Johnson & Wales University College of Culinary Arts.

“I think that the cookies served at weddings are a sweet version of the meatballs in zuppa maritata (Italian wedding soup), a coinlike garnish as a wish for prosperity for the couple,” Kelly said. “It may have been easier for people of even modest means to make many, many, small cookies, rather than one, elaborate wedding cake.”

Back in Dearborn, Michigan, Mardigian Hecht figures she did her part to cement a solid relationship with her daughter’s in-laws. The groom’s family consists largely of Michigan State University fans, while the bride’s family favors the University of Michigan. That’s an explosive combination that could easily have been a Hatfields-McCoys situation.

“I’ll tell you what,” Mardigian Hecht said. “They threw an engagement party in May and they asked me to make my nazook and of course I was happy to do that. They had a long table with all the Italian cookies and the first empty plate was my nazook. I think I won them over, and I didn’t even have to come in dancing.” A plate of nazook. Photo courtesy of Creative Commons

Melt butter for the dough and cool slightly, then add and whisk together instant yeast and 1 tablespoon sugar. Let it rise just a little. Add the other dough ingredients together except the flour and butter. Add butter and mix all together. Add flour as needed. Dough will be soft and easy to shape. Divide evenly into quarters and roll each into a ball. Place on parchment-paper-lined cookie sheet and refrigerate overnight.

The next day: Heat the oven to 350 F. Combine all the ingredients for the filling. Generously flour a large clean surface and roll out one dough ball into a rectangle until it’s thin but not transparent — about 19×14 inches. Sprinkle 1/4 of the filling over the rectangle and spread to cover the surface, leaving 1/2 to 1 inch uncovered along the long edges. Start rolling the dough rectangle on the long edge into a tight rope, then flatten it slightly. Cut the rope into about 16 small pieces using a fluted bench cutter, then poke a fork onto the top of each piece. Brush each piece with the egg wash and place the pieces on parchment baking sheet.

Bake 12 minutes, then rotate cookie sheet and bake for 12 more minutes or until golden brown.  Repeat with the other dough balls. Freezes well. Makes 64 cookies. 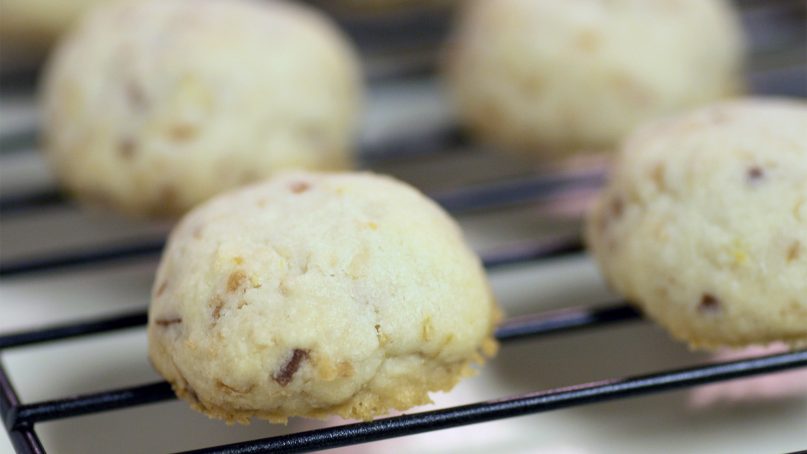 Heat the oven to 350 F. Mix first eight ingredients well by hand, then add flour. Use a mini-ice cream scoop to make small balls. Put dough balls on cookie sheet and squash them. Bake for 20 to 25 minutes. After they cool, roll in a granulated sugar-cinnamon mixture. Makes about six dozen cookies. 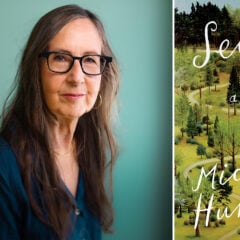 News
‘I have not forgotten you,’ Pope Francis tells migrants in Malta 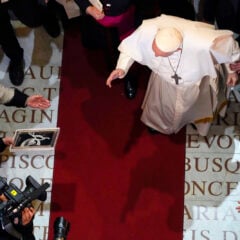 News
Pope Francis backs Catholic and lay anti-corruption efforts in Malta
Follow us on Facebook!
Submit your photos to RNS