WASHINGTON (RNS) — Mark Charles may be the only 2020 presidential candidate who can list working as a Christian pastor on his résumé. But when you ask him how his faith informs his politics, he doesn’t exactly preach.

“I’m a member of a community that has endured genocide, the horrors of (Native American) boarding schools and incredible oppression because some people thought their job was to legislate their theologies and make their nation Christian,” Charles, a Navajo citizen, told Religion News Service in a recent interview. “Read the teachings of Jesus — that was never his goal. I’m a Christian, yeah. But I am not trying to make my nation Christian. I’m not trying to legislate my theology.”

Indeed, Charles is loathe to pierce the boundary between church and state: “I’m deeply convinced both the church and the nation will be healthier when the two get out of bed with each other.”

Even so, the consultant, advocate and Washington, D.C., resident has a lot to say about religion. In fact, Charles’ critique of American history, particularly American religious history, is a big part of why he launched his campaign for president in the first place — and why he’s running as an independent.

RELATED: Mark Charles and the need for ‘creating common memory’

He does not appear overly concerned with the traditional hallmarks of campaigning since launching his bid for the Oval Office in May. When asked a complex question, he rarely resorts to sound bites, choosing instead to offer a complex answer over the course of several minutes (even his announcement video was nearly nine minutes long). For his (nearly two-hour) interview with RNS, he wore a T-shirt and sat in a busy dining spot in Washington, but not once did he stand up to shake hands or talk politics with any of the hundreds of people who meandered by, nor did any patrons outwardly express any knowledge of who he was or his campaign for president.

However, Charles — who once pastored a Christian Reformed Church for two years — is absolutely serious about his campaign and very concerned about the plight of America’s poor and marginalized, particularly Native American communities. He explained that the decision to run for president came after he organized an event in Washington in December 2012 to draw attention to an apology to Native Americans written into the 2010 Defense Act.

Charles was frustrated by what he saw as poor attendance at the gathering, but he remained committed to highlighting issues important to Native American communities and other marginalized populations.

“I’ve come to the conclusion that the United States of America needs a national dialogue on race, gender and class,” he said. “It’s a conversation I would put on par with the Truth and Reconciliation commissions of South Africa, Rwanda and Canada. I’d call it truth and conciliation because reconciliation implies there was a previous harmony, which is inaccurate.”

Then came the 2016 election cycle. Charles found himself especially impressed with the campaign of Sen. Bernie Sanders, whom he credited with helping trigger a national awareness about economic inequality.

Suddenly, Charles had an idea.

“Every four years we have a dialogue about who we are and where we’re going — that’s our presidential election cycle,” Charles said. 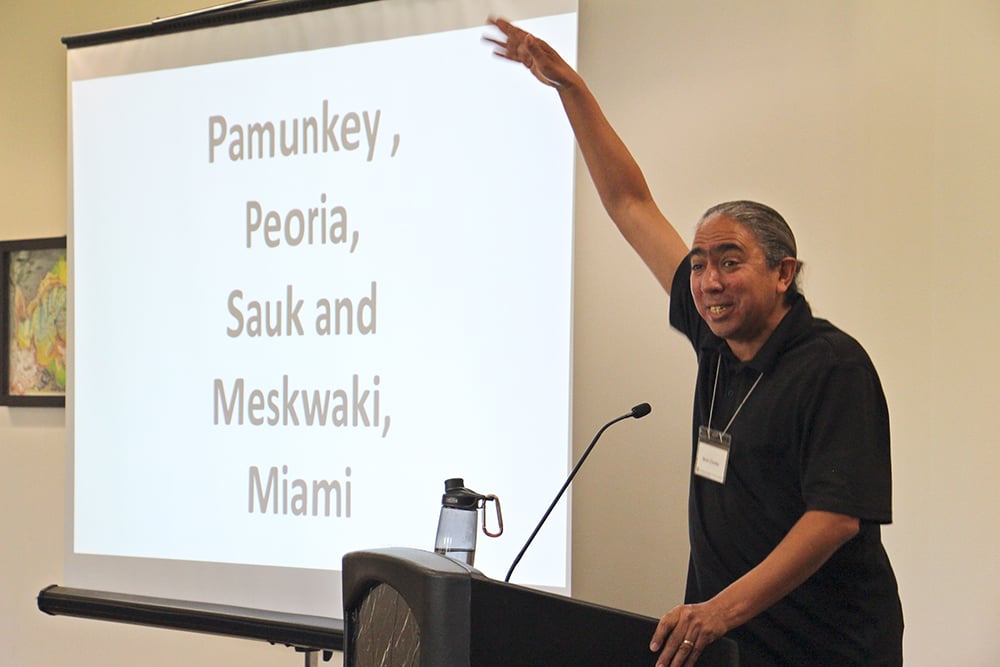 Mark Charles — a Navajo pastor, speaker and author — discusses the Doctrine of Discovery to a room full of missionaries in the Evangelical Lutheran Church in America, gathered July 26, 2018, for their annual meeting at the Loyola University Retreat and Ecology Campus in Woodstock, Ill. RNS photo by Emily McFarlan Miller

His candidacy comes as indigenous activism in the United States is on the upswing, bolstered by major spirituality-infused protest movements such as the opposition to the Dakota Access Pipeline on the Standing Rock Sioux Reservation.

Even so, Charles insists he is not a protest candidate. He said his independent status is a necessity, because he believes a candidate with his agenda would never win the primaries in either major political party.

“If I were running a protest campaign, I’d be running as a Democrat,” he said. “I could raise more money and I could maybe get into the debates. I could change the dialogue, but I would never be nominated.”

One of Charles’ core campaign issues is his fierce, long-standing criticism of the Doctrine of Discovery, which he addresses in his forthcoming book “Unsettling Truths: The Ongoing, Dehumanizing Legacy of the Doctrine of Discovery.” He said his fascination with the doctrine emerged out of his experience pastoring the Denver Christian Indian Center in Colorado, where the mostly Native American congregation pushed him to contextualize worship for indigenous cultures.

“The question we began asking as a church is: What does it mean to be Navajo and be Christian?” He said. “How does our language, our culture, our understanding (of) the sacred affect or even dictate the way we worship and follow Christ?”

This spiritual exploration eventually led him to confront the Doctrine of Discovery, a concept that dates back to the 15th century when a series of papal bills laid out the theological justification for European colonizers to conquer lands held by non-Christian indigenous populations and subjugate the inhabitants. Charles has lectured extensively on the subject and wrote about the concept at length for Red Letter Christians, a progressive Christian group and website.

“The governments, churches and people of the United States of America and Canada do not talk about the Doctrine of Discovery,” he wrote in 2016. “We have removed it from our common memory. Instead we talk about our common ideals, or about our stated values for equality and justice. Or we remain silent.”

The Doctrine of Discovery has played a significant role in framing the legal structure of the United States. In 1823, Supreme Court Chief Justice John Marshall, writing for a unanimous court in Johnson v. M’Intosh, extensively referenced discovery in a ruling adjudicating two men with competing land claims — one procured from the federal government, and another procured from a Native American tribe. Marshall’s opinion held that only the federal government can purchase land from Native Americans. Because the United States holds absolute title to the land through discovery, Marshall wrote, the Native Americans hold merely title of occupancy, which the United States possesses the exclusive right to acquire from them. The Doctrine of Discovery was often cited by courts thereafter, including in the Supreme Court by Justice Ruth Bader Ginsburg in 2005.

Discussion of the document has increased among Native American communities in recent years, especially in activist contexts. During a Native American presidential forum in August, the first question — asked to candidate and spiritual author Marianne Williamson by Marcella LeBeau of the Cheyenne River Sioux Tribe — referenced the impact of the Doctrine of Discovery.

When Charles spoke at the forum the following day, he began by spending several minutes discussing the doctrine, noting that none of the previous candidates had addressed LeBeau’s reference to it.

“You are not the only one who this has happened to,” he said, speaking to LeBeau. He explained that Native American academics and filmmakers have spent years trying to get political leaders “to wrestle with this Doctrine of Discovery,” but “nobody wants to take on that burden.”

He added: “But we keep asking.”

Some Christian groups have formally rebuked the Doctrine of Discovery in various ways, including members of the more than 500 interfaith clergy who visited the prayer camps in 2016 to express support for Native Americans opposing the Dakota Access Pipeline. But Charles said verbal rejections of the doctrine are not enough, and he recalled a conversation he had with one of the people who organized the rebuke at the camp.

“I said, ‘I’m curious: Did anyone give any land back?’ The Doctrine of Discovery is the basis for land titles. If you’re going to repudiate the doctrine, you should give some land back,” he said.

Charles expressed similar frustrations with the political rhetoric of both parties. He argued that not only does President Donald Trump’s campaign slogan “Make America Great Again” whitewash history, but so too did Hillary Clinton’s 2016 retort that “America never stopped being great.”

“When you have this sort of dehumanization happening at the systemic level — the white supremacy, the racism, the sexism — these become bipartisan values,” he said. “The difference is between explicit and implicit: ‘Make America Great Again,’ or ‘America is already great.’ They both agree the past — history — was great. It wasn’t. It sucked.”

Ultimately, Charles said, he understands his pursuit of the White House is, at best, a long shot. But he hopes to lean on the Native American vote, holding his initial campaign stops primarily on Native American reservations and indigenous sites. According to his campaign, if he organized every Native American over the age of 18 in the country, that alone would be enough to put him on the ballot in every state.

Charles insists, though, that his focus isn’t just on Native American issues, but also on building a nation that is more inclusive, and more whole.

“We don’t have a common memory,” he said. “We have the white majority that remembers the mythological history of discovery, expansion, opportunities and exceptionalism. Then you have communities of color, women and LGBTQ people that have the lived history of stolen lands, broken treaties, slavery, Jim Crow laws, segregation, sexism, exclusion, boarding schools, internment camps and families separated (at) our borders. There’s no common memory, and because of that, community is almost nonexistent at a national level right now. We can’t even talk to each other.”

He added: “The theme of my campaign is, I want to build a nation … where for the very first time ‘We the people’ truly means all the people.”