(RNS) —  Last week, CBS’ afterlife sitcom “The Good Place” debuted its fourth and final season. The story of four recently departed, morally in-between millennials (and one soft-hearted demon), “The Good Place” is at once a story about religion and about secular morality: an ironically fantastical story about what it means to live in a time of moral and theological uncertainty.

Back when the show started, our anti-heroine, bona fide Bad Person Eleanor Shellstropp (Kristen Bell), had just been killed in a freak shopping cart accident. Due to what appeared to be a case of mistaken identity, she was assigned not to the richly deserved Bad Place but to its Stepford-suburban opposite: a peaceful Good Place in which, it seemed, everybody was far more Good than she was, especially her prescribed soulmate, Chidi (William Jackson Harper), a neurotic moral philosophy professor, and her neighbors Tahani (Jameela Jamil), a lifelong philanthropist, and Jason (Manny Jacinto), a Buddhist monk.

Eleanor spends most of the first season trying desperately to hide the fact that she’s not a good person, corralling Chidi into teaching her philosophy and becoming an actually better person along the way. 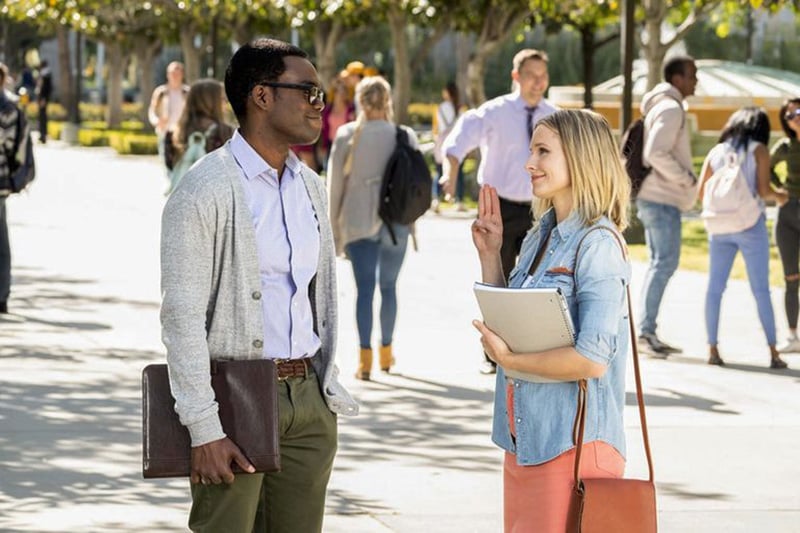 William Jackson Harper, as Chidi, and Kristen Bell, as Eleanor, in “The Good Place” on NBC. Photo courtesy of NBC Universal

Only — spoiler alert for those still on season one — the whole thing was a setup. They were in the Bad Place all along. Their shared imposter syndrome was a form of punishment. Each of them was, according to the rules of the afterlife, a Bad Person. Upstanding Chidi lets his neurosis get in the way of the needs of others. Tahani’s philanthropic acts mask profound self-loathing and solipsism. And Jason isn’t a Buddhist monk at all but is instead a pathologically vacant stoner from Florida.

Over the show’s second and third seasons, our heroes explore the Bad Place, the Medium Place, and Earth itself, trying to find a way first to get into the Good Place and then — when all hope seems lost — stop others from going to the Bad Place by preaching a gospel of morality — albeit one that’s largely denuded of specific content: people are Good in “The Good Place” because they are good friends, because they put others first.

This theology — in which its heroes realize the failure of the existing system and advocate for its change — is a perfect fit for a millennial culture that increasingly demands a role in shaping the religious identities they are offered. Today’s millennials are looking for belief systems that are more individualistic and personally rooted than established institutions, and they tend to reject rules in favor of emotional authenticity and intuition.

But Eleanor and her outcasts become Good, too, for a more of-the-moment reason: because they deal with their own personal traumas and put the past behind them. They’re getting not just morality but therapy. 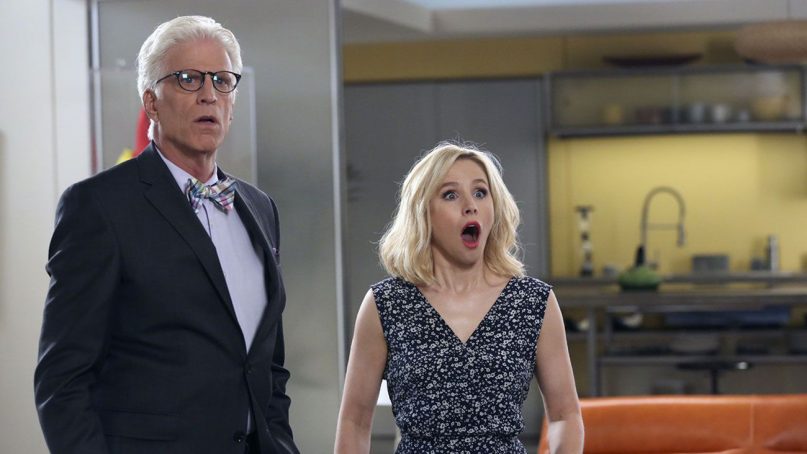 Ted Danson and Kristen Bell on “The Good Place” on NBC. Photo courtesy of NBC Universal

Eleanor learns to contend with the trauma wreaked upon her by an absent and irresponsible mother who has left her with a life-long fear of vulnerability and commitment. Tahani, who has always lived in the shadow of her more successful artist sister and her disapprovingly imposing parents, learns to love herself without comparing herself to others or seeking outside validation.

Being a better person, on “The Good Place,” comes from being a more emotionally healthy person.

Late in the third season of “The Good Place,” we learn a vital piece of the show’s theological puzzle. Nobody gets into the Good Place — or at least, nobody has for centuries. The complications of modern life — the fact that buying a bunch of roses for your elderly mother means you’re supporting an environmentally unhealthy industry, the fact that every purchase you make supports an exploitative system of global capitalism somewhere in the world — mean that being a good person is, according to the rules of the afterlife, impossible.

The answer? Our heroes fight to change the system entirely: demanding to prove that people can get better in an environment like the (Bad) Good Place itself — one without such an arbitrary points system.

Millennials — both religious, “spiritual but not religious,” and non-religious — see the creation of a meaningful life as an opportunity to make their values known, rather than submission to tradition. If rules and dictates seem unfair, they should be changed — even if they seem to come from higher powers than themselves.

This makes more sense when we understand that millennials don’t separate goodness from wellness: the healing of emotional trauma and personal self-betterment — you might call it the creation of a best self. 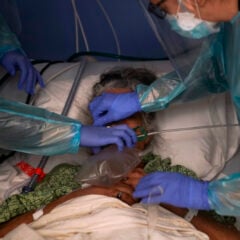