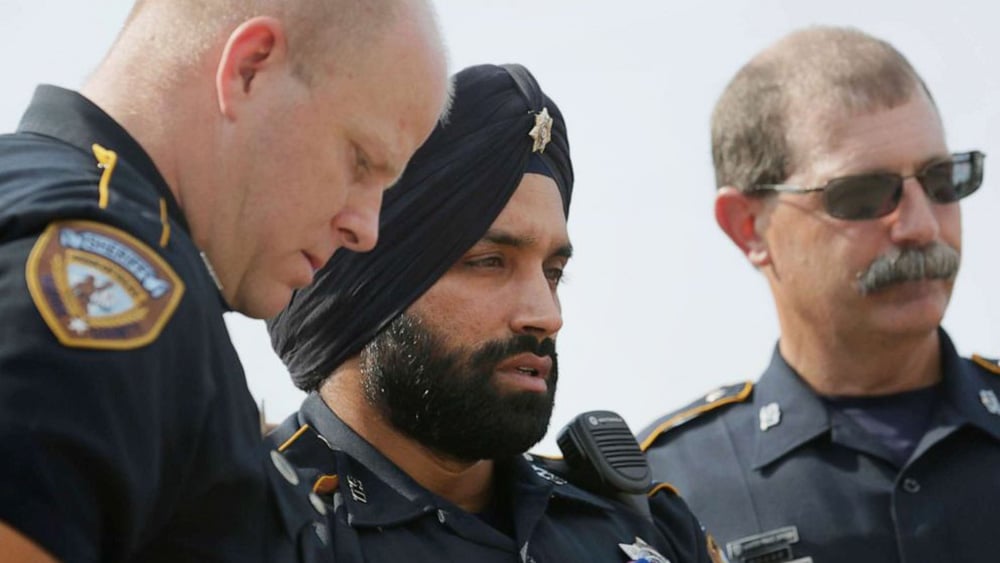 In this Aug. 30, 2015, photo, Harris County Sheriff's Deputy Sandeep Dhaliwal, center, grieves with Deputies Dixon, left, and Seibert, right, at a memorial for Deputy Darren Goforth, at the Chevron where he was killed, in Houston. (Jon Shapley/Houston Chronicle via AP)
October 2, 2019
Simran Jeet Singh

(RNS) — As his family lays him to rest on Wednesday (Oct. 2), let's remember that the horror and sadness of last week's shooting of a Houston deputy sheriff began 10 years ago in pride and happiness. In 2009, Sandeep Singh Dhaliwal became the first Sikh to serve as a deputy in the Harris County Sheriff's Office. In 2015,  he made international headlines when he was granted the right to keep serving with his turban and beard intact.

To many, including many in minority communities beyond Dhaliwal's own, it represented the beginning of a new era, in which police agencies would finally begin to address some of the tensions with marginalized Americans. The simple updating of law enforcement and military uniform policies that were perhaps unintentionally but no less powerfully discriminatory seemed to announce a sincere reckoning with exclusion in the ranks. Dhaliwal was seen as a harbinger of this change.

Dhaliwal made international headlines again last week. During what seemed like a routine traffic stop in Houston, Dhaliwal was ambushed from behind and murdered in cold blood.

Police are still investigating to see if the killer saw Dhaliwal’s turban and beard and felt motivated to kill him out of bigoted hate. We may never know for sure, but the very fact that this is a question everyone is asking offers insight into what it is like to look different in modern America.

Dhaliwal leaves behind a wife and three young children. He also leaves a beautiful legacy that continues to touch hearts all around the world. Photos and videos of him playing with children have gone viral over the past few days. A chorus of voices from the Houston area — colleagues, congregants and political leaders —have attested to his impact on their local community. People from around the world have shared how he touched their lives.

This outpouring of love is not random. It makes sense considering the purpose with which Dhaliwal lived. 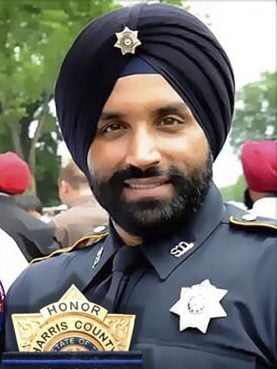 This photo provided by Harris County Sheriff's Office shows Deputy Sandeep Dhaliwal. The funeral for Dhaliwal, a Texas sheriff’s deputy who was fatally shot during a traffic stop, was held Oct. 2, 2019, at the Berry Center in Cypress, near Houston. Dhaliwal, who was slain on Sept. 27, 2019, was the first Sikh deputy on the force. (Harris County Sheriff's Office via AP)

I met Dhaliwal once and spoke with him over the phone only a few times, yet I consider him a friend. He had an infectious charisma, charming all those he met with his unique combination of kindness, respect and sincerity. It’s only in the past few days that I learned he referred to everyone he met as “my friend.”

The message he repeatedly shared with me when we met, as well as in our subsequent conversations, was that he felt blessed with everything in his life and all he wanted was to serve others. He frequently used the word seva, the core Sikh idea of loving, selfless service.

I learned that he had left a lucrative job in trucking in order to join the police force. He felt it would be a way for him to make seva a central focus of his life. When he told me he had figured out how to do this, he beamed.

He also told me about his father, who had served as a police officer in India. Dhaliwal truly felt that he was carrying on a family tradition, embodying the best of who he understood his father to be.

Finally, Dhaliwal told me about an incident that helped spur him to take on the mantle as the state’s first Sikh officer to wear his turban and beard. In 2008, another deputy responded to reports of a robbery at a Sikh family’s home and ended up putting the whole family in handcuffs. Both the Houston Sikh community and the Harris County Sheriff’s Office felt horrified by this incident, yet relieved that it did not turn out worse.

Both resolved to improve the relationship – and it was in this context that Dhaliwal decided to take the responsibility on his shoulders of creating awareness, forging a new relationship and, ultimately, building trust.

All of this was part of how Dhaliwal viewed his personal mission.

The most remarkable part to me is that he did all of this with an acute awareness of the risks he was taking. Former Harris County Sheriff Adrian Garcia, who helped implement the uniform change that allowed Dhaliwal to wear his turban and who was personally very close to Dhaliwal, told me that the deputy embraced the opportunity knowing full well that he would be a target.

“As officers, we’re already vulnerable every time we put on our uniforms. Sandeep would be even more vulnerable with his turban and beard, because of ignorance from the general public and even from our own department.”

Dhaliwal listened intently to Garcia’s concerns and told him he would speak with his wife. It took them only one day to decide. Dhaliwal welcomed the opportunity to join the sheriff’s office and help open up doors for others.

Dhaliwal’s life, as well as his death, reminds me of a short poem in Sikh scripture by Bhagat Kabir.

O Kabir, dying and dying, the world is dying. But no one even knows how to die. Whoever dies, let them die in such a way that they never die again.

Dhaliwal embodied this so well. He knew how to live – with service — which meant he also knew how to die.

That’s precisely why he touched so many lives and why people around the world remember him today. It’s why his legacy will live on with us forever. And it’s why our friend, Deputy Sandeep Singh Dhaliwal, will never die again.