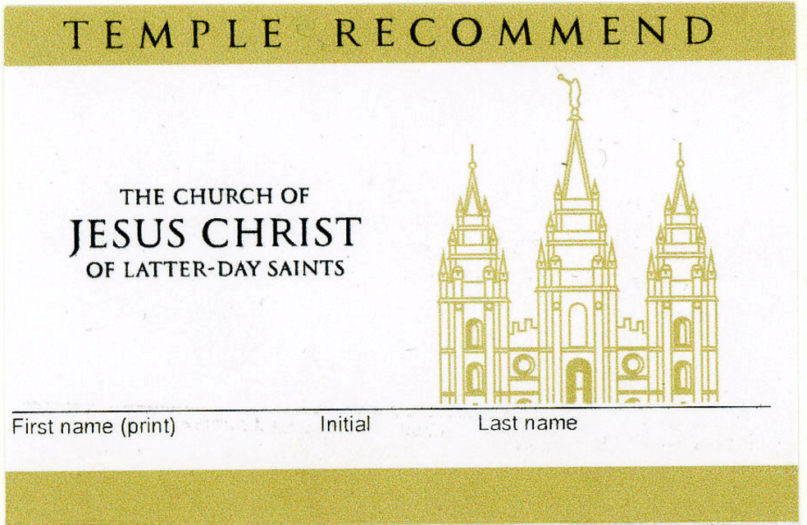 (RNS) — At the 189th General Conference of the Church of Jesus Christ of Latter-day Saints, one of the many changes announced was to the temple recommend interview, or TRI, involving more than a dozen questions that the faithful have to answer before obtaining permission to enter one of the church’s holy temples.

There are some minor wording changes to nearly every question — “Christ” to “Jesus Christ,” for example — and eliminating the sexism that was embedded in the question about being honest with one’s “fellow men.” (Did that mean it was permissible to be dishonest to women?)

But in addition to those small changes, there are potentially major adjustments to the following questions. In two separate posts this week, I’ll parse what these five changes may or may not mean.

The church has also sent a letter to local leaders with a reminder that:

“ … they should not omit, add to, or modify any of the temple recommend questions. However, they may adapt the discussion in an interview to the understanding of the member and respond to his or her questions, especially with youth and new members. As directed by the Spirit, they may teach basic doctrine and correct principles. They should not present personal beliefs, preferences, or interpretations.”

To my knowledge, the specific line about not presenting personal beliefs or preferences is new, though it’s similar in tone to the previous instruction that interviewers “should not add to or remove any requirements” than those in the official script.

This guidance about not presenting personal interpretations as gospel truth may be especially important given some ambiguities in the five areas outlined above.

The chastity question that has been in the TRI since the 1970s has been simple and direct: “Do you live the law of chastity?” The addition of context about all things being “done in cleanliness” is interesting. In an era when many are pushing the church to scrutinize some of the more damaging aspects of purity culture, the vagueness of this statement may be problematic.

The church’s definition of the law of chastity has been to restrict your sexual relations to the one person of the opposite sex to whom you are legally married.

Seems simple enough: Don’t screw around. As such, it has been possible for people to answer “yes” to that question without debating the question’s intent or interpretation. Even if they struggled with, say, impure thoughts, they were still obeying the law of chastity so long as they were not having sex outside of heterosexual marriage. Is that still the case? Is behavior still what matters most?

The idea behind the new TRI question seems to be that we need to be striving for “cleanliness” in both thoughts and behavior. On the face of it, I think this could adhere more carefully to the spirit and not just the letter of the law; after all, Jesus in the Gospels was just as concerned about our inner thoughts as he was about our outward behavior.

The new emphasis on striving for what the church considers moral cleanliness, in theory, allows for the idea that everyone is moving toward a goal, and that as long as we’re making progress toward that goal and have an earnest desire to be chaste, we are worthy to enter the temple.

However — and this is a big however — the question also opens the door for, ironically, a heightened level of legalism. I’ve read with interest these past two weeks as people have worried aloud that this question may allow local leaders to deny individuals a temple recommend because of lustful thoughts or viewing pornography, and not because they have actually had sex outside of marriage. The additional instructions that local leaders have received seem to preclude them asking any follow-up questions along these lines, but frankly those instructions have been given because leaders do sometimes take a hard-line approach and/or invade members’ privacy.

A version of this question entered the recommend interview back in 1940, when church leaders were concerned about members who had fallen prey to the teachings of contemporary polygamists. According to Edward Kimball’s history of temple admissions standards, LDS leaders wanted to avoid any possible ambiguity on the question of whether plural marriage was permissible, and they chose to do this by preventing recommend-holding members from affiliating with fundamentalist groups. (For a fascinating overview of changes to the TRI process, read Kimball’s Journal of Mormon History article here.)

The fact that polygamy was never explicitly identified as the driving force behind this question has led to widespread confusion, however. I’ve heard of individuals who have been turned down for a recommend simply because their social-media posts indicated a sympathy for LGBTQ rights or women’s ordination. In the absence of data, it is difficult to ascertain how widespread such denials might be — my educated guess would be not very — but it’s a sad case of “bishop roulette” when it does occur.

The new wording is not much of an improvement in terms of clarity. “Support or promote” is possibly even vaguer than “affiliate with,” since at least affiliation implied that you had to join a group or befriend its members, not merely to think it might have merit. On the other hand, the addition of “promote” implies a higher standard of evidence: It would not be enough to agree with a teaching that the church had denounced.

But what does “promote” mean, especially for the individuals I mentioned above, whose Facebook posts about social issues have been used to exclude their temple participation? Is this going to foster a public/private split, in which the church only allows members to disagree with its positions as long as they don’t talk about that disagreement?

Bottom line: I worry about this one.

Later this week, a follow-up post will address the issues of Sabbath, Word of Wisdom and temple garments.