Donate to RNS
Support our work
(RNS) — This weekend in Pittsburgh and across the country, Americans remembered the 11 Jewish worshippers who were killed and seven others who were injured by a gunman at the Tree of Life Synagogue.

Tragically, the attack, though the worst act of anti-Semitic violence in U.S. history, was far from an isolated event. Hate is on the rise in the United States, documented by the annual increase in reported bias-related crimes over the past three years and illustrated all too graphically by a string of shootings targeting ethnic and religious minorities dating back at least to the attack on a Sikh gudwara in Oak Creek, Wisconsin, in 2012.

As a Sikh and a person of faith, I know that hate cannot answer hate. Yet as we move on from this anniversary, I’m also increasingly convinced that it is simply not enough to both engage those who are fearful of us and summon our forgiveness for those who commit these acts of violence.

I urge all Americans to come together in care and compassion for Jewish communities across our country and advocate for real action to stop the scourge of hate.

It is time for us to act with force and conviction.

First, we must invest in education. Children are not born with hate in their hearts; they learn to fear those who are different from them from the example set at home and from the people, fictional and not, whom they see on television. Educating our children about different cultures and about diversity from an early age and championing anti-bullying initiatives is essential to addressing the problem. Informing our children about the people they see as “other” will have the additional benefit of giving our country a well-informed and well-adjusted citizenry to lead our country into the future. 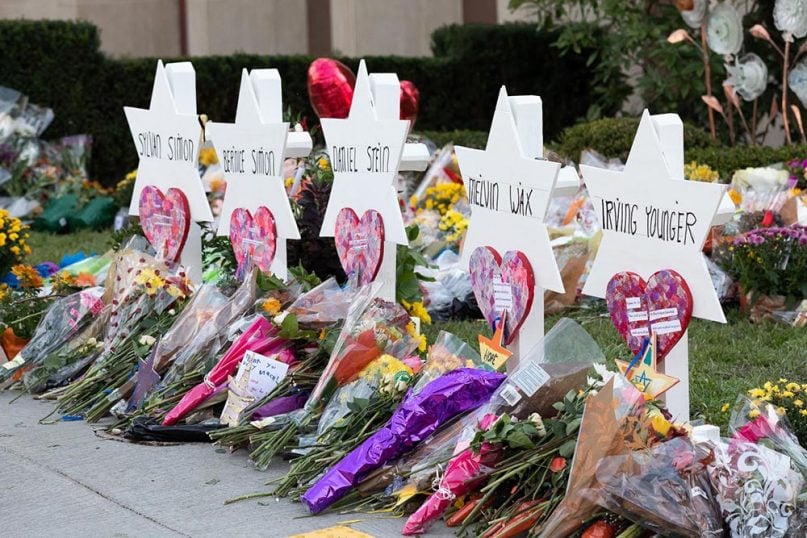 A memorial outside the Tree of Life Synagogue in Pittsburgh on Oct. 30, 2018. Official White House Photo by Andrea Hanks/Creative Commons

Second, we must push our government to act. Late last month, the Department of Homeland Security finally recognized white supremacy as a domestic terrorism threat. That’s a good start. But while we don’t need big, expansive laws that could hurt communities too often targeted by our inherently biased justice system, we must see more concerted action by the executive branch to reverse recent trends that have deprioritized funding and bureaucratic structures dedicated to answering this challenge.

As for Congress, our lawmakers must advance the bipartisan Khalid Jabara-Heather Heyer NO HATE Act, the next generation of common-sense legislation that will equip law enforcement to identify and track hate incidents more effectively.

Government action is needed at the state level as well.  Four states still have no hate crime laws on the books. Many others have inadequate protections that fail to cover all threatened classes of hate crimes or don’t adequately equip law enforcement to respond to and report bias-related incidents. Hate crime laws need to be strengthened to train law enforcement and make reporting of hate crimes to federal agencies mandatory to ensure that vulnerable communities feel safe to come forward.

These changes can be achieved through bipartisan action, as is currently happening in Pennsylvania’s General Assembly; other critical state legislatures are expected to join together across aisles next year. Protecting our neighbors need not be a contentious issue.

Finally, we must look to our leaders, and to each other, to condemn prejudice and discrimination in all its forms. Few among us disagree that white nationalism is wrong, but too many see its root causes — namely racism and bigotry — as easy to excuse or uncomfortable to denounce. Our society won’t be free of hate until each of us makes a conscious effort to drive it out of our acquaintances, our loved ones, and ourselves.

Together, we can answer this challenge. We should be inspired by the resilience of the Jewish community in Pittsburgh and so many other groups who have suffered horrific losses. We have as a model this country’s legacy of decades of fighting for civil rights. We know what action we must take to rid ourselves of hate. The time to act is now.

(Pardeep Kaleka is executive director of the Interfaith Conference of Greater Milwaukee and co-founder of Serve2Unite, which works to divert young people from violent extremist ideologies. He lost his father, Satwant Singh Kaleka, in the 2012 attack on the gurdwara (Sikh house of worship) in Oak Creek, Wisconsin. The views expressed in this commentary are not necessarily those of Religion News Service.)