CHICAGO (RNS) — This Thanksgiving, 5,888 families in Illinois’ Cook County will receive a card with the names of several congregations belonging to different Protestant Christian denominations throughout the city of Chicago and these words:

“Have a wonderful Thanksgiving. We want you to know that all your debts have been forgiven.”

Together, they paid off $5.3 million in medical debt for “the poorest of the poor” — many in the city’s South Side neighborhoods of Englewood, Auburn Gresham, Washington Heights, Roseland and West Pullman, according to the Rev. Otis Moss III, senior pastor of the historic Trinity United Church of Christ. Trinity UCC, a congregation of 8,500 founded in 1961 in Washington Heights, is the largest congregation in the UCC and counts former President Barack Obama among its past members.

“We believe this is a moment of Jubilee for our community — a moment of Jubilee for our nation, where we reset the moral compass of our nation and for some of our churches that have lost their way in reference to the waves and the undertow of our current political situation in this nation,” Moss said at a celebration announcing the churches’ donation Sunday, Oct. 20, at Trinity UCC.

RELATED: Christian leaders call for Day of Prayer in support of impeachment inquiry

The pastor said the idea came several months ago from a conversation he had with the Rev. Traci Blackmon of the UCC. The two were discussing how they could engage their communities and “plotting some holy mischief” when the conversation turned to an article in The New York Times about a nonprofit called RIP Medical Debt.

“I thought, ‘What an incredible program! Instead of allowing debt collectors to purchase the debt, why not have communities of faith purchase that debt and forgive that debt?” Moss said. 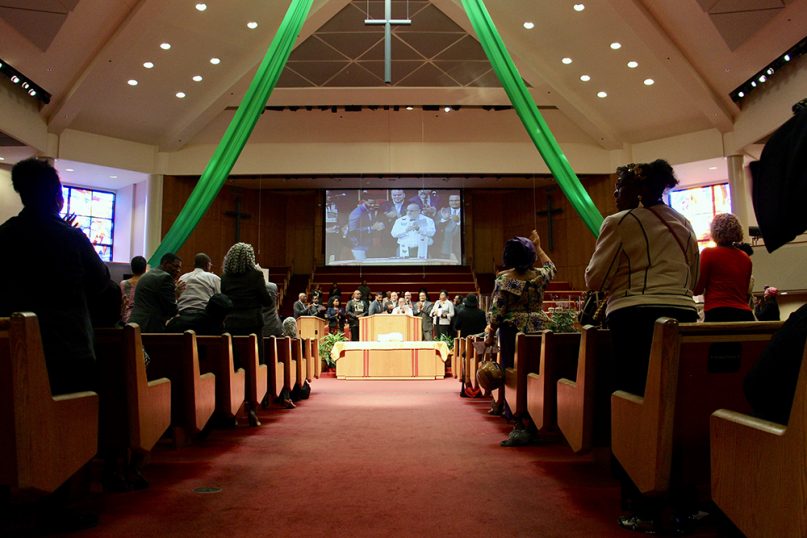 Leaders of Chicago churches announce they have purchased and paid off $5.3 million in medical debt for Illinoisans — mostly on Chicago’s South Side — through a nonprofit called RIP Medical Debt at a buyout celebration Sunday, Oct. 20, 2019, at Trinity United Church of Christ in Chicago. RNS photo by Emily McFarlan Miller

For every dollar Chicago churches donated, RIP Medical Debt was able to purchase and abolish about $142 worth of debt, according to Blackmon, the UCC’s associate general minister of justice and local church ministries. The average amount of debt they “forgave” was $970, she said, which cost the churches just $7, allowing their donations of $38,000 to cancel the more than $5 million of debt.

“I’m glad that we could do it, but there’s absolutely no reason why people should be held hostage so that other people can be enriched on their backs,” Blackmon said.

The Chicago churches join a growing trend of congregations paying off medical debt for the people in their communities and beyond.

At least 18 other churches have done the same from the start of 2018 to the end of May 2019, forgiving $34.4 million in debt through RIP Medical Debt.

Emmanuel Memorial Episcopal Church in downstate Champaign, Illinois, paid off $4 million in debt for southern and central Illinois residents with the $15,000 surplus it had raised for building repairs and upgrades to mark the church’s centennial earlier this year.

Pathway Church, a nondenominational church with several locations in and around Wichita, Kansas, spent the $22,000 it had budgeted this spring for Easter to instead pay off $2.2 million in debt.

Other churches — including congregations in Indiana, Maryland, Michigan, Missouri and Texas — have taken up special collections for RIP Medical Debt.

Even comedian John Oliver paid off nearly $15 million in medical debt through the nonprofit in an episode of his HBO show “Last Week Tonight” (though not on behalf of the satiric televangelism ministry he also started for another episode of the show, Our Lady of Perpetual Exemption). 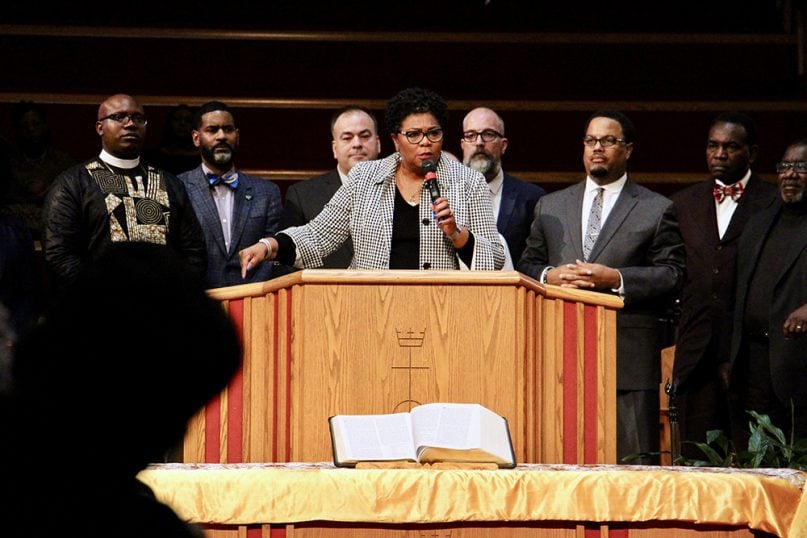 Joe Antos, a health care policy scholar for the conservative American Enterprise Institute, raised red flags for congregations wanting to pay off medical debt for their members earlier this year in an article in Christianity Today.

They are “well-meaning,” but, Antos told Religion News Service, “Generally churches do not have expertise in health financing.”

RIP Medical Debt co-founders Craig Antico and Jerry Ashton do. Both had worked in debt collections for years until realizing who was impacted and how “destructive” it was for them, Antico said.

“It became abundantly clear: Why don’t we do what we did with our business life and just do it for good?” Antico said.

RIP Medical Debt, which was founded in 2014, purchases “portfolios” of medical debt from health care providers and from the secondary debt market at an average $1 for $100 of medical debt, according to its website.

Those providers sell the debt at pennies on the dollar to try to recoup some of the cost of those unpaid bills. Usually, those who buy that debt then continue to bill people for it.

RIP Medical Debt instead abolishes the debt, with no tax consequences or strings attached for the recipients, according to its site.

The New York-based nonprofit brought in just $3,000 in its first year, according to Antico.

But donations exploded after RIP Medical Debt appeared on “Last Week Tonight,” he said. It quickly raised $250,000, and donations have continued to grow since then.

Antico said he expects the nonprofit to raise $10 million this year and cross $1 billion total forgiven in a matter of weeks — the goal it set when it started, he said.

“It’s nonpartisan or non-political, and Republicans, Democrats, progressives can all agree on this,” Antico said.

“And churches — they all agree that their mission is to help their people get through hard times and be resilient and let people start over again and know that they’re supported. I think that’s the key here: They care so much about people and their community and that’s why it’s resonating.”

The Chicago churches hope their efforts will inspire other churches to do the same in their communities.

“This is not one time. We want to see movement of debt relief,” said Moss of Trinity UCC. “Instead of people preying on individuals, we want to see people relieved of that debt so they can go about their business and realize the dreams that God has placed in their heart.”

The Rev. Matt Fitzgerald, senior pastor of St. Paul’s United Church of Christ in Chicago’s Lincoln Park neighborhood, said his church was “proud” and “delighted” to join other churches in the city for this purpose.

“In this particular historic moment, when it seems like white Protestants are doing everything they can to drive our country right off the edge, but also to ratchet up evil and injustice, it feels very good and it is very good to stand and say, ‘No, there’s a better way to be the church,’” he said.

Members of New Mount Pilgrim Missionary Baptist Church in the West Garfield Park neighborhood also “leaped at the opportunity to be part of this movement,” according to its pastor, the Rev. Marshall Hatch.

After pointing out the gap in life expectancy between residents of his neighborhood and the city’s affluent Loop, Hatch said, “Our funds were collected from people who needed help themselves, but who saw this as an opportunity to help somebody else.”

“We believe medical doctors and medical staff can open opportunities for healing, but only God does the healing, and nobody should go into debt for the healing God does,” added Hatch, who also co-chairs the board of the Leaders Network on the West Side of Chicago. 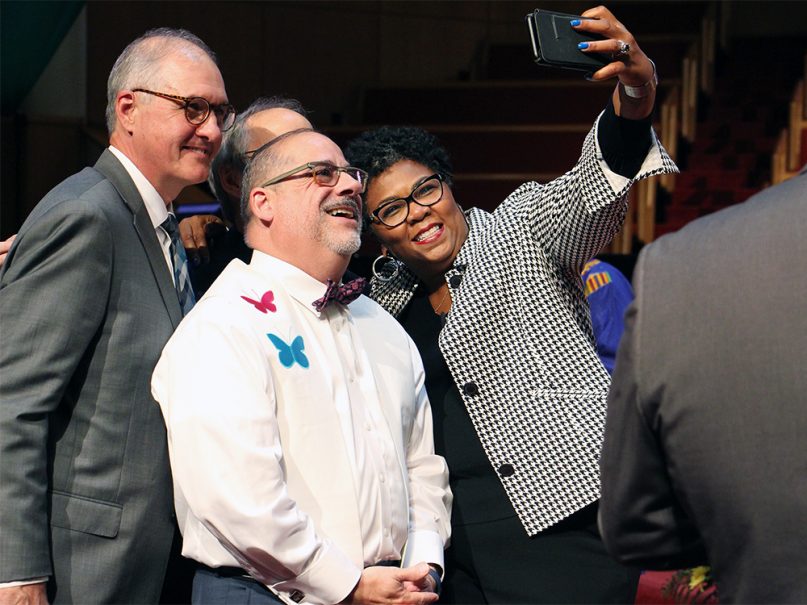 UCC churches across the country will make medical debt relief the focus of their Giving Tuesday campaigns on Dec. 3, Blackmon announced.

“This is not the end. This is the beginning. We are using this as a sacred launching pad in the United Church of Christ,” she said.

The churches also hope it will turn a spotlight on healthcare as a justice issue for Christians voting in the 2020 presidential election, Blackmon said.

“We stand here not just as gifters, but as agitators. 2020 is an election year, and we are going to demand that health care costs be brought under control in this country,” she said.

Earlier in the celebration, the Voices of Trinity choir had sung, “Let’s do the work / Let’s live out the purpose of the church.”

This is what the church does, Blackmon said as the celebration came to a close.

“The letter says, ‘Happy Thanksgiving. Your debt is forgiven,’” she said.

“It also says something else. … The letter lists the churches, and it says, ‘You may never enter the doors of any of our churches, but we love you because we are the church, and, more importantly, you are beloved by God, and because of that love, your debt is forgiven.’”

A previous version of this story incorrectly stated that Trinity UCC was the first black church in the UCC. RNS regrets the error.