(RNS) — As the U.S. bishops gather for their annual meeting in Baltimore next week, they might take a page from the Vatican’s recently ended synod on the Amazon region.

There are six major differences between the synod, which met in Rome Oct. 6-27, and the U.S. Conference of Catholic Bishops’ three-day meeting, which starts Nov. 11.

First, the Amazonian bishops and the U.S. bishops are very different in experience, style and outlook.

The Amazon bishops come from large but poor dioceses with few priests and lots of people. Being a bishop in the Amazon is not an especially high-status job in the church.

Many of these bishops don’t bother wearing clerical garb and tend to get their shoes muddy visiting their people. They also are attacked for prophetically defending the rainforest and their preferential option for the poor. They are firmly on the side of Pope Francis.

American bishops, on the other hand, live comfortable middle-class lifestyles. Many are bulging in their clerical attire and are more interested in the culture wars than in helping the poor.

I would guess that about a third of U.S. bishops are enthusiastic supporters of Pope Francis; another third hope he goes to his eternal reward so the church can get a real pope; and the final third is simply confused, having grown up under Popes John Paul II and Benedict XVI and not sure how to understand Francis.

Pope Francis speaks during the opening session of the Amazon synod at the Vatican on Oct. 7, 2019. Francis opened the three-week meeting on preserving the rainforest and ministering to its native people as he fended off attacks from conservatives who are opposed to his ecological agenda. (AP Photo/Andrew Medichini)

Second, the synod met for three weeks in Rome in the presence of Pope Francis. The USCCB will meet in Baltimore for three days without Francis.

Third, before the synod met in Rome, there was a wide consultation process that allowed thousands of people in the Amazon to make known their ideas and concerns.

There was no similar consultation with U.S. Catholics before the upcoming meeting, even though in the past U.S. bishops successfully consulted experts and the laity before writing their pastoral letters on peace and the economy.

They clearly know how to consult the faithful; they just don’t want to.

Fourth, besides the bishops, Pope Francis invited laity and experts to participate in the synod. 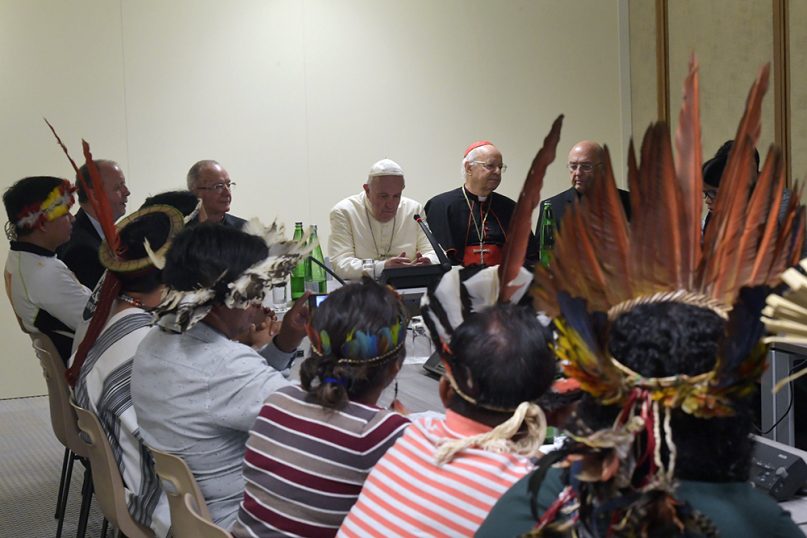 Pope Francis meets with a group of about forty natives, including participants in the Amazon Synod, on Oct. 17, 2019. Photo by Vatican Media

Although these men and women (many indigenous) could not vote, they participated in every other way, giving speeches to the assembly and participating equally in small-group discussions. People in the synodal hall said that the bishops paid more attention to the input of these lay persons than they did to curial cardinals.

Fifth, the synod focused on three issues that are critical to the Amazon and its people: the protection of the rainforest, the human rights of indigenous people and inculturating Catholicism in the Amazonian context.

The USCCB needs to focus on similar topics pertinent to the United States.

The U.S. bishops have still not had an extensive discussion of how to deal with global warming and other issues described in the pope’s 2015 encyclical, Laudato Si. Climate change is the most important moral issue of the 21st century, and the bishops’ cursory attention to it is unacceptable. The Amazonian bishops made clear that, no matter what they do, unless developed countries, especially the United States, change their lifestyles, the rainforest and the planet is doomed.

Given the damage that cattle do to the environment, could the bishops bring back meatless Fridays and abstinence from meat during Lent? Could we in liturgical ceremonies stop using gold and diamonds, whose mining has such a disastrous impact on the environment and indigenous peoples? Are the bishops willing to divest extractive industries from church portfolios as recommended by the synod? Can the U.S. church become carbon neutral? Can the lobbying power of the church be used to support policies to stop global warming?

All of these questions should be discussed at meetings of U.S. bishops.

Nor is it right for the bishops to remain silent when the Trump administration drops the protection of human rights from its foreign policy goals. The bishops have criticized Trump’s policies in press releases, but they have not put the same resources behind these efforts that they have given to abortion, gay marriage and religious freedom.

The U.S. bishops also need a serious discussion of how to inculturate Catholicism in today’s multicultural America. The current liturgy is not connecting with young people, who find most Sunday services boring. The obsession with abortion, gay marriage and the rights of the church is turning off the young, who see the church aligned with white evangelicals and supporting the Republican Party. The bishops need to discuss how to implement Francis’ 2013 encyclical on evangelization, Evangelii Gaudium, in the U.S. context. 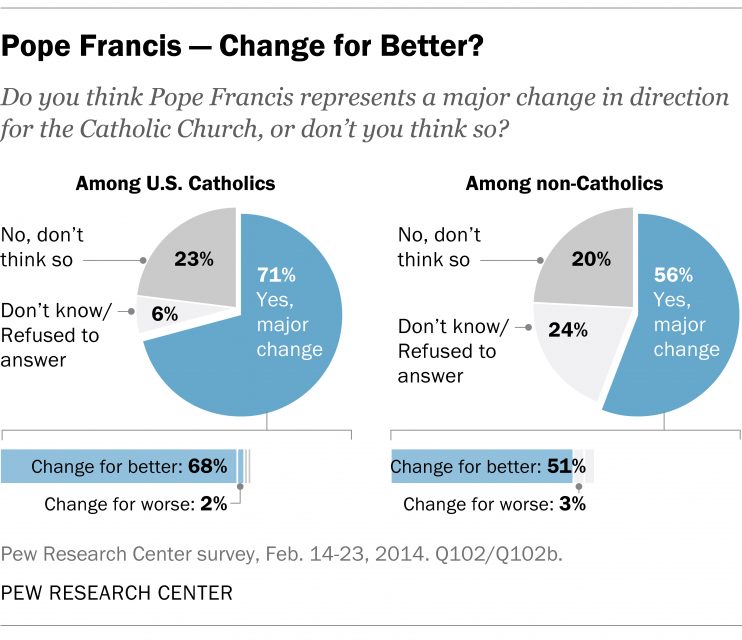 As a first step, the bishops need to get permission to use the 1998 ICLE translation of the Mass, which is much better than the one in current use. There should also be an open discussion of married priests and women deacons as there was at the synod, though, despite the support of  nearly 70 % of American Catholics for married priests, according to a CBS News poll, I doubt that the U.S. bishops are willing to have that discussion.

Lastly, the synodal process also has lessons for the U.S. bishops.

For Francis, synodality involves having conversations where listening is more important than speaking. It involves listening to the people of God and each other. It is a discernment process that involves prayer and humbly seeking God’s path together. It is a process where facts matter and ideologies must be put aside. It is a journey that begins with each bishop in his diocese, but continues when the bishops meet and then has a life after the meeting.

The synodal process is more important than any document. It is a way of being church.

I have been covering synods of bishops since the first synod on the family in 1980, although I have not been to every one of them. The most recent synod was the best by far in terms of openness of discussion and the willingness of the bishops to look for new ways of dealing with issues. The participants spoke from their personal experience of what they had seen done to the rainforest and indigenous peoples. They were not interested in debating the fine points of theology but in finding pastoral solutions to real problems, like the absence of the Eucharist in many parts of the Amazon.

I fear that the U.S. bishops are not ready to follow the synodal path. Too many conservatives believe that if we simply return to the old ways of doing things, everything will be fine. They are stuck in the past and imprisoned by ideologies that will not let them think outside the box. These are the ones waiting for Francis to die so that a new pope can get the church back in order.

Progressive bishops appear to have given up on the conference. Those who were nominated to run for USCCB president refused to run. They have little confidence in the conference as it is currently operating. They do not have the votes for a change in direction, so they have chosen to ignore the conference and focus on their own dioceses and what is happening in Rome.

At their meeting in Baltimore, the bishops will discuss a document on priestly formation, but until the bishops are willing to blow up their seminaries and send their seminarians to study at Catholic universities alongside lay students, they will continue to create a clerical caste that is out of touch with its peers.

Seminaries also need to be staffed by competent faculty and spiritual directors who are on board with the direction that Pope Francis is leading the church. Too many young American priests oppose Pope Francis.

One good thing will happen at the meeting in Baltimore. Archbishop José H. Gómez, who is the USCCB vice president, will be elected president. For the president of the U.S. bishops conference to be a Mexican immigrant sends a message not only to Hispanic Catholics but also to the Trump administration, which has demonized immigrants and refugees.

I wish I was wrong, but the meeting of the USCCB will be nothing like the synod of bishops. That is too bad, but it reflects the state of the U.S. hierarchy.