CHICAGO (RNS) — Earlier this year, the United Methodist Church’s top court upheld much of the Traditional Plan, strengthening the denomination’s language barring its LGBTQ members from marriage and ordination.

But questions about that plan — and a number of regional annual conferences’ dissent to it — still dominated the Judicial Council meeting this past week in suburban Evanston, Illinois.

“The matters before us are neither academic nor abstract. They are where we and the church live,” Bishop Kenneth H. Carter, president of the denomination’s Council of Bishops, said during an Oct. 30 public hearing, according to United Methodist News Service reports.

The Council of Bishops had asked the Judicial Council to decide the “constitutionality, meaning, application and effect” of several petitions adopted as part of the Traditional Plan by a special session of the General Conference, the denomination’s decision-making body, held in February in St. Louis.

The denomination’s rulebook, the Book of Discipline, states that “the practice of homosexuality is incompatible with Christian teaching” and that “self-avowed practicing homosexuals” cannot be ordained as ministers, appointed to serve or be married in the church.

The plan also bars bishops from consecrating, ordaining or commissioning “self-avowed practicing homosexuals,” even if they have been elected or approved by the appropriate church body. It prohibits those church bodies from approving or recommending them as candidates, as well. 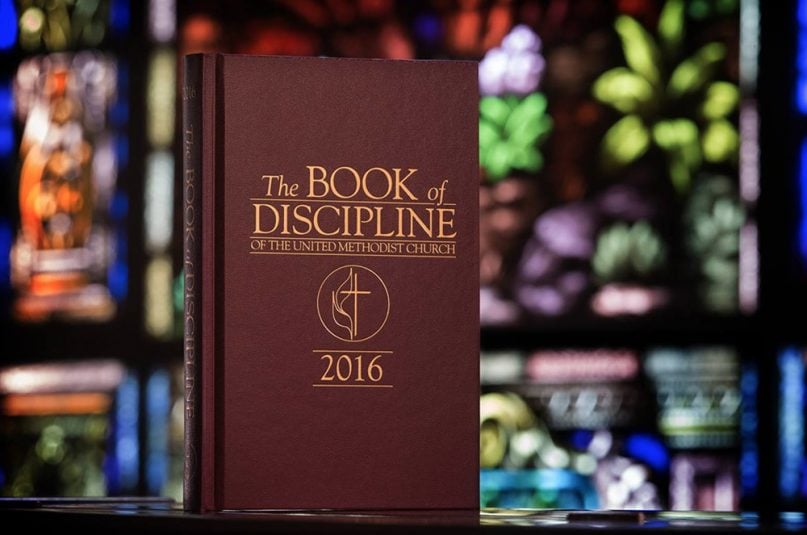 The Book of Discipline contains the rules that guide the United Methodist Church, including its judicial process. Photo by Mike DuBose/UM News

It also strengthens current complaint procedures and penalties in the Book of Discipline. A clergy member who performs a same-sex wedding will face a minimum one-year suspension without pay for the first offense and a loss of credentials for the second.

In April, the Judicial Council ruled that much of the plan that was passed was constitutional. But the denomination’s bishops still have questions about how it should be implemented.

For now, the court did not issue an opinion.

But it did confirm a part of the plan that allows churches to leave the denomination with their property took effect immediately at the close of the special session in February.

The legislation has been controversial because of allegations of improper voting during February’s special session of the General Conference.

In August, the Commission on General Conference determined that four people may have voted using the credentials of delegates who were not at the special session.

Those allegedly invalid votes are significant since the legislation allowing departing churches to keep their property were approved by a two-vote margin. The Judicial Council said it will wait until its session ahead of next year’s General Conference to decide whether the improper voting means that vote should be invalidated. 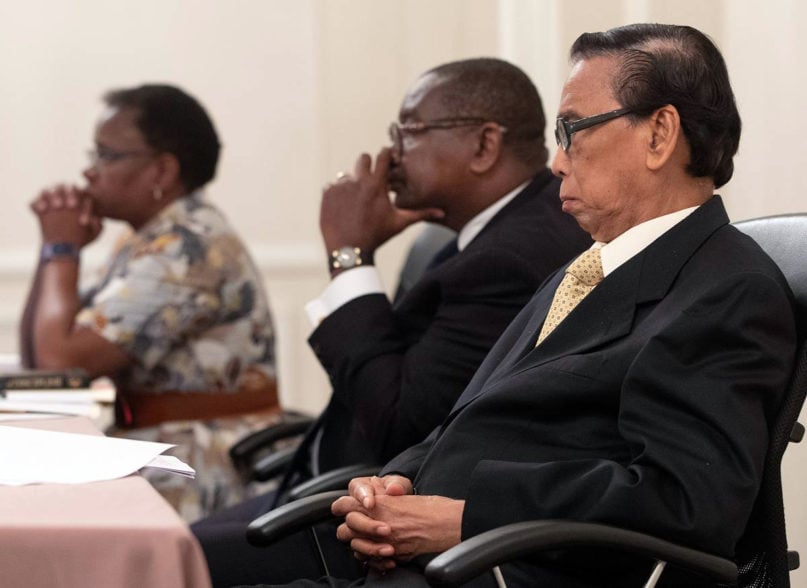 Members of the United Methodist Judicial Council listen during an oral hearing at their meeting in Evanston, Ill. From left are: the Rev. J. Kabamba Kiboko, N. Oswald Tweh Sr. and Ruben T. Reyes. Photo by Mike DuBose/UM News

During a hearing, the Rev. Thomas Lambrecht, vice president of conservative advocacy group Good News and one of the authors of the Traditional Plan, objected that the plan was being scrutinized by the court for a fourth time, according to UMNS.

“If we continue to raise these issues, it gives the impression that people are not willing to accept the outcome of General Conference,” he said.

Lambrecht told Religion News Service after the court’s rulings were announced that he felt “positive” about their decisions, which he said “reflect a balanced understanding of church law and have the benefit of not further creating conflict or confusion in the church.”

Several plans proposing an amicable split in the denomination have been proposed leading up to the global meeting next May in Minneapolis.

In the meantime, a number of moderate and progressive United Methodist groups in the U.S. have vowed to resist the Traditional Plan. Those groups include the LGBTQ-affirming Reconciling Ministries Network, which has urged its members to “stand your holy ground.”

In a statement released over the weekend, Reconciling Ministries said the Judicial Council’s rulings “leave the Church with little direction and in continued tumult.

“In the absence of decisive direction from the Church’s highest court, RMN affirms the groundswell of resistance against codified LGBTQ discrimination already springing forth around the connection,” it said.

Many of the requests before the court this past week had to do with actions recently passed by various regional annual conferences across the country dissenting to all or parts of the Traditional Plan.

The Mountain Sky Annual Conference — which includes Colorado, Montana, Wyoming, Utah and one church in Idaho — resolved that its members “cannot and will not comply with the strict requirements of the Traditional Plan.” The court ruled that resolution unconstitutional.

The California-Pacific Annual Conference similarly resolved it “will not conform to, comply, or cooperate with any provisions of the Traditional Plan, unconstitutional or otherwise.” The court also ruled that unconstitutional.

The Upper New York Annual Conference declared the Traditional Plan “unacceptable” and called on the 2020 General Conference to adopt a plan that creates an expression of Methodism that allows for both “traditional” and “progressive” understandings to exist within the denomination. The court rejected part of its action that strongly recommended the conference refrain from spending money on background investigations, clergy trials and other actions regarding LGBTQ ordination and marriage.

The Eastern Pennsylvania Conference declared it “considers itself a ‘One Church’ Conference in spirit.” That’s a reference to the unsuccessful One Church Plan, which had been supported by the Council of Bishops and would have allowed churches and annual conferences to decide whether to allow LGBTQ clergy and same-sex marriage. The court ruled it did not have jurisdiction since “no formal decision of law was made,” according to its decision.

The Alaska Annual Conference submitted a list of questions regarding withdrawing from the denomination. The court said it did not have jurisdiction to answer those questions, calling them “hypothetical, speculative and advisory in nature,” according to its decision.