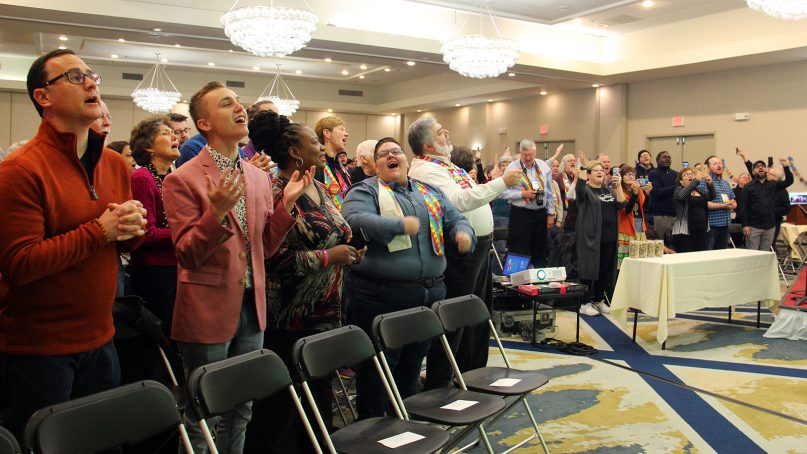 Attendees sing during a service hosted by the Love Your Neighbor Coalition at the Holiday Inn in St. Louis on Feb. 27, 2019, the morning after the special session of the UMC General Conference closed. RNS photo by Emily McFarlan Miller

ST. LOUIS (RNS) — “We’re in this to the end,” sang LGBTQ United Methodists and their allies.

They prayed. They hugged. They pulled out more chairs as people packed a worship service hosted by the LGBTQ-affirming Love Your Neighbor Coalition on Wednesday morning (Feb. 27) in a meeting room at the Holiday Inn, a day after a three-year-long push to make their church more inclusive had been blocked.

Many at the worship service committed to staying in a denomination that voted Tuesday (Feb. 26) to reiterate language in the Book of Discipline, its rulebook, saying LGBTQ people could not marry or be ordained in its churches.

“Our work is to live like that Book of Discipline no longer exists and to be the church,” said the Rev. David Meredith, an Ohio pastor who has faced denominational discipline hearings since he married his longtime partner in 2016.

“Let us not step back from challenging, resisting, everything — ignoring the book so that we can simply be beloved children of God and the beloved people of God,” Meredith said.

The 864 delegates to the United Methodist Church General Conference, the global denomination’s decision-making body, passed the Traditional Plan, the most conservative of three plans proposed, with 53 percent of the vote.

The plan strengthens the enforcement of language regarding LGBTQ United Methodists written into the rulebook in 1972 that states that “the practice of homosexuality is incompatible with Christian teaching” and that “self-avowed practicing homosexuals” cannot be ordained as ministers, appointed to serve or be married in the church.

The special session of the General Conference, it was hoped, would allow the church to move forward together despite deep, decades-long divides over the inclusion of its LGBTQ members. The three plans were presented by a specially appointed Commission on a Way Forward that delegates had approved when their regular 2016 meeting came to a stalemate over the debate.

The options also included the One Church Plan, recommended by the denomination’s Council of Bishops, that would have allowed individual churches and regional conferences to decide whether to ordain and marry LGBTQ people. 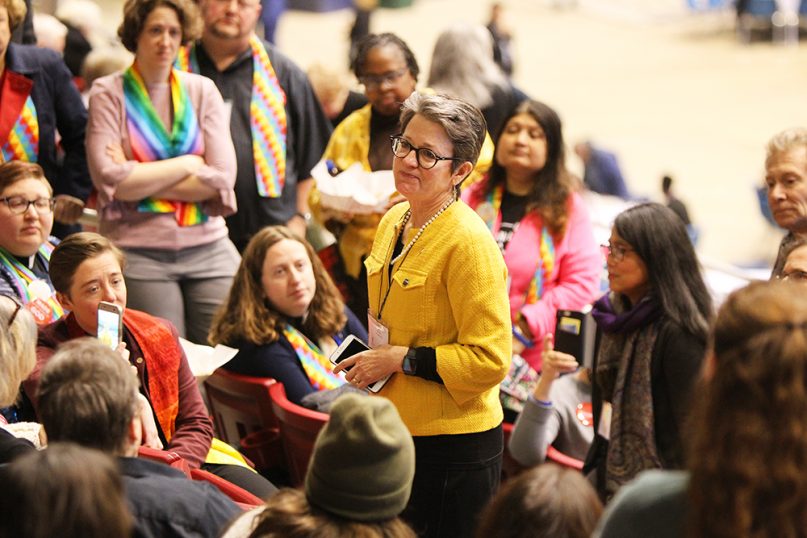 Bishop Sally Dyck addresses constituents during a break of the special session of the UMC General Conference on Feb. 26, 2019, in St. Louis. RNS photo by Kit Doyle

But LGBTQ United Methodists and their supporters still see reason for hope.

In April, the Traditional Plan goes to the denomination’s top court, the Judicial Council, which already has found parts of it to be unconstitutional. Not all of those parts were able to be amended by delegates before they approved the plan.

The Rev. Jeff Greenway — chair of the conservative Wesleyan Covenant Association, which advocated for the Traditional Plan — told the United Methodist News Service he worries the plan as approved by the General Conference has “no teeth” and “little likelihood of accountability.”

RELATED: Grieving, but not leaving, the United Methodist Church (COMMENTARY)

And the Rev. Mark Holland — a delegate and executive director of Mainstream UMC — which advocated for the One Church Plan, called the Traditional Plan’s passage merely a “symbolic victory” in a post on the Mainstream UMC website.

“In reality we passed no legislation at General Conference. … We are essentially at status quo,” he said.

After $3.7 million to put this week’s meeting together and a wrenching three days of deliberations, in other words, the United Methodist Church has only marginally more clarity on its future than when the meeting began.

But the vote still hurt many who support a full welcome of LGBTQ members. Two people hug each other in worship during a service hosted by the Love Your Neighbor Coalition at the Holiday Inn in St. Louis on Feb. 27, 2019. RNS photo by Emily McFarlan Miller

Jen Ihlo, a delegate from the Baltimore-Washington Conference, said it is hard for her to believe the Judicial Council “will do the right thing,” she said. “But we’ll see.”

Numb and exhausted after the General Conference, Ihlo said she came to the Love Your Neighbor Coalition’s worship service Wednesday because she needed to be with her community. She needs to rest and recover from the exhaustion before she can decide what to do next, she said.

“I was baptized and confirmed in the United Methodist Church, but that church doesn’t seem to exist anymore. It’s judgmental. It’s divisive, it’s harmful. And that’s not what Jesus preached,” she said.

“That was why I needed to be here. And that’s what I was hoping for and fighting for as a delegate.” The Wesleyan Covenant Association Council also met Wednesday and Thursday to analyze the decisions made by the General Conference and determine its next steps.

Before the vote, the Rev. Keith Boyette, president of the WCA, had said he would recommend the association leave the United Methodist Church and form its own denomination if LGBTQ members were permitted to become clergy and marry.

On Wednesday, Boyette said, such a split was “unlikely.” But a split is not always a bad thing, he said, pointing to examples in the Bible when people parted ways. He had submitted legislation calling for the dissolution of the denomination, he added, though it ultimately was not included in the legislation considered by the special session.

But few delegates and observers opposing the Traditional Plan in St. Louis expressed a determination to leave. Many had spoken throughout the week about the church as their home or as their family.

“Centrist and progressives never wanted a divorce. We never were looking for a gracious exit. We were looking for a little more space,” said the Rev. Adam Hamilton, a prominent pastor and delegate from the Great Plains Conference who had advocated the One Church Plan.

On Tuesday, Hamilton said from the floor that those who had voted for the Traditional Plan had not just alienated progressive United Methodists, but also those in the middle. They’d also inspired a number of people who hadn’t been engaged in the debate, but now were hurt, angry — and energized.

Afterward, he tweeted that his Kansas church was looking into holding a meeting with bishops and other key leaders to discuss “where Methodism goes from here.” 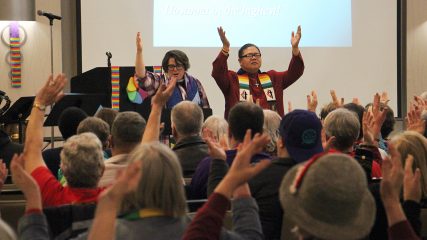 Pastors lead prayer during a service hosted by the Love Your Neighbor Coalition at the Holiday Inn in St. Louis on Feb. 27, 2019. The LGBTQ-affirming group hosted the service the morning after the special session of the UMC General Conference closed. RNS photo by Emily McFarlan Miller

But many of the speakers Wednesday said they knew where they were going.

“I ain’t going nowhere,” said Adama Hathaway-Brown, a certified candidate for ministry in the New England Conference, who identified as a “same-gender-loving woman.”

“There are just too many people to serve and I’ve come way too far to leave them now.”

In her conference, she said, there are people to feed at the soup kitchen; veterans and senior citizens to reach; and a number of people wanting to worship in a community that welcomes and affirms LGBTQ people. They were there before the General Conference, she said, and they are still there after the meeting.

There also is a generation coming up that needs to see them be the light in a dark world, added Dan Levine, a ministry candidate in the New York Conference, who identified as transgender. Levine came out after seeing the example of so many at the 2016 General Conference, he said, and he wants to do the same for others.

And that’s not unique to the church in the U.S., said the Rev. Kennedy Thomas Mwita of the Kenya-Ethiopia Annual Conference. While African United Methodists have been characterized as unanimously supportive of the Traditional Plan, he told the group he supported them as an ally.

“You have brothers and sisters in Africa who need this kind of hope,” Mwita said. 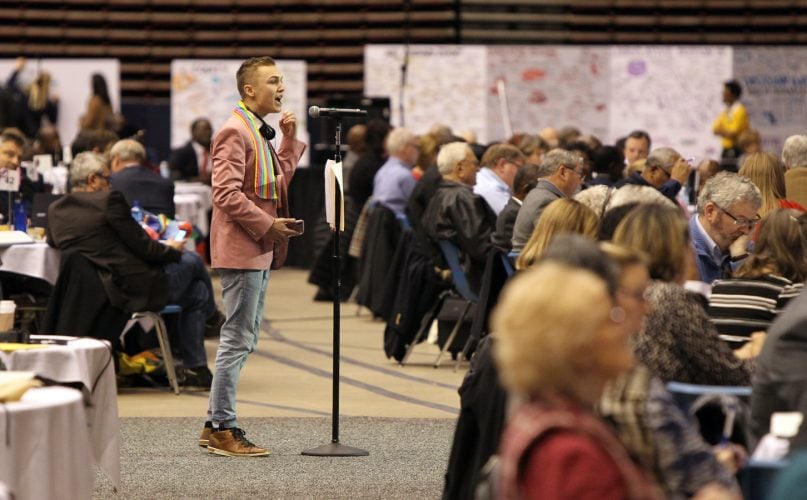 J.J. Warren, a delegate from the Upper New York Conference, said he wasn’t sure just the day before if the church was going to be his home.

Earlier in the week, Warren’s speech on the conference floor about his experience as a gay student reaching out to others at his college with a message of God’s love had drawn cheers and applause from observers and tons of shares on social media. With it came messages asking how he felt after the Traditional Plan vote and what he was going to do.

But joining a room full of LGBTQ-affirming and welcoming United Methodists gathered together as a church showed him he was home, he said. It showed him what the church was.

“We are the church,” Warren said. “The General Conference is not the church.”