(RNS) — While many Americans perceive Veterans Day as just another holiday that features special sales at countless shopping malls, that is not my view of November 11th. It has always been a solemn season of remembrance.

Last week my wife, Marcia, and my nephew Andrew Rudin visited Arlington National Cemetery, where my father and mother are buried. We were there to visit my parents’ grave and to recite the traditional kaddish, the Jewish prayer that is said in memory of a deceased loved one.

Interestingly, the short prayer is mostly in Aramaic, a sister language of Hebrew, and although mourners have chanted it for many centuries, the kaddish contains no reference to death. Rather, it is a strong affirmation of both God’s grandeur and the sacredness of life.

After the kaddish, each of us placed a small stone atop the military grave that contains my father’s name, Philip Gordon Rudin, his rank of U.S. Army lieutenant colonel, and the dates of his birth and death. On the reverse side of the grave are the name of my mother, Beatrice, and the dates of her life.

Sadly, because of our nation’s many wars and armed conflicts, burial space for veterans and their family members at Arlington is limited and precious. Because my father died in March 1988, 16 months before my mother, his casket lies 12 feet below the ground and hers rests six feet higher.

It is a long-standing Jewish custom to leave stones on a grave rather than flowers. While flowers are a beautiful gift to the living, they are like the human body that blossoms and ultimately fades. But it is believed the soul, similar to a stone, lives on forever. 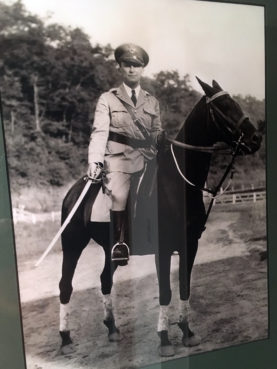 Like millions of other Americans, I was raised as an Army kid. My father, a graduate of the University of Pittsburgh dental school, lived up to his first name, which derives from “a lover of horses” in Greek.

Philip loved and owned horses, and in 1932 he joined the U.S. Army Reserves as a cavalry officer. Each summer for the next nine years he closed his Pittsburgh dental office for two weeks in order to fulfill his military duties at the Carlisle Barracks Medical Field Service Hospital near Harrisburg, Pennsylvania.

Carlisle also housed a cavalry unit in those years. The American military still rode horses in the 1930s, and my dad had a “twofer” at Carlisle: he was an Army dentist and he also rode horses. Years later, he liked to tell my brother, Bert, and me that he volunteered for military service in the 1930s as a direct response to the rise of Adolf Hitler in Germany.

“What else could an American Jew do in the face of Nazism?” he would say.

Maybe so, but I will always believe the opportunity to wear a dapper officer’s uniform, a Sam Browne belt pulled across his right shoulder and chest and attached to a saber, was of equal importance. The belt, made famous by General John J. Pershing in World War I, went out of fashion in 1940, when the U.S. Army abandoned the saber. But I still treasure a 1930s photo of my father in complete military garb sitting atop a large steed wearing his large belt and long saber.

His reserve unit was called up in the summer of 1941 shortly before the Japanese attack on Pearl Harbor that forced America into World War II. He served on active duty for the next six years, and during most of that time, my father was stationed at Fort Belvoir, near Alexandria, Virginia. He officially retired from military service in 1958.

During the 1950s, Bert also entered the Army Dental Corps and was stationed at Fort Bragg, North Carolina, the home base of the famed 82nd Airborne Division. In 1960, when I joined the U.S. Air Force chaplaincy, I was, in fact, following my father and brother into uniform — a kind of family tradition. The only difference was that I wore Air Force blue rather than Army khaki.

Arlington National Cemetery in Virginia has a long and complex history. On the eve of the Civil War in 1861, Robert E. Lee, whose large family mansion still stands atop a hill directly across the Potomac River from Washington, D.C., owned the 1,100 acre area. During the war the United States government gained possession of Lee’s vast property and, perhaps as an act of wartime anger and spite, in 1864 began to bury Union soldiers on the general’s property.

Today the cemetery attracts hundreds of thousands of visitors each year who come to see the revered Tomb of the Unknowns, the eternal flame that guards the grave of President John F. Kennedy and his family, along with visits to the Lee Mansion and the many displays that are inextricably linked to America’s history.

But that is not all there is to Arlington National Cemetery.

Once a visitor obtains a pass to view the gravesite of a family member and walks or drives into the huge cemetery, a silence immediately grips them. The quiet is overwhelming, interrupted only by the sound of departing jet airliners from nearby Reagan National Airport.

Last week the three Rudins slowly drove along Eisenhower and Bradley Avenues until we reached Section 65, where my parents lie together eternally atop a small hill overlooking the Pentagon.

A visitor suddenly recognizes the enormous price in military dead America has paid, and continues to pay, for our freedom. It is a sobering experience, far from the crowds of tourists and their mobile cameras and certainly far, far from Veterans Day shoppers seeking bargain sales. The historian Bruce Catton wrote about “The Stillness at Appomattox” following Lee’s surrender in April 1865 to General Ulysses S. Grant.

There is also a profoundly moving “Stillness at Arlington.”