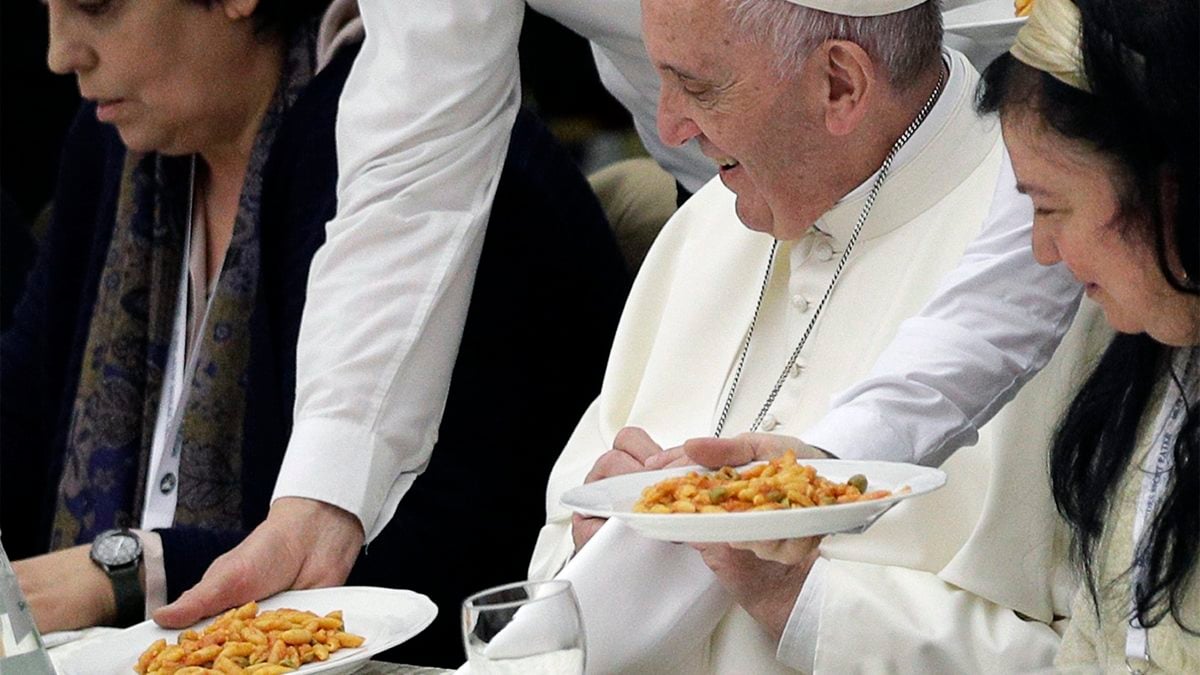 Pope Francis, left, watches the unveiling of Timothy P. Schmalz's new sculpture, 'Angels Unawares', on the theme of refugees and migration, in St. Peter's Square, at the Vatican, on Sept. 29, 2019. (Vincenzo Pinto/Pool Photo via AP)

VATICAN CITY (RNS) — To get an idea of what Pope Francis’ pontificate is all about, one need only drop by Saint Peter’s square this week.

Within the embrace of the world-famous colonnade lies a 12-foot-tall bronze statue of immigrants of all genders, races and cultural backgrounds and a medical facility for the needy that Pope Francis inaugurated during the week leading up to the third annual World Day of the Poor (Nov. 17).

“The marginalization painfully experienced by millions of persons cannot go on for long. Their cry is growing louder and embraces the entire earth,” Francis wrote in his message for World Day of the Poor, which was created by the pope in 2016 at the end of the Jubilee of Mercy.

“The option for those who are least, those whom society discards is a priority that Christ’s followers are called to pursue, so as not to impugn the Church’s credibility and to give real hope to many of our vulnerable brothers and sisters,” he said.

St. Peter’s Square these days is a snapshot of Francis’ agenda of a “poor Church for the poor,” as homeless and impoverished people find medical help and a welcoming and warm respite in the cold weather leading up to the holidays.

“Disadvantaged people, who are anxious at coming in at first, feel welcomed once they come inside,” said Roberta Capparella, a volunteer from the Red Cross who coordinates the doctors and nurses offering their time in support of the papal initiative.

This is the third year that Capparella has been volunteering at the medical facility in the middle of one of Rome’s most visited landmarks. With her short haircut and standard blue vest, Capparella exudes an air of practicality, which she displays in the quick way she offers council here, corrects something there and makes sure things function overall.

“There is always more to learn, because every year there are things that can be improved,” she told Religion News Service (Nov.12) in the brief moments she could spare.

This year the medical facility is offering even more services than in previous years. People coming in can take advantage of cardiology, vision, dermatology, rheumatology, gynecology, virology, diabetology, echography and pedology check-ups — all for free.

There are between 100 and 150 people coming into the clinic every day, and word is spreading around town of the pope’s gift to the city’s poor, Capparella said. Each person, she said, usually takes advantage of four or five of the services the facility offers, including vaccinations. 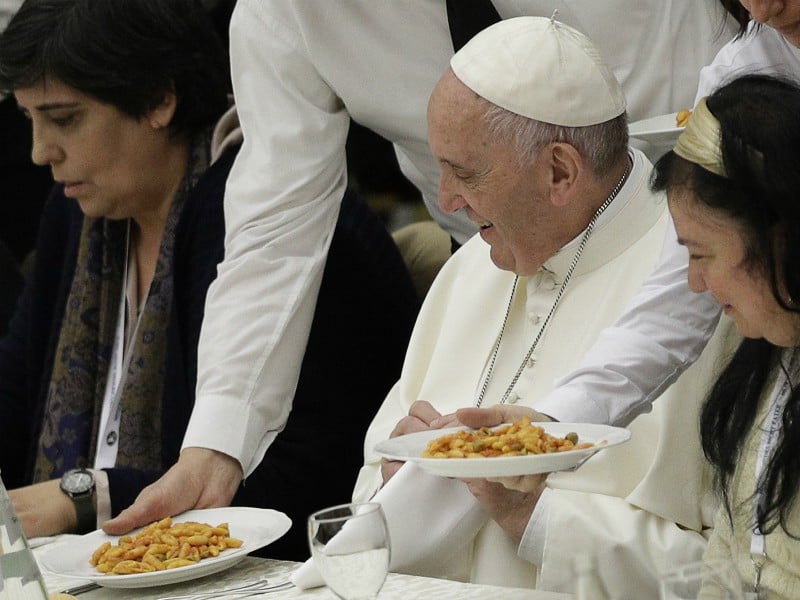 Pope Francis is served gnocchi during a lunch at the Vatican, Sunday, Nov. 19, 2017. Pope Francis offered several hundred poor people, including homeless, migrants, and unemployed, a lunch of gnocchi, veal and tiramisu on Sunday as he celebrated World Day of the Poor with a concrete gesture of charity in the spirit of his namesake, St. Francis of Assisi. (AP Photo/Andrew Medichini)

The people who come in have different backgrounds, she explained, from homeless people to those who are struggling financially or hail from other countries and can’t afford Italy’s mixed private and public healthcare system.

“The pope gave us the opportunity to prescribe medicines here,” Capparella explained, “which can be very expensive.”

Doctors volunteering at the facility give prescriptions that are then brought to the Vatican pharmacy, which delivers the medication for pickup the day after. At any given time, there are between three and four doctors working at the facility and about 20 nurses.

“We have chief physicians who come to offer their service like everybody else. That is the beauty of this place,” Capparella said. “When we are here, we are all here for a purpose, which is to help the largest number of people possible.”

The facility is a flurry of excitement, with people coming in and nurses running from one task to another. For first-time volunteer Alessandra Legnani, “it’s a beautiful experience” that she looks forward to repeating next year.

“Certainly, the poor come to us also because we give them food, but what they really need is more than our offer of a warm meal or a sandwich,” Pope Francis wrote in his speech, setting the tone for World Day of the Poor.

“The poor need our hands, to be lifted up; our hearts, to feel anew the warmth of affection; our presence, to overcome loneliness," he wrote. "In a word, they need love."

Legnani described the joy of people walking inside the facility, who “feel welcomed and cuddled.” A coffee station near the entrance offers a heated space to retire from the tireless November rainfalls and a chance to chat.

“I think they feel like they are part of something,” she said. “Sometimes they ask for more visits because they like being here and not feeling like numbers, but people.”

In his message, the pope emphasized that “the poor are not statistics to cite when boasting of our works and projects,” but persons “to be encountered.”

The past two years, Pope Francis has paid surprise visits to the medical facility in St. Peter’s Square, and the hope among patients and volunteers is that he might drop by again this year.

“The expectation of seeing him and being with him up close is very exciting,” Legnani said, and Capparella told RNS she had “goosebumps” watching the pope interact, chat and take selfies with the patients in previous years.

The increasingly popular hospital will be closed on Nov. 17, when Francis will celebrate a mass in Saint Peter’s Basilica before hosting a luncheon at the Vatican for over 1,500 poor people from Italy and Europe.

“We can build any number of walls and close our doors in the vain effort to feel secure in our wealth, at the expense of those left outside. It will not be that way forever,” the pope said. “A change of mentality is needed, in order to rediscover what is essential and to give substance and verve to the preaching of the kingdom of God.”