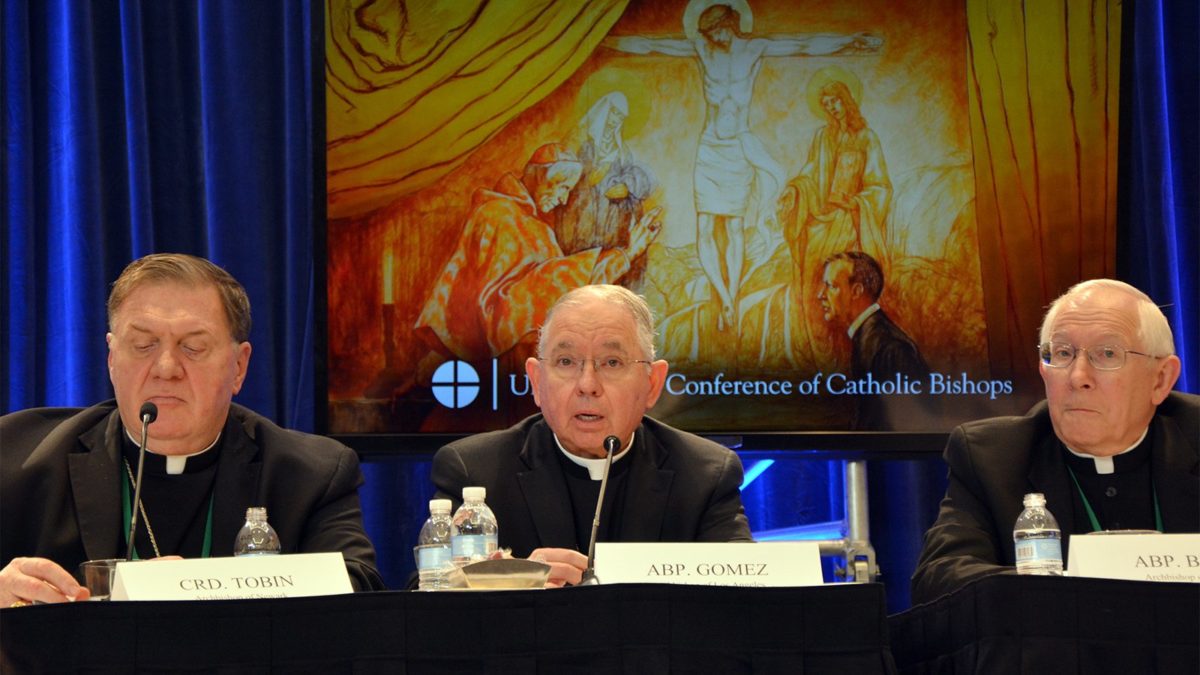 BALTIMORE (RNS) — The U.S. Conference of Catholic Bishops has elected as its new president Archbishop José Gomez of Los Angeles, California, a naturalized U.S. citizen who emigrated from Mexico and is outspoken on immigration issues.

Gomez, 67, was elected on Tuesday (Nov. 12) by a landslide on the first ballot during the bishops fall conference in Baltimore. The first Latino selected to hold the position, he received 176 votes, with some American bishops voting remotely from Rome. His closest competitor in the field of 10 candidates received 18 votes.

When the results were announced, the room erupted in a standing ovation.

Gomez has been vice president of the USCCB under outgoing President Cardinal Daniel DiNardo of Texas for the past three years.

Speaking at his first press conference as USCCB president-elect later in the day, Gomez said that immigration has been a frequent point of discussion by bishops in the past.

“We are constantly talking about immigration, and especially encouraging our elected officials to do something," he said, "to come up with immigration reform that is reasonable and possible.”

“We have so many people that are our brothers and sisters in the United States that have an immigration situation,” he said. “Then we have the situation at the border, that is a tragedy.”

Asked about the Supreme Court’s review of the Deferred Action for Childhood Arrivals program, Gomez urged justices to protect immigrants who came to the country as children, or “Dreamers.”

Some Catholics noted the additional symbolism of electing an immigrant to head the USCCB, especially on the same day the U.S. Supreme Court hears arguments in a case contesting the Donald Trump administration’s plan to end the DACA program, which offers legal status to near 700,000 undocumented immigrants brought to the U.S. as children.

“The USCCB has taken an important step to recognize the centrality of the Latinx community to the U.S. Catholic Church,” Natalia Imperatori, a Catholic theologian and professor of religious studies at Manhattan College, told Religion News Service. “As an immigrant himself, I hope the new president will urge the conference to stand boldly, prophetically, and unambiguously alongside the immigrant community, a crucified people in our country.”

Imperatori's remarks were echoed by Cardinal Joseph Tobin, archbishop of Newark, New Jersey, who participated in a sizable protest against the U.S. government's detention of immigrant children and families in September.

“I hope the symbolism is not missed by anybody that bishop Gomez is an immigrant who has served this country well and might change, I hope, a few caricatures,” he told RNS, noting that Gomez’s archdiocese is also the largest in the country.

Gomez, who has headed the L.A. diocese since 2011, was born in Monterrey, Mexico, and is known as a vocal supporter of immigrant rights; he participated in a fact-finding mission to detention centers for immigrant families along the U.S.-Mexico border in 2018.

“It is possible to address the needs of immigration reform,” Gomez said at the conclusion of the border visit. “We just need to make the decision that we can do it.”

He also published a book on immigration in 2013, entitled “Immigration and the Next America: Renewing the Soul of Our Nation,” and oversaw a “Mass in Recognition of All Immigrants” in California in September.

“For many years now, I’ve been saying that immigration is not just a political issue, it is a spiritual issue,” Gomez said at the mass. “Immigration is not only about borders between nations, it’s about overcoming barriers in the human heart … and accepting others.”

Archbishop Allen Vigneron, archbishop of Detroit, was also elected vice president of the USCCB on Tuesday after several rounds of voting. Both he and Gomez will officially claim their posts when the bishops adjourn their meeting on Wednesday (Nov 13).

September 21, 2020
Related Posts
By Simran Jeet Singh
How corrosive politics make us all less safe
By D.L. Mayfield
How a Sean Feucht worship service convinced me I am no longer an evangelical
By Emily McFarlan Miller
Priest supports whistleblower allegations at ICE facility as Christian leaders weigh in
By Jack Jenkins
ICE apprehension on church grounds violated federal policy, say faith leaders
By Emily Reimer-Barry
Winning the hearts and minds of Catholics in a church divided