(RNS) — A group of prominent Catholic bishops concluded a two-day fact-finding visit to the U.S.-Mexico border on Monday (July 2), capping an emotional trip that included ministering to migrant children at a detention center who are separated from their parents.

But Cardinal Daniel DiNardo, archbishop of Galveston-Houston and president of the U.S. Conference of Catholic Bishops, said his group came away energized to push elected officials for immigration reform and alternatives to detaining families at the border.

Specifically, he suggested the administration replace family detention with “family case management” that includes cooperation from Catholic Charities and other groups. 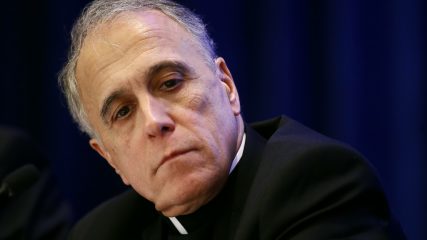 Cardinal Daniel DiNardo of the Archdiocese of Galveston-Houston, president of the U.S. Conference of Catholic Bishops, speaks at a news conference Nov. 13, 2017, in Baltimore during the USCCB’s annual fall meeting. (AP Photo/Patrick Semansky)

“We have to petition Congress,” DiNardo said Monday evening during a news conference at the Basilica of Our Lady of San Juan del Valle in San Juan, Texas. “We have to talk to them, and we need to make it really intense — not nasty, but really intense.”

Intensity was not present at the border, which they framed not as a protest but as a “pastoral” mission. The bishops, who reportedly asked immigration reform activists not to bring protest signs, remained critical of the policies that brought them there but were careful to say there were “no villains” involved, including U.S. Border Patrol agents.

It was a stark contrast from the bishops’ spring meeting in Florida in June, when the USCCB and several member bishops spoke out forcefully against the Trump administration’s “zero tolerance” detention policy and the idea of a delegation to the border was first suggested by Cardinal Joseph Tobin of Newark, N.J.

In Florida, Tobin said such a trip would offer a “sign of our pastoral concern and protest against the hardening of the American heart.” Another bishop suggested invoking “canonical penalties” against Catholics who helped implement the policies, leaving open the possibility of sanctioning border agents.

Instead, DiNardo and five other bishops, including the USCCB’s vice president, Archbishop José H. Gomez of Los Angeles, kicked off their visit with Mass on Sunday evening at the San Juan basilica, a famous pilgrimage site for immigrants.

Accompanying DiNardo and Gomez on the trip were Bishop Joseph C. Bambera of the Diocese of Scranton, Pa., and Bishop Robert J. Brennan, auxiliary bishop of the Diocese of Rockville Centre, on Long Island. They were joined by bishops from the local Diocese of Brownsville, Daniel E. Flores and his auxiliary, Mario Alberto Avilés.

They went on to visit Catholic Charities’ Humanitarian Respite Center in McAllen, Texas, which provides meals and shelter to immigrants after they are processed by the government; a nearby detention center constructed in a former Walmart Supercenter; and a U.S. Customs and Border Protection processing center.

The respite center was launched in 2014 in response to the surge of primarily Central American immigrants who were crossing the border to escape widespread violence in their home countries. The director of Catholic Charities of the Rio Grande Valley, Sister Norma Pimentel, has since received accolades from the University of Notre Dame and Pope Francis himself for her efforts.

The bishops said the vibe at the respite center, which was housed within a nearby church until 2017, was almost heartening.

“There was a sense of relief, and I picked up a sense of hope,” said Brennan. He added that when he spoke to people there about their future, “people really seemed to light up.”

The clerics said their visit to the detention center, where they held Mass for more than 200 boys who either crossed the border alone or were separated from their families by the U.S. government, was very different.

“There was a sense of real seriousness, a stoic, somber kind of look,” Brennan said. “It was very clear that they were well cared for, that the people who were working with them treated them well. But also, you are looking at children without their families.”

DiNardo was careful not to demonize border agents, and he praised President Trump’s recent decision to sign an executive order that calls for ending the separation of families along the border. But the bishop also bemoaned the alternative — detaining families together — and offered a possible solution.

“We have some concerns about family detention,” he said. “In the past there was an alternative to detention — family case management programs.”

The Family Case Management Program was developed in January 2016 as a way for families who cross the border to be closely supervised by social workers while they wait for their cases to be decided. Immigrants received help with housing, health care, school for their children and legal assistance to navigate the immigration court system. Family case management is touted as significantly cheaper than family detention, as well as more humane.

As of April 2017, the program was caring for 630 families in Chicago, Miami, New York, Los Angeles and the Baltimore-Washington, D.C. area, according to The Associated Press.

But the Trump administration abruptly shuttered the program that same year while seeking a $1.6 billion increase to expand detention and removals.

Ashley Feasley, director of policy at the USCCB’s Migration and Refugee Services office, said reinstating the program — which she noted had a 99 percent compliance rate — could help all parties in the long run.

“The first focus is reunifying the families,” Feasley, who served on an advisory board for the program, said. “But when we think longer-term about how to deal with the families that are coming, how to make sure they are complying with immigration proceedings … (this) could provide a reasonable way forward.”

At the border, the bishops said that changing how the United States deals with immigrants is both necessary and feasible.

“It is possible to address the needs of immigration reform. We just need to make the decision that we can do it,” Gomez said.