WASHINGTON (RNS) —  Leith Anderson is a fan of the word “evangelical” and the Christians who claim that name.

But he knows the term may have outlived its usefulness in a polarized country where evangelical has often become a synonym for conservative Republican.

“I like the word ‘evangelical.’ I would like it to stand for what I think it has always stood for,” the retiring president of the National Association of Evangelicals said in a recent (Nov. 19) interview. “But if people want to abandon the term, let them abandon the term. That’s really not what matters. What really matters is their faith and their practice.”

Anderson, who has been NAE president since 2006, has worked to help people understand the diversity of what and who evangelicals are. He’s done so in the face of public polls showing that “white evangelicals” are among the most ardent supporters of President Donald Trump and his policies.

The longtime pastor wants evangelicals to be defined by their faith — not their politics.

“I want the standard to be what the Bible teaches, not what the polls report,” he said. But Anderson, whom Fea called a “quiet spokesman” with a pastoral heart, has been overshadowed by fellow evangelicals Franklin Graham and Jerry Falwell Jr.  Those two are often seen as public faces of evangelicals and more likely to be quoted in the media.

“It’s a very awkward place,” said Fea, author of “Believe Me: The Evangelical Road to Donald Trump.” “It doesn’t fit well in talk radio or the talking heads screaming at each other on cable news.”

Under Anderson’s leadership, NAE worked with LifeWay Research to develop a statistical understanding of the diversity among U.S. evangelicals and found that 44% of African Americans, 30% of Hispanic Americans and 29% of whites can be defined as evangelical.

“So the reality is, in absolute numbers there are a lot more white evangelicals, but in terms of if you meet somebody in the street, an African American Christian is much more likely to be an evangelical,” he said. Anderson is part of a long history — 75 years as of 2018 — in which the evangelical organization has sought to be a centrist voice between more liberal and more fundamentalist Protestants. The organization currently has 40 member denominations along with a wide array of member organizations, from Rick Warren’s Saddleback Church to the missions network Missio Nexus.

During his tenure as president, Anderson, 75, has continued to press for more diversity in the NAE, which has been a long-term concern for the organization. Billy Graham acknowledged the need for greater attention to racial justice in a 1960s speech at an annual NAE meeting, and three decades later then-NAE President Donald Argue said the membership was “too old, too male, and too white.”

Last month (October), with Anderson’s encouragement, the NAE board transformed the look of his organization’s future leadership. The Rev. Walter Kim, an Asian American theologian, will succeed Anderson as president on Jan. 1. John Jenkins, the African American leader of a Maryland megachurch, and former Wesleyan Church General Superintendent Jo Anne Lyon will start as chair and vice chair, respectively, on March 5.

Kim, an NAE board member since 2013, said Anderson has helped the organization determine what it can say jointly about issues such as immigration reform and creation care by “being able to figure out what is the central shared biblical concern and to focus in on that and to develop a consensus.”

That has not always been easy. Leith Anderson, center, bows in prayer during an event with The Alliance. Photo courtesy of NAE

As president, Anderson defended Richard Cizik when a group of non-NAE members urged the board to ask Cizik, who was NAE’s vice president of governmental affairs at the time, to tone down his environmental activism or resign.

Eventually, Cizik lost his job after stating his support for civil unions in an NPR interview.

Cizik told Religion News Service that he considers Anderson someone who would take a few steps back from any line that might cause difficulty if the NAE crossed it.

“He was averse personally, and I think professionally, to controversy,” said Cizik, who worked at NAE for 28 years. “And in my case, Richard represented controversy and controversy represents a threat to survival.”

Cizik, along with Fea, said he wished that Anderson, as NAE’s leader, would speak out about other matters, including “Trump’s violations of biblical morality” such as telling untruths.

Anderson did acknowledge that the NAE lost a few denominational members when it took its stance on immigration.

Jenkins, the incoming chair, said the NAE’s immigration position is probably “a lot more compassionate” than Trump’s policies. But, he added, the organization has never been one to fight politicians.

“I don’t think they’ve ever been hostile or against political leaders,” said Jenkins, an NAE board member since 2008. “They try to influence them, is what they try to do or what we try to do, as opposed to fighting them or making ourselves their enemy.”

Anderson has been willing to collaborate with those who share common causes with the NAE. That includes serving on then-President Barack Obama’s advisory council on faith-based programs.

“The primary emphasis of that advisory council was human trafficking,” Anderson said of the group that included representatives of Jewish and Mormon faiths as well as the predominantly gay Metropolitan Community Churches. “We all care about stopping human trafficking.” 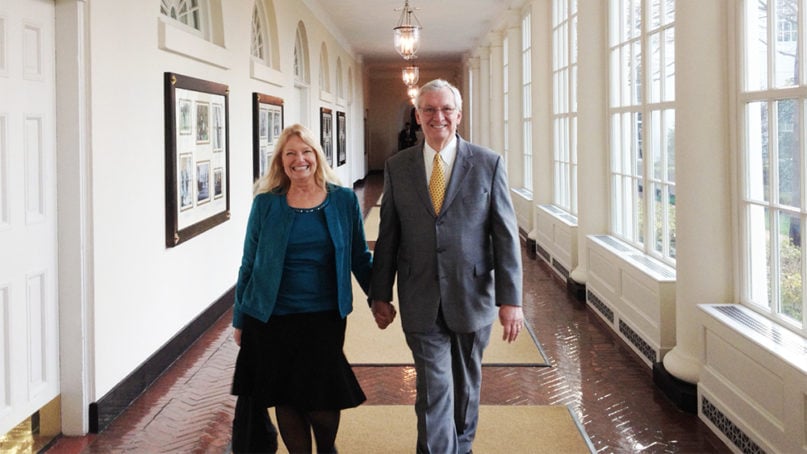 Leith and Charleen Anderson at the White House in April 2013. Photo courtesy of NAE

Joshua DuBois, executive director of the White House Office of Faith-based and Neighborhood Partnerships when Anderson served as a presidential adviser, recalled how the evangelical leader also worked with the administration to address issues such as immigration reform.

Anderson appeared as a front-row personal guest when Obama addressed the topic at a 2010 speech at American University.

“That was just a major show of support,” recalled DuBois, now CEO of a consulting firm and a market research firm. “No one would ever say that Leith compromised his faith and his pastoral and organizational leadership to work with us — he certainly did not — but he was willing to show up and be there in support of a Democratic president on an issue that impacts a lot of people.”

Shirley Hoogstra, president of the Council for Christian Colleges and Universities, said she’s appreciated Anderson’s inclusive approach within his own organization.

“He’s created that big tent by giving a voice and representation that is marked by civility, honesty and respect,” she said. “For instance, he has been particularly conscious of making sure that not only are churches represented but organizations are represented and persons of color and women and men.” 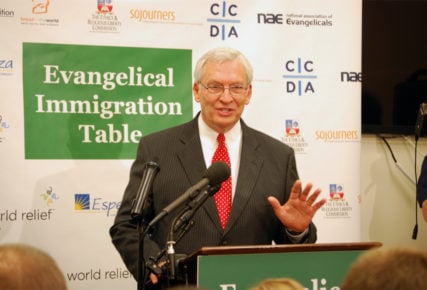 Leith Anderson speaks at an event for the Evangelical Immigration Table in Dec. 2018. Photo courtesy of NAE

Anderson’s aversion to taking sides on political issues dates back to his time as pastor of the 5,000-member Wooddale Church outside Minneapolis. He led that congregation for 35 years before retiring in 2011. Some of his time in the pastorate overlapped with his work as NAE president.

“I don’t recall Leith ever directly addressing political or policy issues from the pulpit,” former Minnesota Gov. Tim Pawlenty said in an email message. “My sense is he viewed his role in that regard as staying focused on teaching scripture.”

As pastor of Wooddale, a church affiliated with the Conservative Congregational Christian Conference, Anderson helped start nine other churches of various denominations. He and his wife, Charleen, now attend one of those churches, which was founded in 2003 after the couple bought a cabin in north central Minnesota and met their next-door neighbors.

“We started a Bible study on Memorial Day weekend and another couple was invited — there were six of us,” Anderson said of Timberwood Church. “By Labor Day weekend there were 127 in the Bible study. We continued through the school year, changed it into a church at Easter, and now they have a thousand people every weekend in a town of 1900.”

As he looks toward retirement, he’ll be leaving behind his practice of bringing NAE board meetings to order by reciting a Shakespearean soliloquy or a portion of the Gettysburg Address. He plans to lecture and continue serving on boards of evangelical groups such as the relief organization World Vision and the mentoring ministry Navigators.

“I’m pleased with the best of strong evangelicalism in America and around the world,” he said, pointing to the example of evangelical medical doctors who stayed put when Ebola was discovered in West Africa. “I don’t claim to have done that but I take delight in that. And I guess if I have a regret, it’s that evangelicalism is too often not known for that, but too often known for political and other identifications.”