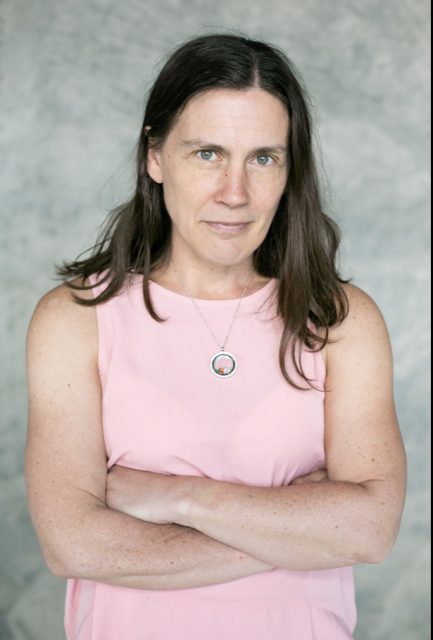 I had been wearing mourning black with a rainbow ribbon after the November 2015 policy against same-sex married members and their children. I’d also been teaching the 3-year-old Sunbeams in Sunday school every week and I loved that calling.

It had become increasingly difficult, however, to be myself at church. I found myself changing the words to Primary songs, singing “Heavenly Mother, are you really there?” and “I am a child of God and they have sent me here.” But I couldn’t always find ways to sing my truth.

After a particular Relief Society meeting where I’d been asked to speak about tithing and declared that I couldn’t pay it anymore after the BYU Honor Code scandal, I got the strong feeling that I was considered a dangerous member of the ward. I’d already given up visiting teaching, which I truly loved, because I couldn’t give the prescribed lessons against same-sex marriage and couldn’t even sit still while my companion gave them.

All that said, I still love Mormonism. I continue to write “The Bishop’s Wife” mystery series for a national press, Soho, and books for By Common Consent Press, including “The Book of Laman,” “The Book of Abish,” “The Woman’s Book of Mormon” and “Vampires in the Temple.”

I attend wards with family members and friends outside of Utah, because it doesn’t hurt as much when it’s not my ward and my friends saying those things about the supposed dangers of the LGBT+ “agenda.” On my podcast, “The Mormon Sabbatical,” I talk sometimes about the reality that if I were in any of the wards I’ve attended outside of Utah, I would likely still be attending. I’d feel like there was a space for me.

That makes it sound as if my ward is at fault for my stepping away, and that’s probably not fair. My ward was simply falling in line behind the leadership of the church under President Russell M. Nelson. As much as it may look like he is constantly making good changes, I have a fundamental problem with his refusal to consider his own mistakes regarding the 2015 November policy, which he has insisted was “revelation,” despite walking back parts of it only three years later.

Nelson has a pattern, too, of excommunicating reformers like Kate Kelly, John Dehlin and Sam Young, and then taking credit for the very suggestions that those reformers asked for (often in slightly watered-down form). I see a growing problem of leadership worship and insistence that God speaks directly from the mouth of the prophet.

It’s difficult to untangle yourself from Mormonism. I created a set of deadlines for taking off garments and buying my own underwear, and for telling the Primary Presidency I wasn’t going to return this year. But there were things I didn’t anticipate, like the bishop asking the executive secretary to invite me in for an interview. I tried to decline with a simple “no,” but that wasn’t sufficient, and I had to give a longer explanation.

There are a host of social problems I didn’t realize would be connected to the church. Recently I discovered that a friend who had asked me to lunch had been assigned as my ministering sister, despite my request to be taken off the list of those rolls. I was hurt by this in ways I’m not sure I can explain to her, though she has asked. It feels like I’m seeing for the first time that all of my friendships with other church members were administered by people above me somehow and that without the church between us, there is nothing left of those relationships.

It’s not just my still-active Mormon friends — I’m wary too. I don’t want to hear them enthuse over the latest General Conference talk, or a child’s mission call, or the framework of miracles that is deeply hurtful to a woman who was not given a miracle to save her child.

On their side, I suspect that the radio silence is partly fear and partly just busyness — if I’m not at church or in a calling with them, not on their list of ministering sisters, they don’t think about me at all.

I plan to experiment with some other churches next year, though I admit I’m not optimistic. I suspect my complaints about Mormonism (sexism, lack of transparency, insistence that mythic stories are literal, requests for funds, claims of authority) are true for almost all organized religions.

Maybe I am, as my adult children have begun to tease me, a Buddhist monk. Meditation is my most meaningful way of connecting to the divine. Through meditation I try to spend less time judging the world and the people in it and more time observing and struggling to understand them — and myself.

I think it’s likely at this point that my sabbatical will simply become permanent, a new way to interact with Mormonism and Mormons, with less attachment and less pain, and with more focus on reaching out to those who are struggling on the margins. If there’s one thing that I’ve learned from all of this, it’s that when I sit with a trans Mormon friend who is suicidal after hearing Dallin H. Oaks’ corrosive talk on biological gender, I feel God more than I learned from any church leader ever.

I’ve had some profoundly spiritual experiences this year as I’ve changed my prayer to twice-daily meditation, looked for ways to become less reactive, and learned to welcome myself and my emotions to the table instead of suppressing them in an attempt to become the Mormon view of a perfect woman. I’m not looking for ways to “serve” my fellow ward members anymore, not trying to “make myself better,” but I’m trying to see reality more clearly.

Meantime, I’ve had some beautiful, sacred experiences with some new ex-Mormon friends who have been honest enough to share their real selves with me and to let me mourn with them. I gave up the temple as a space of beauty and connection, but sometimes I allow myself to close my eyes in the midst of a busy street and listen to the sounds around me — cars, busy people passing. I feel God with me, promising me that She/He/They have always been there, the living water my thirsty self stopped finding in Mormon spaces.

What Mormonism taught me

Being excluded from a Mormon temple wedding