CAIRO (RNS) — In the early hours of Nov. 23, seven plainclothes police officers arrived at the home of Ramy Kamel, a 33-year-old tailor and civil rights advocate for the Coptic community in Egypt.

Egyptian and international human rights groups say the security officers beat Kamel and proceeded to interrogate him without his lawyer present.

The following day, the Coptic activist known for advocating for Egypt’s urban poor and rural peasants was charged with joining and financing a terrorist group and disrupting public peace.

According to the Cairo Institute for Human Rights Studies, a nonprofit that monitors the compliance of international human rights law throughout the Arab region, the Supreme State Security Prosecution in Cairo’s Fifth Settlement neighborhood also charged Kamel with inciting public opinion against the state and using social media to exacerbate tensions between Muslims and Christians.

The Coptic community, thought to number at least 15 million in a nation of 110 million, is outraged and worried.

“Ramy Kamel has been the voice of the weakest, most marginalized group in our society, especially in Upper Egypt,” said Makarios Lahzy, a Cairo-based attorney who called for Kamel’s immediate release at a U.N.-sponsored global minority rights conference in Geneva last week. Ramy Kamel, from left, an unidentified monk and Hanna Wassfi on Dec. 15, 2018, at St. Samuel the Confessor Monastery in the Desert of Minya Governorate, Egypt. Kamel was there to attend a Mass for the Martyrs’ Souls and their memory after two buses carrying Coptic Christians were ambushed on Nov. 2, 2017, as they left the monastery, killing seven of the pilgrims and wounding 19. Photo by Mina Nader / ARA Network Inc.

Lahzy fears Kamel’s arrest indicates that the government under President Abdel-Fattah el-Sissi will no longer tolerate any criticism of how Egypt treats the largest population of Christians in the Middle East. “His targeting is a blow to the Coptic human rights movement,” Lahzy said.

Meanwhile, other Coptic Christians are also known defendants facing charges in the case.

Over the past month alone, 42-year-old union organizer Khalil Rizk was accused of “joining a terrorist group,” after publishing pay hike demands by workers at a government-controlled pharmaceutical company. Also, police detained 25-year-old automotive repairman Fady Samir during what are now routine stop-and-frisk operations to check social media accounts on the mobile phones of young people in downtown Cairo.

Last week, Amnesty International published a report that documented the ways the SSSP is “routinely misusing counter-terror legislation to prosecute thousands of peaceful critics and suspend guarantees to a fair trial.”

Kamel is the most visible of the imprisoned Christian activists because of his wide-ranging advocacy.

“Kamel’s arrest is a message of intimidation to silence the few remaining voices,” said Ishak Ibrahim, a minority affairs researcher at the Egyptian Initiative for Personal Rights, a group that monitors attacks and discrimination against the Coptic Christian community. “He did not create the problems he wrote about.”

Kamel’s work includes campaigns for the preservation of Coptic monasteries, protection of poor neighborhoods threatened by government-directed construction projects, and opposition to this year’s referendum on Egypt’s constitution that enabled el-Sissi to remain in office until 2030.

“After the Jan. 25 revolution, Kamel was hoping, like a majority of young people, that the slogans of the revolution would turn into a reality,” said Ibrahim. “But the sectarian violence targeting Copts came soon after — from the demolition of the Atfih church to the clashes in the (poor Cairo neighborhoods) of Manshiyet Nasser and Imbaba to the 2011 Maspero massacre (where 24 people died).”

Kamel led the Maspero Youth Union, a group formed in the wake of the burning of another Coptic church in Upper Egypt. In October 2011, about 10,000 Copts and their Muslim allies staged peaceful protests outside the main state television building in downtown Cairo. The demonstrations were halted by the Supreme Council of the Armed Forces and resulted in 24 deaths and 212 injured.

The massacre occurred in the interim period between the overthrow of former President Hosni Mubarak and the 2012 election of Mohammed Morsi, a leader of Egypt’s Muslim Brotherhood. At the time, el-Sissi was serving as head of military intelligence and was a member of the 22-man SCAF.

Kamel continued to point to the regime’s shortcomings, even as el-Sissi consolidated power. The president moved to build a constituency of support among Christians by easing some church building restrictions and allowing them to make a pilgrimage to Jerusalem just as Muslims take time off to make the hajj to Mecca.

El-Sissi has even been seen as a protector of the community in some circles. 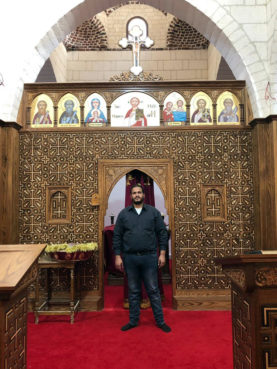 In April, Kamel submitted a report documenting ongoing discrimination against Copts, delivering that dossier to a group of over 100 Egyptians and Egyptian Americans who met with members of Congress and U.S. State Department officials during an advocacy day sponsored by organizations including Human Rights Watch, a group that has frequently condemned Egypt’s criminal justice system and its security apparatus.

“The report systematically analyzed patterns of violations against Copts since the start of Sissi’s presidency,” explained Meriam Girgis, a 42-year-old New Jersey paralegal and advocacy day organizer. “It is difficult to support the narrative that the regime has protected Copts for the simple reason of its failure to uphold human rights standards, end discrimination and reform institutions that continue to perpetuate it.”

As an example of the ongoing risks faced by Christians in her homeland, Girgis points to mysterious fires in at least three Egyptian churches since Sept. 20, when Mohammed Ali, a self-exiled contractor who is not a Coptic Christian, called for protests against austerity measures imposed by the government and against increased military domination over the economy.

“It’s important to note that Ramy, along with many activists, members of Parliament and businessmen explicitly received requests to mobilize in the street for Sissi after Sept. 20,” Girgis explained. “He explicitly refused to demonstrate even as he hoped that protests wouldn’t harm the fragile stability of the country and put Copts and other minorities at risk.”

Until recently, most Copts feared a resurgence of Islamist power more than the autocratic tendencies of el-Sissi.

“But now people are fed up with Sissi’s draconian security and economic policies and the corruption in the military institutions,” Girgis added.

Even pro-government politicians have voiced alarm at Kamel’s arrest.

Emad Gad, a Coptic member of Parliament, fears the current crackdown on peaceful dissent is driving a wedge between his community and the el-Sissi administration.

“The arrest of Rami Kamel, a patriotic Egyptian and pure human rights advocate, is a shocking decision producing negative repercussions for the image of the Egyptian regime in the eyes of the Copts in Egypt, the diaspora and with international organizations,” said Gad, who credits the activist with resolving a property dispute between a mountaintop monastery in the Fayoum governorate and officials seeking to build a road on lands cultivated by local monks.

“We had regular dialogues, and now suddenly, he is arrested, the cards are mixed, and those who bet on reform from within the regime are in deep trouble,” he added. “This decision by security forces puts the regime in unnecessary trouble, and I am calling for the release of Ramy Kamel.”

London-based Christian Solidarity Worldwide and the United States Commission on International Religious Freedom have both expressed alarm over Kamel’s arrest and the renewed crackdown on activists and journalists in Egypt.

On Sunday, priests intoned prayers for Kamel in churches from Upper Egypt to metropolitan Cairo and Alexandria.

“We cannot sleep because we are so worried about Ramy’s fate and health,” said his 35-year-old sister, Hanan Kamel, as the congregation called for his release during the Mass at the Nile-side Blessed Virgin Mary and the Archangel Michael Church facing Cairo’s Warraq Island.

“My brother did nothing to (warrant) all this. He’s the most important person in our lives.”

Religion Hub
Fire at Cairo Coptic church kills 41, including 15 children
Follow us on Facebook!
Submit your photos to RNS