(RNS) — Dana Perry, a 42-year-old divorced mother of three, lives in the small North Carolina town of Wilson, where she is rearing her sons in the Christian faith.

Her boys, ages 18, 16 and 11, go to church alongside her on Sundays and attend youth group at another church on Wednesdays.

“It hasn’t changed anything about our faith or the way we live out our faith,” she said of her divorce three years ago.

A new study from the Pew Research Center that compares the size and composition of households among the world’s different faiths finds that Christian children, more than members of any other religious group, live in single-parent homes. And women, particularly Christian women, are more likely than men to live as single parents. That may not be intuitive, given that Jewish and Christian teachings value marriage and family.

The study acknowledges that religion is not the only cause at play here. Many factors affect household sizes, some perhaps more important than religion. Those might be cultural norms, income, education, access to good health care and retirement benefits.

“It’s interwoven and bidirectional and we can’t parse the main cause,” said Stephanie Kramer, a Pew researcher. “The causal arrows are going in so many directions.”

Yet the findings related to religion are nonetheless intriguing. The study finds that:

By region, people tend to form the smallest households in Europe (3.1) and North America (3.3). The biggest households are in sub-Saharan Africa (6.9) and the Middle East-North Africa (6.2). Latin America and the Caribbean (4.6) and the Asia-Pacific region (5.0) fall in the middle.

Yet, even among these regions, religion still seems to have an impact. 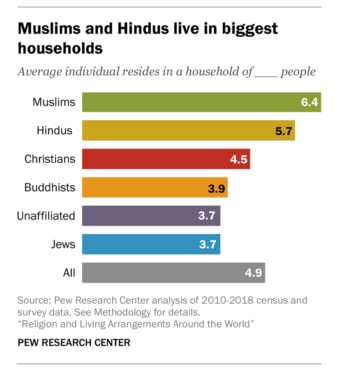 A good example is Nigeria. Africa’s most populous nation is almost evenly split between Christians living in the country’s south and Muslims living in the country’s north. But even in the same country, Nigerian Muslims have an average household of 8.7 people; Nigerian Christians just 5.9. (A similar pattern within a country is true for Senegal: Muslims there live in 14-person households on average, while Christians live in homes of about nine members.)

In the survey, Pew aggregated data from multiple demographic and health surveys, census data, General Social Surveys and European Social Surveys, as well as country-specific studies. The final dataset was based on 20 million responses representing the living arrangements of about 83 million people. All the data was from 2010 and on.

Theories abound for why Christians and Jews tend to live in small or single-parent families. Some have pointed out that people from Western, educated, industrialized, rich and democratic societies (sometimes known by the acronym WEIRD) may be unrepresentative of humans as a species and are outliers on many measures. Those families may have more family instability and single parenthood.

But Brad Wilcox, director of the National Marriage Project at the University of Virginia, said it may be that Christianity, in particular, lends itself to a more individualistic worldview.

“Part of the story here is that Christianity and perhaps Judaism have a deeper emphasis on the individual conscience,” said Wilcox. “That may express itself in more nuclear families and single-parent households.”

Why Jews, more than members of any other faith, live without children and relatives is another intriguing finding. But religion may not explain it.

The vast majority of the world’s Jews live in two countries: Israel and the U.S., both highly developed, affluent and educated. That more than anything may explain the higher number of Jewish people living alone.

“The Jewish community tends to be older,” Preuss said. Their children have long since moved out, and many have outlived their spouses.

Among the 130 countries with data available on households and religious affiliation, the household size experienced by the average person ranges from 2.7 people (in Germany) to 13.8 people (in Gambia).

The study was produced by Pew as part of the Pew-Templeton Global Religious Futures project, which analyzes religious change and its impact on societies around the world. 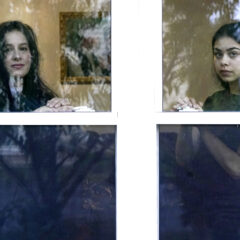 News
Study: Social hostility to religion declines, but government restrictions rise
Follow us on Facebook!
Submit your photos to RNS