(RNS) — The one statistic that even many casual observers of religion and politics can recite from memory is that 81% of white evangelicals voted for President Trump in 2016.

It’s true that, other than black Protestants, no other religious group in the United States is more politically homogenous than white evangelicals, and current polling tells us that the president is still very popular with this group.

But, to paraphrase Ronald Reagan, “a different political coalition is never more than a generation away.”

So one question as we head toward the 2020 election is whether young white evangelicals have been turned off by the Trump presidency. Could there be a Democratic-evangelical coalition in the future?

Looking at political partisanship is a good place to start. Using numbers from the massive Cooperative Congressional Election Survey, I broke white evangelical Protestants into four age groups and calculated their partisanship in both 2008 and 2018. Is there evidence of a Trump backlash in the most recent dataset? 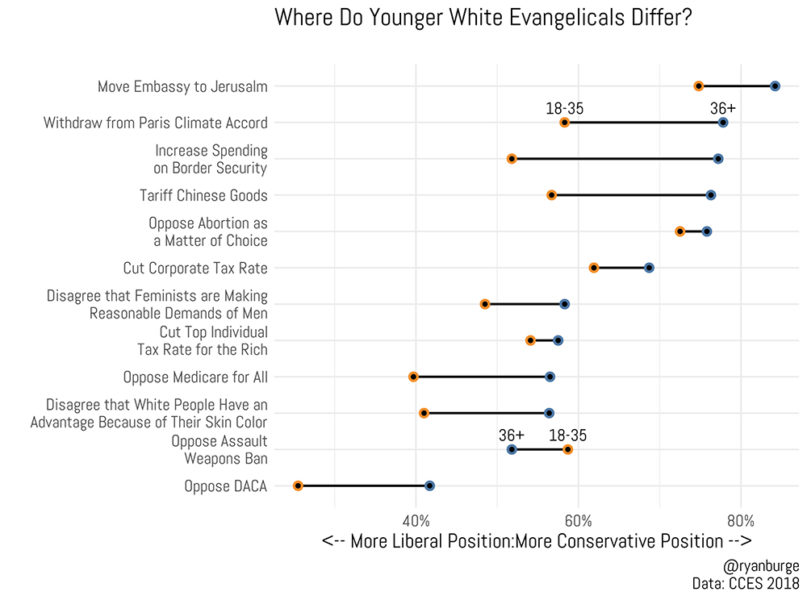 “Where Do Younger White Evangelicals Differ?” Graphic by Ryan Burge.

From this angle, the white evangelical connection with the Republican Party is certainly not losing its strength.

But, wondering if young evangelicals approach some issues in ways that don’t show up simply by party affiliation, I took my investigation a step further. The Cooperative Congressional Election Survey has a nice array of questions about abortion, taxes, gun control, immigration and gender/racial issues. I compared white evangelicals 18 to 35 years old to white evangelicals who were 36 or older on 12 different issues.

It’s fair to say that, on the whole, older evangelicals hold more conservative positions than those under the age of 35. On only one issue (banning assault weapons) do younger evangelicals fall further to the right on the political spectrum. However, there are several issues where the gap between the two groups is quite large.

On taxation and abortion, young white evangelicals look little different from the rest of evangelicalism.

But the question we’ve posed is how these fractures are likely to show up at the ballot box. 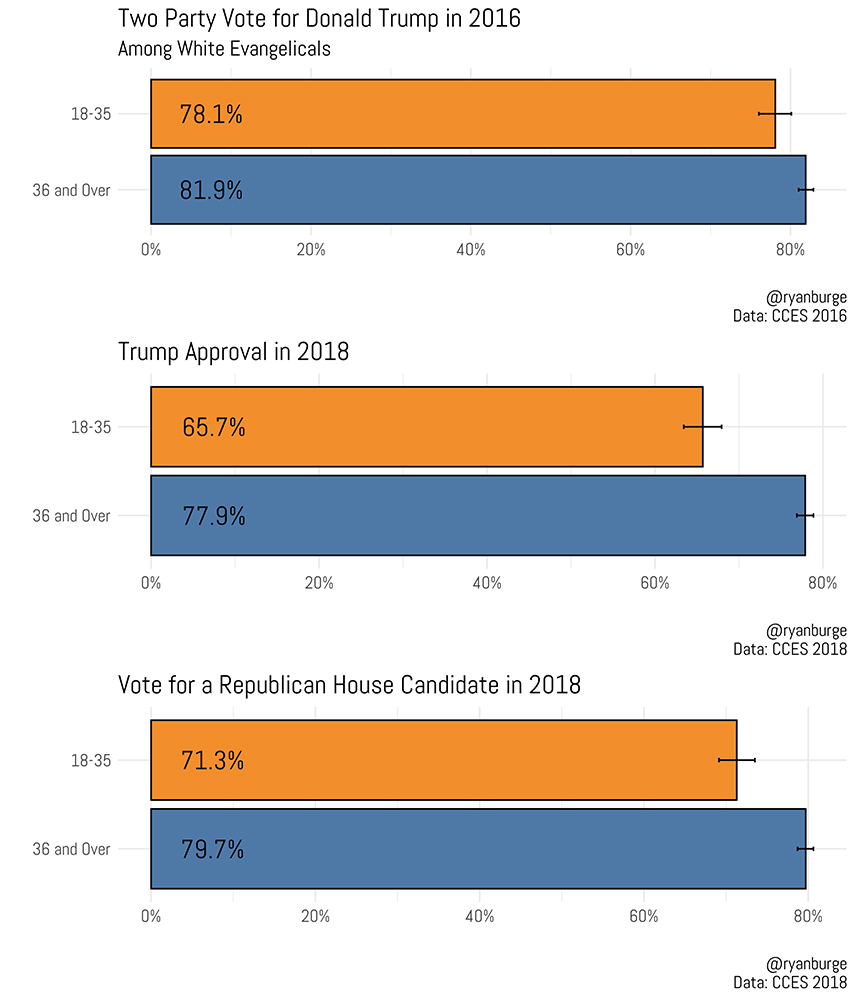 To look for answers, I calculated the share of the two-party vote that went for Donald Trump in 2016 among white evangelicals between the ages of 18 and 35 and then those over 35 years old. I did the same for Trump’s approval rating in 2018, as well as the vote choice for the House of Representatives in the 2018 midterm elections.

As for the first part of the calculation, young white evangelicals were just as enthusiastic for Trump in 2016 as their parents and grandparents, with 78.1% of the younger group voting for the GOP candidate, just shy of the 81.9% share of the rest of white evangelicalism.

That’s a significant softening of support. But that erosion in enthusiasm is nothing but posturing unless it is coupled with different voting behavior at the polls in the 2018 midterms. And here we see some small evidence of cracks emerging.

While 78% of young white evangelicals voted for Trump in 2016, the share that voted for his party in the 2018 midterms had slid to 71.3%. The decline among the rest of evangelicals was just over two percentage points.

So are young evangelicals as conservative as older generations?

There’s not a clear answer. On issues like immigration, health insurance and race and gender inequality, it does appear that younger evangelicals are drifting toward the center. But on bread-and-butter conservative topics like taxation, guns and abortion, they are strong Republicans.

In sum, it doesn’t appear as if a blue wave is emerging among young white evangelicals. Despite the disagreements that they have with the GOP on issues of human rights and the environment, they don’t seem able to stomach voting for any party but the Republican Party.

There’s a concept in political science that seems applicable in this case — negative partisanship. It would appear that young white evangelicals don’t love the Republican Party, but they abhor the Democrats. Checking the box next to Trump’s name is not affirming everything about his policies but, instead, is a vote against the Democrats’ eventual candidate. Until that shifts, don’t expect the narrative to change.