(RNS) — The media have paid a lot of attention to the rise of the religiously unaffiliated in recent years, and for good reason. In 1990, just 1 in 20 adult Americans were not connected to a religious faith. Today, it’s closer to 1 in 4. The ripples of such a shift are still being sorted out by observers of American religion.

One of the most visible effects is that the pews are much emptier today than they were just 30 years ago. What does that decline look like, in the simplest terms?

To answer that question, I divided data from the General Social Survey into three groups: those who attended church or another house of worship once a year or less, those who attended nearly every week or more and those in the middle of the attendance spectrum, and I graphed the changes over time. The results are sobering for people of faith.

In the early 1970s, about 38% of Americans attended church nearly every week or more. A third rarely or never attended church, while the rest attended once in a while. 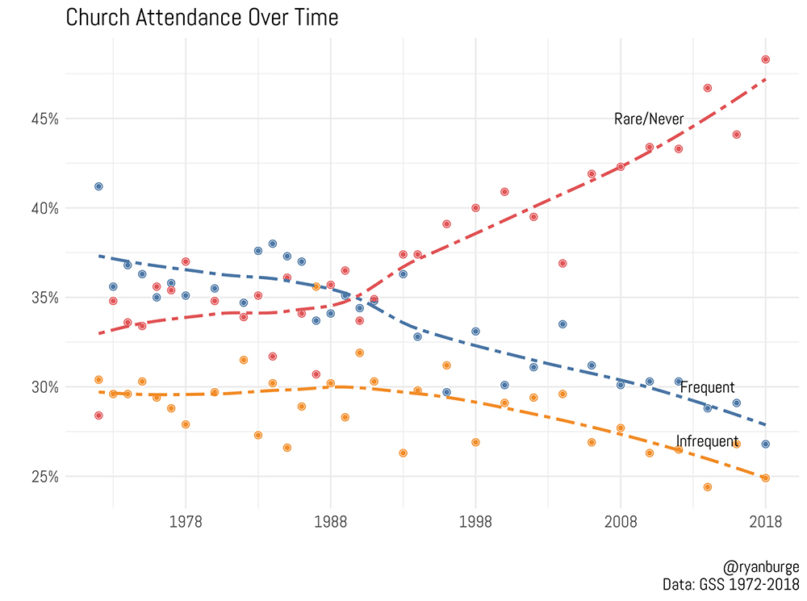 That all changed in the early 1990s, when the rarely/never attending category began a slow and unmistakable climb. Today nearly half of all Americans attend church once a year or less, and only about a quarter attend on a regular basis. A similar number attend once in a while.

We also began to diverge when it comes to believing in God.

But frequent church attenders today are just as sure about their beliefs today as they were in the 1990s. And, surprisingly, the same is largely true among those who attend church infrequently; their certainty about God has declined only very slightly.

“What Do You Believe About God? Broken Down By Church Attendance” Graphic by Ryan Burge

In essence, the people who never darken a church door have become much less certain of what they believe about God, while those who still make church part of their life are just as certain as they were before.

It’s been written that many Americans have abandoned church in a backlash to the takeover of American evangelicalism by the religious right in the 1990s. If that’s true, the data should show that Republicans now make up a higher share of church attenders and Democrats should be a larger share of those who never go to services.

In the 1970s there are almost no differences in the partisan makeup of each of the three attendance categories. Put simply, there was no Democratic God Gap in the 1970s. The percentage of frequent church attenders who were Democrats — 56% — was almost the same as the share of Democrats — 57.5% — who never attended.

The mystery, however, is with the never attenders.

Among those who never come to church, the share of Republicans has stayed exactly the same (27.3%) over the last 40 years, while the share of Democrats has dropped 7 percentage points, and independents have risen 7 points. If there was a relationship between politics and church attendance, it was that some people disaffiliated from both party and church.

The explanation may be that the nones, as the unaffiliated are often called, have grown so large now that becoming a none has become more palatable to political conservatives, who are fed up with church for reasons beside politics.

Whatever the cause, it’s clear that the gap on church attendance has become a chasm, separating those who attend at least a few times a year from everyone else. More important, perhaps, the chasm also exists in religious belief. While two-thirds of those who attend at least sometimes have no doubts about their belief in God, half of those who rarely or never attend struggle to believe in God most of the time.

This may make it more difficult for churches to attract these never attenders. Can people who are plagued with doubt feel welcomed by a church that is filled with those who are certain about what they believe?

I must confess that what led me do this analysis was listening to a podcast about the late Rachel Held Evans – a woman lived a parallel life to mine. We were born less than a year part, and grew up evangelical in small towns. We both attended Christian colleges and left that environment not sure of what we believed.

One thing I always appreciated about Rachel was that she wasn’t afraid to say that she doubted. In fact, her Twitter bio said that she was “a doubt filled believer.” Are doubt filled believers, like Rachel and myself, still welcome at churches where nearly 90% of the faithful have no doubts about matters of faith? If the American church is to stem the losses, new converts may be found in helping people embrace their doubts.