Chen was holding on to other secrets as well. Without her parents’ knowledge, Chen’s family says, she was receiving spiritual guidance from a priest at St. Thomas Aquinas, who told her that there was something she could never tell her family: She was a lesbian.

Chen struggled for many years to keep this secret, according to her family, and tried to follow the church’s teachings. But repressing her sexuality led to serious mental health problems that caused her to be hospitalized in 2016, Chen told The Denver Post last year.

Chen eventually left the church, feeling it was impossible to reconcile her sexual orientation and her Catholicism. In early 2019, she went away to Prescott College, in Arizona, to be farther away from St. Thomas Aquinas.

She seemed to be doing better, but on Dec. 7, while on a visit home, Chen, 24, was declared missing. After a search, her body was found at Gross Reservoir in Boulder County on Dec. 9. The Boulder County Coroner’s Office has ruled her death a suicide.

Chen’s death has focused attention on how religious institutions handle the question of sexuality in their counseling, especially when the counselor’s faith teaches that homosexuality is wrong or sinful. Last year, Colorado banned gay conversion therapy for minors. That ban, however, exempts religious counselors.

That’s something Chen’s mother and sister want to see changed. They believe the religious counseling Chen received contributed to her death. 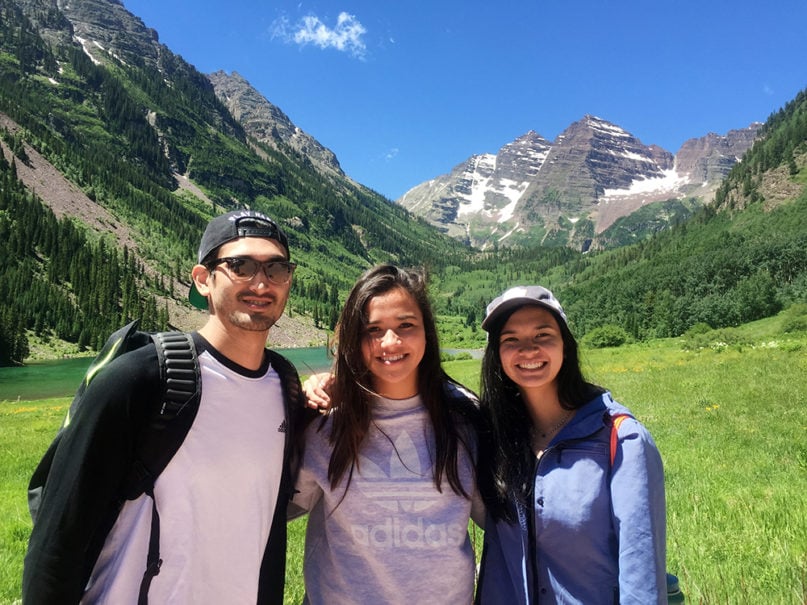 Alana Chen, right, with her siblings Sabatino Chen, left, and Sophia Chen, center, in 2016. Photo courtesy of the Chen family

Joyce Calvo-Chen, Alana’s mother, said that Alana grew up as observant as any average Catholic kid; she went to Mass at her local church and stayed on the right side of the commandments. But after attending a Catholic summer camp when she was 12 or 13, Calvo-Chen said, Alana become more devout and got involved at St. Tom’s, as she called it.

Alana started attending Mass at St. Tom’s almost every day, according to her mother. The Rev. David Nix, the parish priest at the time, asked Chen if he could be her spiritual director. Nix told her that he thought she could be a nun, Calvo-Chen said, and wanted to make her “perfect” in the eyes of God. It was during this time that Chen came out to him.

Eventually, Chen told her parents that she had been meeting with Nix. Calvo-Chen was upset that Nix had been meeting privately with her daughter without her knowledge and made an appointment to speak with him.

At the meeting, Calvo-Chen remembers Nix berating her for not being Catholic enough. He criticized her for allowing Chen’s older sister to date at 16 and handed her a CD on chastity, Calvo-Chen said.

“It was a crazy meeting,” she said. “I remember being so disgusted.”

The Archdiocese of Denver wouldn’t comment on private discussions between the Chens and their priests and denied that Alana had met with Nix without her mother’s knowledge.

Not long after the encounter, Nix was transferred to a new parish, and the Rev. Peter Mussett became the new parish priest. Calvo-Chen took a liking to him. Known around Boulder as the “hipster priest,” Mussett had long hair and an easygoing personality that endeared him to a town that, compared with the rest of Colorado, is considered more spiritual than religious. Calvo-Chen felt she could let down her guard around him, and the whole family started regularly attending St. Tom’s.

It was then that Calvo-Chen said she noticed that her daughter was not going to the altar to receive Communion. When the mother asked about it, she said, Chen gave an evasive answer.

At that time, Chen expressed interest in attending a Catholic college in Wyoming, but her parents objected because it wasn’t accredited, and she ended up going to the University of Colorado Boulder, a few blocks from St. Tom’s. The church has a very active campus ministry there. 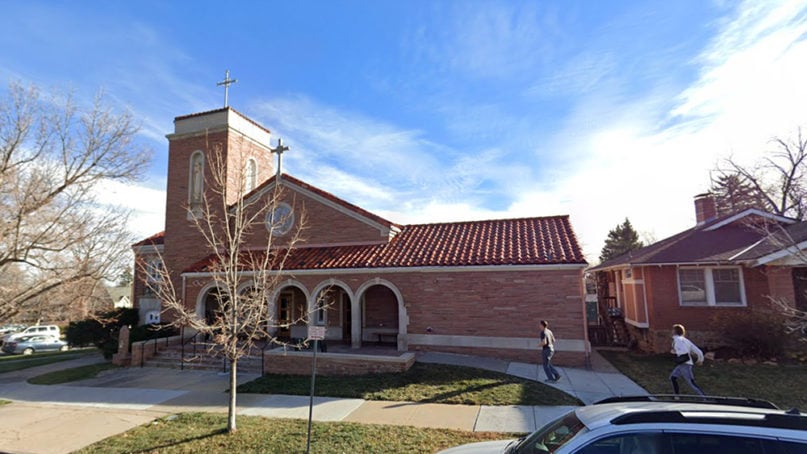 At CU, Chen became involved in the youth ministry and spent time with the Sisters of Life, a religious order with a branch in Denver that ministers to college students.

One day, Chen’s family said, Chen told a friend from campus ministry that she was having thoughts of suicide. That friend told a clergy member, and the police were called. Chen was admitted to a local psychiatric hospital.

It was while she was in the hospital that Chen told her mother that Nix had told her to keep her sexuality a secret from her family, for fear they would approve. Calvo-Chen was furious. “I couldn’t believe what they had done to her,” she said.

She told Chen that God loved her no matter what and found her a therapist. While Chen was at the hospital, her mother said, members of the Sisters of Life suggested the young woman receive formal counseling from Janelle Hallman, a Christian counselor in Denver. Hallman’s website advertises her practice’s “specialty in faith-based individuals with sexual and gender identity concerns.” Calvo-Chen refused to let her daughter go.

A statement from the Sisters of Life said that they provided spiritual accompaniment to Chen for about a year and a half but denied that they ever encouraged conversion therapy for Chen.

Mark Haas, a spokesperson for the Archdiocese of Denver, declined to comment on the Sisters of Life statement but said of Hallman: “Her website makes it clear that her approach is client-centered. As with any credible counseling, the client sets the goals of what they want to achieve.”

After her time in the hospital, Chen left the church. Her sister, Carissa, said their mother took Chen to a Catholic service at the Denver chapter of Dignity, an organization for LGBTQ Catholics. But Chen was put off by the service, she said. They worshipped in a basement, and they couldn’t take Communion, because it wasn’t led by a Catholic priest. She felt as if she was being segregated from the rest of the church.

“I love the true teachings of Jesus and Catholicism,” Calvo-Chen said. She said Alana loved her faith as well. “But she was told she could never have a relationship with a woman, and it was killing her,” Calvo-Chen said.

“Striving to be a community who welcomes anyone and everyone as Jesus did, we do not practice conversion therapy, and reject any other practices that are manipulative, forced, coercive or pseudo-scientific,” said the statement from St. Thomas Aquinas.

Nix, too, said in the church’s statement that he never engaged in conversion therapy with Chen or recommended it to her, and he said he was deeply saddened by her death. “In my 10 years of priesthood I have never told anyone that it was a sin to be attracted to anyone,” he said in the statement.

Haas later made clear in a separate statement to RNS, “A person is always free to accept or reject what the Church teaches, but it is not ‘conversion therapy’ or ‘religious abuse’ to teach about the beauty of a life of chastity.”

In the interview in The Denver Post, which took place several months before her death, Chen clearly indicated she believed the counseling she received amounted to conversion therapy. She told her sister she spoke to the paper to help others who had experienced conversion therapy and said she wanted to write a book when she was older.

Carissa Chen and a cousin have started the Alana Chen Foundation in her memory. They want to raise money to help people get access to mental health treatment.

One Colorado was a major supporter of the law to ban conversion therapy for minors, and the organization lobbied for it for several years before it passed.

A misconception about conversion therapy, Ramos said, is that it only describes extreme practices such as using electric shocks to try to change someone’s sexual orientation. But any therapy that attempts to change someone’s sexual orientation or gender identity should be considered conversion therapy, he said, and can have significant negative psychological effects.

The American Psychological Association discourages the practice, saying there is insufficient evidence that psychological efforts to change sexual orientation can be successful.

On Twitter, the Rev. James Martin, a prominent Jesuit priest and writer, expressed sadness at the news of Chen’s passing.

“Any death, especially a suicide, is a tragedy,” Martin told Religion News Service in an interview Thursday (Jan. 23). “That Alana Chen said that she was forced to undergo conversion therapy makes it all the more tragic and heartbreaking.”

He called on the church to discontinue practices that attempt to change people’s sexual orientation.

In January, the Episcopal priests in Boulder County published an opinion letter in the Boulder Daily Camera rejecting conversion therapy and expressing sorrow at Chen’s death.

“One of the texts we use in the Episcopal Church on Ash Wednesday is a prayer that begins ‘Almighty God, you hate nothing you have made.’ We believe that in its fullness — that no person in their gender identity is hated by God,” the letter read.

Since her passing, Chen’s family said, nobody from the Denver Archdiocese has reached out directly to them. (Haas said this is because it did not believe that contact would be welcome.) Her funeral was held at a local Episcopal parish.

“People will say different things about her suicide and how that came to be,” Carissa Chen said. “I think the church played a huge role in the years of trauma and treatment that she went through and ultimately her suicide, and they’re just going to have to live with that. We all will now.”