WASHINGTON (RNS) — Inside the International Ballroom at the Washington Hilton, the mood at the National Prayer Breakfast was half church service, half political rally.

The program began with a spirited rendition of Hank Williams’ “I Saw the Light,” led by members of the House of Representatives’ prayer breakfast group, followed by prayers from the co-hosts, Rep. John Moolenaar, a Republican from Michigan, and Rep. Tom Suozzi, a New York Democrat.

Their prayers and opening remarks echoed the larger theme of the prayer breakfast this year, which centered on Jesus’ commandment to love your enemies.

The two were also featured in a video about religious persecution, another focus for this year’s event. After the video — and the entrance of President Donald Trump, carrying a newspaper with the headline “Acquitted” — Speaker of the House Nancy Pelosi led a prayer for those suffering religious persecution around the world, including Muslims, Yazidis, Buddhists, Christians and those from other faiths.

“Let us pray that the names of the persecuted always live on our lips and their courage carried through our actions,” she prayed. “And let us pray that we honor the spark of divinity in them and in all people, including ourselves.”

The recent division in the United States over Trump’s impeachment was on the minds of attendees and organizers alike. Several mentioned the theme of the day was especially timely — and that gathering people together around tables to talk and get to know each other is one way to defuse some of the tensions in the country.

“If we are to heal our divisions — we need to spend time together,” he said.

Suozzi’s words echoed a larger belief of The Fellowship, the nonprofit that puts on the National Prayer Breakfast. Members of the group describe themselves as friends who get together to talk about the teachings of Jesus. While the group positions itself as open to all faiths, the themes of the event are distinctly Christian. 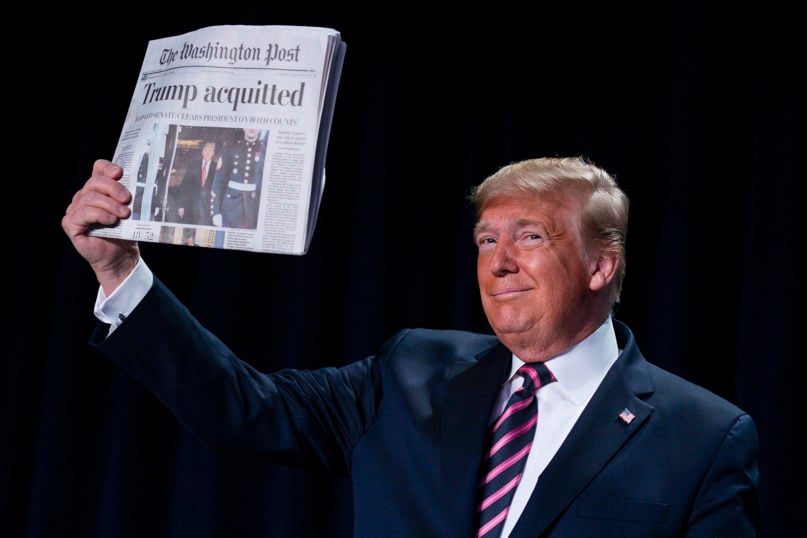 President Donald Trump holds up a newspaper with the headline that reads “Trump acquitted” during the 68th annual National Prayer Breakfast, at the Washington Hilton, on Feb. 6, 2020, in Washington. (AP Photo/ Evan Vucci)

Author and Harvard professor Arthur Brooks urged those in attendance not to let their disagreements over politics lead to contempt. Brooks recalled speaking to a group of conservative activists and telling them their political opponents were neither evil nor stupid.

That line, he said, did not get much applause.

He went on to talk about being raised by Christian parents in Seattle, who had progressive politics. His parents were neither evil nor stupid, he said. And he challenged listeners to remember their loved ones who have different points of view — and to stand up for those who would ridicule them.

Brooks also said Jesus asked his followers to love their enemies — not just tolerate them. Putting that into practice, he admitted, is hard.

“The devil is in the details,” he said.

Trump admitted as much in his remarks, which included several mentions of the impeachment trial. He seemed a bit skeptical about the call to love his enemies.

“I’m trying,” he said, a response that was greeted with smiles and laughter.

David Myhal of Westerville, Ohio, a first time attender, said he appreciated the day’s theme. He said he was encouraged to see so many people praying together and admitted that loving your enemies is not easy.

“It’s about the hardest thing a person can do,” he said.

Myhal said he also sympathized with the president, saying he had been through a difficult time, so it made sense he was less than enthusiastic about the day’s message. Myhal said he appreciated Trump’s honesty.

Toward the end of the breakfast, gospel singer Cici Winans received a standing ovation after a stirring rendition of her song “Alabaster Box.” She then led the audience — which organizers said was about 4,000 people, including 1,000 foreign guests — in singing a chorus titled “Alleluia.”

Cece Winans led a chorus of Alleluia at the National Prayer Breakfast pic.twitter.com/iPl09m4eBb

Civil rights legend and Georgia Congressman John Lewis, who is battling cancer, gave the benediction by video, while attendees joined hands and bowed their heads.

He said the country needed peace, “now more than ever before.” Lewis asked God to bring the country together and prayed Americans would treat each other as “brothers and sisters.”

In his prayer, Lewis recalled facing death when he was beaten while crossing the Edmund Pettus Bridge in Selma, Alabama, on a civil rights march.

He said he never gave up, because God helped him. And he urged attendees to become one family.

“We must believe in one another,” he said. “We must never give up on our fellow human beings.”