CHARLESTON, S.C. (RNS) — Before delivering his Sunday sermon this week, Rev. Joseph Darby took a moment to address the elephant in the room: the upcoming South Carolina Democratic primary.

Just because a candidate “ran strong in two of the whitest states in America, that doesn’t mean they’re going to run strong in South Carolina,” he told worshippers at Nichols Chapel AME. “Let the church say ‘amen!”

Parishioners, many nodding in agreement, replied in unison: “Amen!”

Darby — who, like many pastors in South Carolina, doesn’t shy away from politics — then encouraged congregants to attend an outreach event just down the street hosted by the activist group Black Voters Matter. But when asked if the church was involved in the event, Darby said no, explaining he had only learned about it minutes before the service began.

“The civil rights movement of the ’50s and ’60s … was spearheaded by the black church,” he said. “Now you’ve got Black Voters Matter and Black Lives Matter. They don’t have that same connection to the church, because it’s not seen as a spiritual battle as much as it is a social-political battle.”

This distinction points to a new reality for Democratic candidates as they court black Protestants ahead of a South Carolina primary on Saturday in which the African American electorate plays an outsized role. Presidential hopefuls can no longer count on the church as the principal forum to connect with black voters: Instead, they must balance that appeal with courtship of a younger population that’s just as likely to rally behind secular activists as it is to heed advice from pulpits.

But in the decade since then, he said, times and tactics have changed as Black Lives Matter and other grassroots activist efforts flourished.

“You can’t just go to more traditional established institutions like the black church,” said DuBois, who now leads Values Partnerships, a consulting firm focused on issues including race and religion.

“You also have to engage some of the younger, non-religious infrastructures in the African American community,” DuBois added. “They’re both important — even more so now than they were 12 years ago.”
Of course, Democratic candidates have attempted to replicate Obama’s triumph this year. Virtually all have worshipped at black churches or met with groups of black ministers, and several have sent surrogates to speak to congregations across the state. 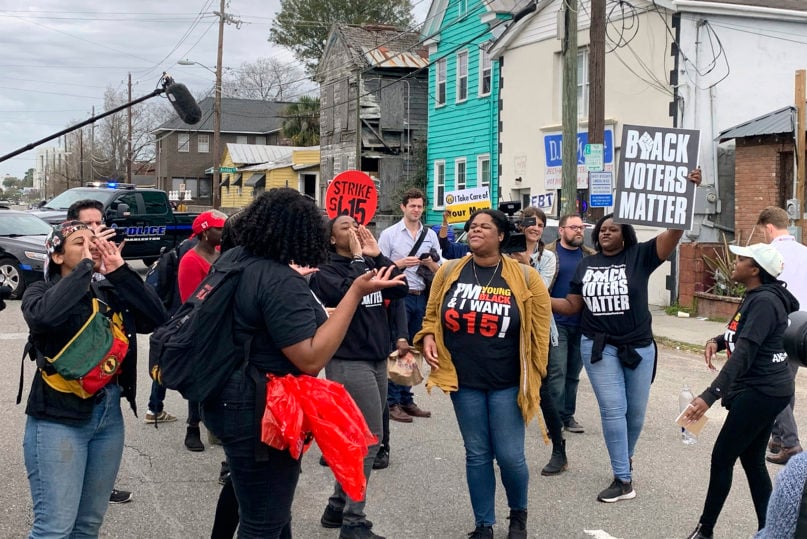 Demonstrators affiliated with Black Voters Matter and Black Youth Project 100 protest presidential candidate Pete Buttigieg in North Charleston, S.C. on Monday, Feb. 24, 2020. The political divide between the black church and black activism was on full display this week in Charleston as Buttigieg worked to garner support among a constituency he has struggled to excite. RNS photo by Jack Jenkins

His campaign hired a South Carolina faith outreach director in August and announced the endorsement of 100 local faith leaders in December. Faith outreach seems to permeate virtually every layer of his campaign in the state: On the wall of Biden’s North Charleston field office hangs a sign with the slogan “Preachers (heart) Joe Biden.”

According to Darby, has been an effective strategy for reaching religious voters. Among “churchgoing folks — 40-45 and up — I’m still hearing pretty solid support for Biden,” he said on Sunday.

Among black voters under 35, however, it was Bernie Sanders with the lead in a national Washington Post-Ipsos poll taken last month. And the emergence of more secular racial justice movements — focused particularly on criminal justice reform and racial disparities in the economy — have added new pages to the old electoral playbook in South Carolina.

Venkayla Haynes, 25, who traveled to South Carolina ahead of the primary with Black Voters Matter, said that she doesn’t identify with a particular faith and added “I don’t really pay attention to religion when I look at a candidacy. It’s more based on their values and their policies.”

Sanders surrogate Mike Render, the rapper also known as Killer Mike, delivered a speech at a historically black college last year urging voters to, “like they do in the black church, look to your left and look to your right … say: neighbor, the time is now.” Render’s remarks became the soundtrack to a video the Sanders campaign released this week that’s focused on black voters.

DuBois, the former Obama faith adviser, noted that Sanders’ support among younger activists could result in ever-greater numbers as the primary season progresses beyond South Carolina.

The political divide between the black church and black activism was on full display this week in Charleston as Buttigieg worked to garner support among a constituency he has struggled to excite. Former South Bend, Ind. Mayor and Democratic presidential candidate Pete Buttigieg, center, speaks to activists as they gathered outside a McDonald’s restaurant in North Charleston, S.C. on Monday, Feb. 24, 2020, to demand a $15 an hour wage for fast food workers. The political divide between the black church and black activism was on full display this week in Charleston as Buttigieg worked to garner support among a constituency he has struggled to excite. RNS photo by Jack Jenkins

The former South Bend, Indiana, mayor was warmly received when he attended services at First Baptist Church of James Island on Sunday. Buttigieg cited scripture while addressing the church from the pulpit and the pastor, Rev. Charlie Murray Jr., referred to the candidate as “Reverend Pete”when speaking to reporters.

But he faced a more combative reception the next day when he joined a group of activists — primarily people of color — who gathered outside a local McDonald’s to demand a $15 an hour wage. Shortly after Buttigieg addressed the group, Black Voters Matter demonstrators began chanting “Pete can’t be our president, where was $15 in South Bend?”

Buttigieg responded by making a hasty exit. His campaign later pointed out that local jurisdictions are not allowed to raise minimum wages in Indiana.

“Black people are not a monolith,” said Gadsden, who also opposed Buttigieg’s presence at the march. Black Voters Matter partners with several South Carolina churches in their work.

Despite generational differences, many black voters in South Carolina say they can ultimately unite around certain issues.

“There’s not that big a chasm between what I think about candidates, how they affect my community, and that of my children, because we have a much greater common experience than we have an uncommon experience,” said Rev. Nelson B. Rivers III, a Baptist pastor in Charleston who is also a vice president at the National Action Network.

“We have a lot in common — being black in America has a way of doing that,” said Rivers.
___
Jack Jenkins reports for Religion News Service and Elana Schor reports for The Associated Press.