(RNS) — When Howard Mallory first saw the Gospel of Matthew rendered in American Sign Language nearly 15 years ago, he said he was able to understand it more easily than when reading it in English.

“Seeing it in sign language, it was amazing,” said Mallory, a deaf Jehovah’s Witness from Northfield, New Hampshire. “Of course, we wanted more. Only one book was done.”

On Feb. 15, the last of the Bible’s 66 books — the story of Job — was released in video on the Jehovah’s Witnesses website, completing what Robert Hendriks, U.S. spokesman for the church, said is the only complete Bible in ASL.

There have been 60 million downloads of the free videos — the signers are all men, dressed in jackets and ties — with the English translation below, since the Gospel of Matthew was released in 2006.

RELATED: At Gallaudet University, deaf culture and faith mix to create something new

“We’re not aware of any other translation ever in history in sign language, in any sign language that is complete,” said Hendriks in an interview. “There are many who have begun the translation, some who feel they’ll finish it soon, some who are way off. But this is the first complete Bible with the 66 books.”

According to the website of United Bible Societies, which did not respond immediately to a request for comment, other Bible societies have been working on a similar goal.

“There are over 400 sign languages and yet some Bible translation has so far only been carried out for 40 of these and no sign language Bible exists,” reads its website.

The American Bible Society, likewise, says in an October 2019 post on its website that there was no complete sign-language Bible, “but we are inching closer and closer to changing this.”

Deaf Missions, an Iowa-based Christian organization, is close, with hopes of reaching a “broader scope of historic Christianity.”

“Praise God, we have finished translating the entire New Testament and 33 out of 39 Old Testament books,” said CEO Chad Entinger, in an emailed response to Religion News Service.

“We look forward to celebrating on October 1, 2020 the faithful, diligent work of those who have worked with Deaf Missions through the years to get all 66 books translated into ASL — the native, preferred and heart language of Deaf people.” 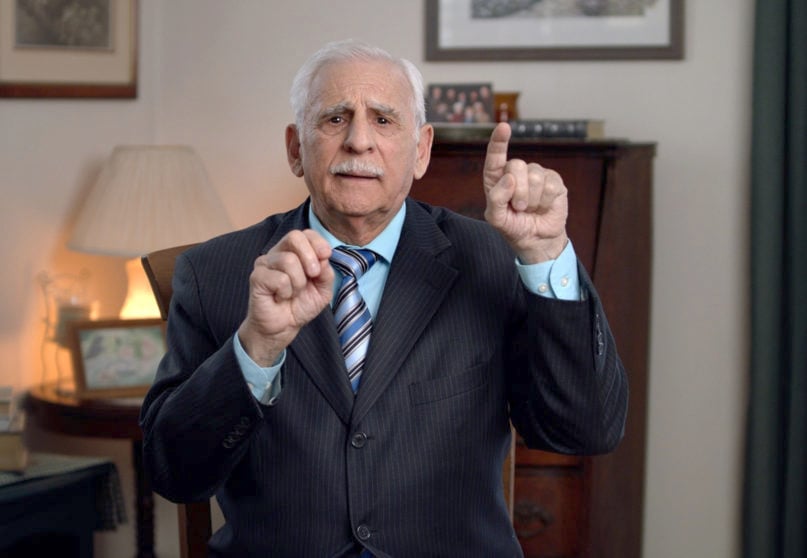 Mallory, 79, a Jehovah’s Witness for 50 years, said he now can use the ASL Bible on his iPad or his phone, which he called “much easier” than the DVDs he received as the Gospel of Matthew was distributed. Mallory, whose son Tim interpreted his video interview with Religion News Service from Peekskill, New York, said he helped his father give the Jehovah’s Witnesses translators feedback on their work, including the first and second books of Kings, as they were in development.

Howard Mallory said his favorite section of the Bible is the Book of Daniel, because “it helps me to understand different prophecies and how they’re being fulfilled today and what’s going to happen in the future.”

Mallory attends one of the 231 ASL congregations among the 13,000 U.S. gatherings of Jehovah’s Witnesses. Of the 1.3 million active members, known for knocking on doors and standing on street corners to bear witness of the faith, about 2,300 are deaf.

Mallory isn’t the only one who says that the Bible is more alive in ASL than it is on the page.

Janice Adams, 65, a Jehovah’s Witness who is deaf and blind, often reads the Bible in English Braille but said, “I still greatly appreciate the ASL New World Translation when someone tactilely interprets the videos for me at home or at the meetings,” she said in an email. In tactile interpretation, Adams places her hand on her husband or other signer’s hand to feel the placement, shape and movement of the signs they see in the videos.

“The ASL is more natural, vivid, and expressive,” she said, than Braille.

The Jehovah’s Witnesses ASL Bible reflects the emphasis of the religious group’s members on getting the Bible to people in their own language — the ASL brings the complete versions of the church’s 1950 New World Translation to 186.

“We prefer the New World Translation primarily because it restored God’s name to its proper place in the Scriptures,” said Hendriks.

He cited as an example a verse from Psalm 83, which reads in the Jehovah’s Witnesses’ translation: “May people know that you, whose name is Jehovah, You alone are the Most High over all the earth.”

Other translations — though not the King James Version — use the word “God” or “Lord” in that verse.

Hendriks said the translation is also “thought for thought” rather than word for word.

“The key is, we want everyone to understand the Bible, not just read it,” he said.

Tim Mallory, who accompanied his father to the Feb. 15 celebration of the unveiling of the complete ASL Bible in West Palm Beach, Florida, said the excitement among some 2,500 deaf people in attendance was palpable.

“It was electric, being in the room,” he said of the audience who raised and waved their hands in the traditional way deaf people applaud. “The crowd went wild.”