(RNS) — Every day for the last two weeks, I’ve been reading updates about the coronavirus epidemic, and every day, I’ve experienced anxiety. The “not if but when” stance of the Centers for Disease Control, coupled with an overactive imagination  (fueled by reading the dystopian novel “Station Eleven” and watching every disaster movie ever) contribute to this. My anxiety is logical and probably a bit overblown all at the same time.

It’s a good thing I’m part of a religion that teaches preparedness.

Regular readers of this column know that I’m what they call a “progressive” member of The Church of Jesus Christ of Latter-day Saints, which ordinary non-Mormon people would likely call “moderate.” I’m a feminist and an LGBT ally, and I have sometimes criticized my church for its slow, recalcitrant adaptation to a more just and egalitarian world.

But I’m also deeply religious, and there are far more things that I love about my church than things that frustrate me about it. One thing I love is the church’s consistent, and decidedly unglamorous, emphasis on preparing for emergencies.

I’ve sat through Relief Society lessons on what to pack in a 72-hour kit and how to reconvene with your family if there’s a disaster and you can’t go home but also can’t connect with each other by phone or text. (Answer: Designate a walkable meeting place in advance, like the parking lot of your neighborhood elementary school. You’re welcome.)

Mormons are famous for this stuff. When I was in my 20s, it was my church’s emphasis on saving for retirement and having an emergency fund that spurred me to get out of debt and open a Roth IRA. It was my church that taught me the power of compound interest, the eighth wonder of the world; and it was through a church-sponsored “providential living” event that I learned that pinto bean fudge you concoct from the staples in your food storage can be oddly, unexpectedly tasty. You’ll have to trust me on that last thing. I wouldn’t have believed it either.

My people have been through a lot, so that pinto bean fudge was born in a tough place. From our history of persecution and exile and loss we know that s— happens, even though we can’t say “s—” because we’re Mormons.

We used to be told to store enough supplies to last for two years. Then the recommendation became one year. Today, we’re asked to store enough for three months in the short term, while also building a supply for an unspecified long term.

RELATED: Doomsday preppers put faith in God and plan for the end of all things

I think the main point is to think ahead. Disaster of one kind or another isn’t a question of if but when — the period of unemployment, the winter storms that knock out power for days and prevent travel, or a Coronapocalypse that could keep you quarantined at home for weeks.

So as I’ve Googled coronavirus updates, I’ve also been tweaking our food storage, getting a bit ahead of the curve so if that last disaster materializes in the next few weeks, we’d be OK at home. I still have some work to do on it. It’s a fine line, storing what you need for your own family without hoarding or preventing access for others.

I pray we won’t have to use our food storage. I also pray that if the time comes that we do have to use it, we’ll have enough faith and trust in God to open up whatever we’ve gathered to share with our neighbors. 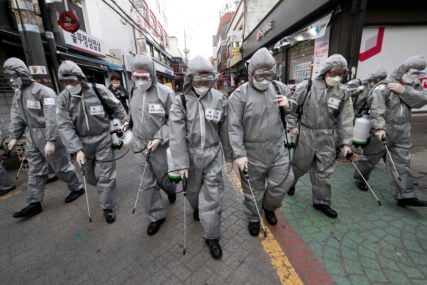 Army soldiers wearing protective suits spray disinfectant as a precaution against the new coronavirus at a shopping street in Seoul, South Korea, on March 4, 2020. The coronavirus epidemic shifted increasingly westward toward the Middle East, Europe and the United States on Tuesday, with governments taking emergency steps to ease shortages of masks and other supplies for front-line doctors and nurses. (AP Photo/Ahn Young-joon)

There’s an extreme version of Mormon food storage called the “prepper” wing. These are the folks who are stockpiling food and weapons for the end of days. They’ve been in the news lately because of an Idaho couple whose children have been missing since September and who have several other family members who’ve died under mysterious circumstances.

It’s an understatement to say that the preppers don’t represent mainstream Mormons. While they’re making the news because of alleged nefarious deeds and really weird theology, the rest of us are quietly buying up a few extra cans of green beans and storing them under the bed just in case. Food storage isn’t newsworthy. Most of us aren’t imagining that our green beans will save us in the event of the second coming so much as hoping they’ll come in useful should there be “too much month at the end of the money.”

Like I said, I hope I don’t have to use my food storage. But I’m awfully glad to know that it’s there. There’s a scripture in the Doctrine & Covenants that says, “If ye are prepared, ye shall not fear.” I won’t say I’ve stopped fearing the coronavirus and the possible havoc it could create in our society, to say nothing of the danger it poses to people’s health, especially for the elderly and the immunocompromised.

But I’m less afraid than I would have been without the green beans, and the oats, and especially the extra Girl Scout Cookies.