(RNS) — A high-priced offer to attend a private Mass with Pope Francis made available only to owners of Rolls-Royce cars has reportedly been canceled, with the company no longer promoting the chance to meet the pontiff on its exclusive app.

Religion News Service reported on Thursday (March 5) that Rolls-Royce promoted an offer — which the Vatican press office said it was unaware of — to attend a private Mass with the pope via the company’s Whispers app. The advertisement for the promotion, which carried a price tag of about $155,000, in addition to a suggested donation to the Catholic Church of $112,000, promised potential customers that Francis “will administer the Holy Sacrament by his very own hands, leaving you and your guest(s) with personal blessing that will be unique to each of you.”

But according to Catholic News Agency, the organization facilitating the offer, Italian Luxury Living, has now rescinded it in the wake of RNS’ reporting.

CNA reported that Rolls-Royce and Italian Luxury Living “have decided mutually to cancel the offer to meet Pope Francis.”

In addition, Italian Luxury Living’s website has been taken down. It now carries a message written in Portuguese that roughly translates as: “The site is down for maintenance. The return forecast is for April 5, 2020 2:25 pm.”

Representatives for Rolls-Royce and Italian Luxury Living did not immediately respond to requests for comment. 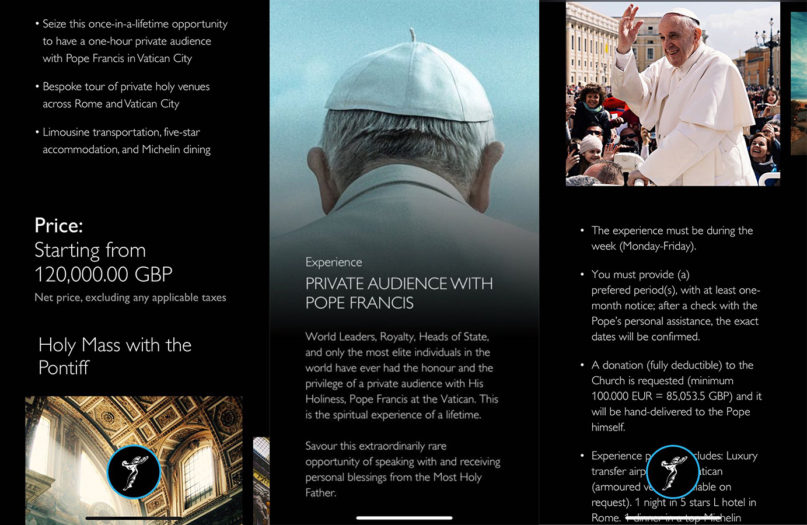 Screenshots of the Rolls-Royce app and the former promotion for a private audience with Pope Francis. Screenshots