(RNS) — The Christian faith is not just a personal commitment, it is also a communal experience. From the very beginning, Christians have gathered to share the Word of God and break bread in confined spaces. They drank from the same cup and shared a holy kiss. They also cared for the poor and the sick.

All of these Christian practices are now seen as ways that the coronavirus can spread through populations. That is why the coronavirus is so threatening, not only physically but also spiritually.

In a pre-scientific age, we might carry on and ask God to protect us. Many saints died caring for plague victims. Aloysius Gonzaga, patron saint of the Jesuit high school where I live, died in 1591 at the age of 23 while caring for victims of the plague in Rome.

Today, public health officials recommend that we put distance between ourselves and others so as not to spread the virus. At first blush, this “social distancing” sounds un-Christian, but we need to listen to medical experts. As with doctors, the first rule of a Christian at this time is “Do no harm.” That means not doing anything that might spread the virus to others.

In the time before germs and viruses were understood, people blamed strangers, Jews and witches for sickness. Anyone who was different could be the target of people’s fear. The public was also offered potions that often caused more harm than good. Even today, conspiracy theories abound and fake cures are sold to the gullible. Again, we need to listen to medical experts and not to conspiracy theorists who use any crisis to make money or stir up hatred and division.

The experts tell us that the best ways to avoid the virus are truly simple:

Like Naaman, the Aramean general we read about in the Bible’s Second Book of Kings, who scoffed when the Prophet Elisha told him to wash seven times in the Jordan to cure his illness, we don’t take simple solutions seriously. But we need to listen to Naaman’s servants, who challenged him by saying, “If the prophet told you to do something extraordinary, would you not do it? All the more since he told you, ‘Wash, and be clean’?” 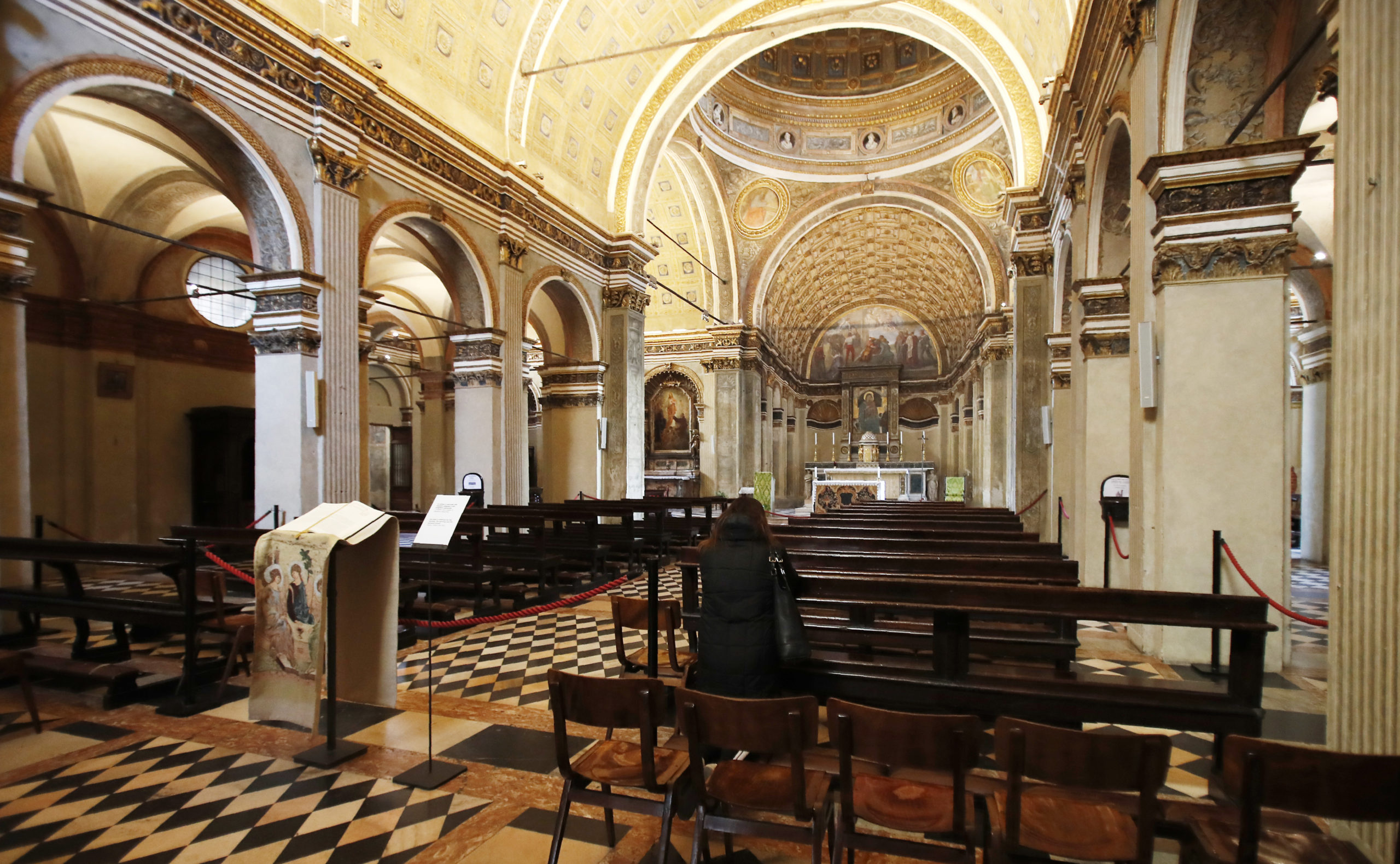 A woman prays in an empty Santa Maria presso San Satiro church on Ash Wednesday, in Milan, northern Italy, on Feb. 26, 2020. Italy has been struggling to contain the rapidly spreading outbreak that has given the country more coronavirus cases outside Asia than anywhere else. (AP Photo/Antonio Calanni)

Since Catholics gather to celebrate the Eucharist every Sunday, they have had to take preventive measures to avoid the spread of the virus. In China and Italy, services have been canceled and churches have been closed at the advice of public health officials.

In the United States and elsewhere, Catholics have been strongly urged to receive Communion in the hand and not on the tongue. Every Communion minister knows that it is impossible to distribute Communion on the tongue without touching at least some tongues. This means the minister must stop and disinfect his or her hands or risk giving the virus to the remaining communicants.

Only the sacred bread is being distributed at many Catholic Masses, not the cup. Priests who concelebrate are receiving though intinction, where the bread is dipped into the cup before reception.

Priests and Communion ministers are told to disinfect their hands before and after distributing Communion.

In addition, holy water fonts have been emptied and people have been asked not to kiss church statues or crucifixes during their devotions.

All of these are reasonable precautions to take during this crisis. We will be able to return to normal when the epidemic is over.

But Christians have a responsibility beyond practicing personal hygiene. We also have a public responsibility to support civic programs to protect the vulnerable and care for the sick. In the short term, that means supporting health care workers who put themselves at risk caring for those who have fallen ill. It means scrupulously following the instructions of public health officials. It means supporting programs to help those without health insurance, without sick leave, without day care and without paychecks because their employers have laid them off during the health crisis.

Beyond these short-term responses, Christians also must demand that their government be better prepared for such epidemics. Cutting budgets for research and preparedness is not only shortsighted but dangerous. In a globalized world, pandemics must be expected and planned for. When this crisis is over, we cannot go back to sleep and ignore the best advice from scientists and experts.

The saints of old risked their lives for those with the plague. We can at least do our civic duty.