(RNS) — National Christian groups are urging larger and more stable churches to financially help small churches that could potentially close in their communities due to a steep decline in offerings in the wake of the coronavirus pandemic.

Through the Churches Helping Churches Initiative, a relief fund has been set up to provide $3,000 grants to churches at risk of closing in the next three months due to a decrease in financial giving. The initiative is led by the AND campaign, with support from other organizations like the National Latino Evangelical Coalition and the Pinetops Foundation.

Organizers hope to raise at least $500,000 in April through help from Christian donors, foundations and large churches. More than 20 donors have already contributed more than $160,000. The National Christian Foundation will be administering the grants.

An application process opened Monday (April 6) for small churches to apply for the $3,000 grants. This initiative is targeted toward congregations, which are between 25 to 150 members in size, in low-income communities and in urban areas that have been disproportionately impacted by the COVID-19 economic shutdown. Rural churches in low-income communities will also be considered.

Congregations in low-income Census tracts are encouraged to apply, said Justin Giboney, president of the AND Campaign. To qualify, churches must be registered as religious nonprofits. The application must be submitted by an officer, such as a pastor, of the church. Churches will not be told how to spend the money.

“This is no strings attached,” Giboney told Religion News Service.

Small churches, Giboney said, play a big role in their neighborhoods, whether it be by feeding the poor or by simply establishing a community presence.

“A lot of these communities are dependent on these smaller churches,” Giboney said.

Giboney said that although the federal government has moved to provide some assistance to nonprofits, it’s important for the church to be the first to help “their brothers and sisters in need.” 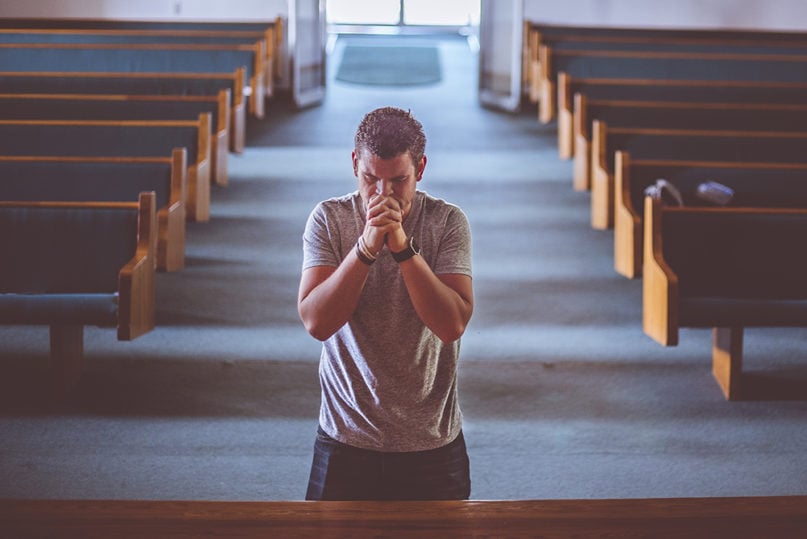 A man prays alone in an empty church. Photo courtesy of Pixabay/Creative Commons

Many small churches don’t have hefty savings accounts or large annual incomes and rely heavily or solely on weekly offerings.

On average, churches with weekly attendance of 50 or fewer people generated an annual income of $45,000, according to 2015 data from the Faith Communities Today research coalition, which runs national surveys on congregations.

And, a new Barna survey that included 434 Protestant senior and executive pastors found that nearly 8 in 10 (79%) said financial giving was down, with nearly half (47%) reporting it is down “significantly.”

Black and Latino startup churches are among the congregations that have been financially impacted by the pandemic.

In New York, pastor Kerlin Calderon said his church, Grace Tabernacle, or Tabernáculo de Gracia, may have to dip into its savings to pay for rent if the coronavirus shutdowns continue for another three months. It’s a church of about 150 people.

The church, which Calderon started in the Bronx three years ago, has seen its weekly offerings dwindle. That’s alarming given that the church has been crucial in delivering toilet paper, milk and other supplies to elders of a neighborhood housing project.

Former NFL player Benjamin Watson is also part of this relief fund effort and has been promoting the initiative on social media. In a statement, he said churches are “pillars of hope and charity for their community in times of crisis.”

Organizations, churches and individuals who want to give toward the fund and pastors of small at-risk churches can apply at ChurchRelief.org.