This story is part of a series produced by the Religion News Service in partnership with the Pulitzer Center.

(RNS) — Like many nonprofits, Catholic Relief Services, the 77-year-old global humanitarian aid organization founded by the U.S. Conference of Catholic Bishops, saw donations tumble in the early days of the COVID-19 pandemic.

But the downturn didn’t last.

“People are most generous during a crisis,” said Bill O’Keefe, executive vice-president for Mission, Mobilization, and Advocacy for the organization.

By summer, CRS’ budget, which runs to nearly a billion dollars annually, was back on track, according to O’Keefe, as donors were eager to help those in need, despite their own struggles.

But in spite of their resilience in the short term, faith-based charities like CRS face a challenge that is affecting nearly all religious organizations: They increasingly rely on older members to both fund and support their work as volunteers. 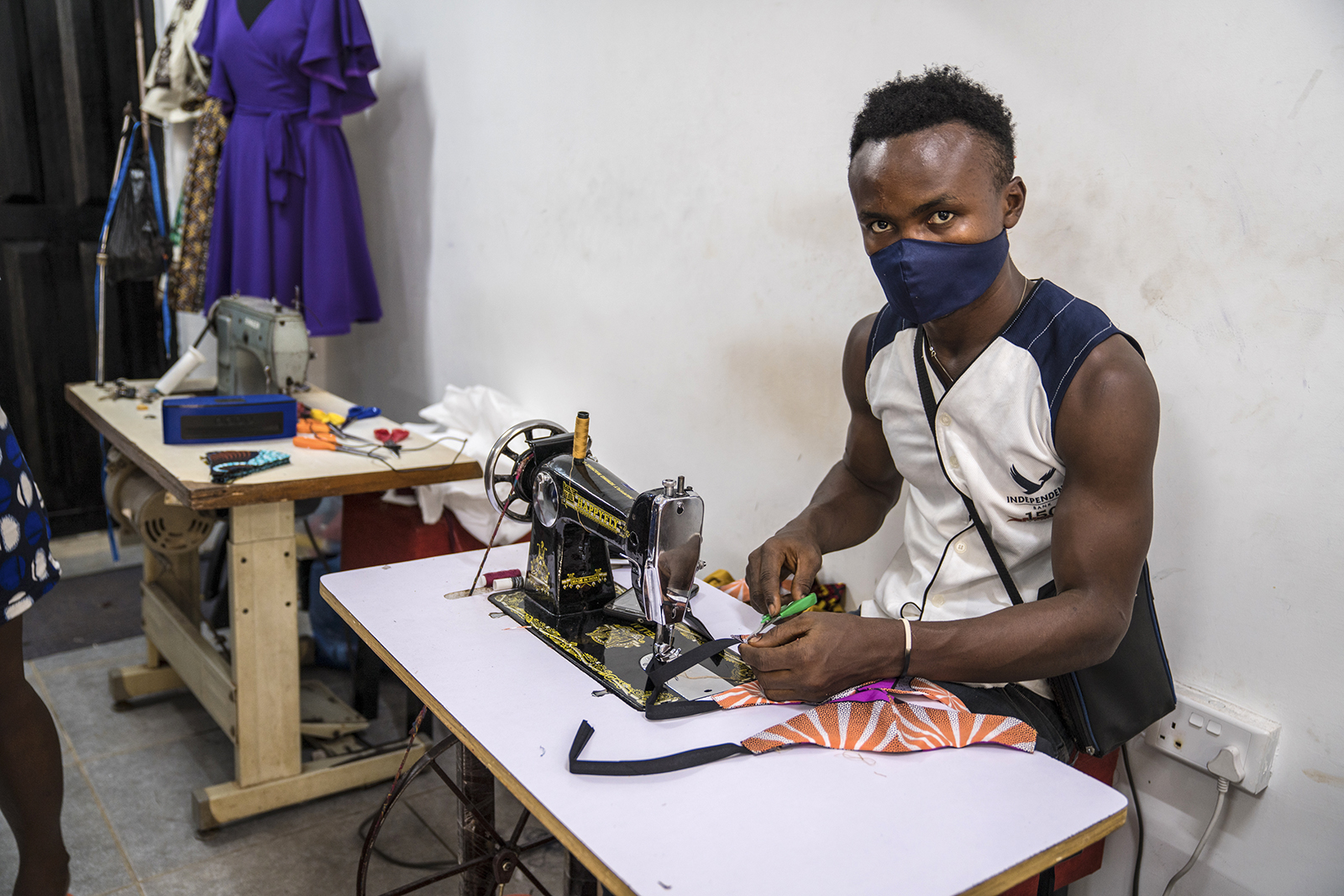 Local tailors and fashion houses are producing more than 300,000 cloth masks for the Freetown City Council’s #MaskUpFreetown campaign in Freetown, the capital of Sierra Leone, in Western Africa. With support from the European Union in Sierra Leone, Catholic Relief Services is supporting the Freetown City Council’s response to COVID-19. This support is focused on educating the public, minimizing the spread of misinformation and taking some proactive measures to prevent COVID-19 transmission. Photo by Michael Duff for Catholic Relief Services

Catholic Relief Services gets about a quarter of its funding from private sources, including about $20 million from special collections in Catholic dioceses or other parish-level programs.

Most of their donors are Catholics who go to Mass weekly and are likely to be active in other Catholic institutions, with an average age of 72.

Aware of its aging donor base and the changing demographics of Catholics, where the declining number of white Catholics is being offset by a growing number of Hispanic Catholics, CRS has sought to expand its base of support.

The nonprofit has expanded its outreach to Hispanic Catholics, many of whom, O’Keefe said, are more sympathetic to the concerns of the poor around the world, having experienced poverty and other challenges of their own. His organization has also reached out to younger Catholics who may be interested in their mission and Catholic social teaching even if they are skeptical of organized religion.

“The role of social justice as an evangelizing force for young people is something that has gotten more attention, certainly because of the way Pope Francis has talked about it,” O’Keefe said.

Nalliber Ruiz Torres, a graduate student at the University of Southern California, helps lead a CRS young adult chapter that got started in July 2020.

Torres, 30, is studying public policy with the hopes of working on projects that supply drinking water in Central America and the La Guajira region of her native country of Colombia. “That’s my mission,” she said.

A lifelong Catholic, she attends Mass weekly at the Caruso Catholic Center at USC, her alma mater. She is now one of 20 Catholics from several different parishes ranging in age from 25 to 35 who gather to study Catholic social teaching and learn how to put their faith into action. Christian, center, a Catholic Relief Services staff member, gives instructions to relief beneficiaries about mandatory hand washing before they can receive relief benefits in Kinshasa, the capital and the largest city of the Democratic Republic of the Congo, in Sept. 2020. With support from the Center for Disaster Philanthropy and CRS private funds, CRS DRC launched multiple COVID-19 response activities in the capital of Kinshasa, providing 3,560 vulnerable households with direct food or cash assistance, 8,000 vulnerable households with handwashing kits, and disseminating messages by radio and through print materials to improve public understanding of transmission risks, symptoms and prevention measures in four of the city’s most-affected health zones. Photo by Justin Makangara for Catholic Relief Services

Her chapter and others like it in California have been writing letters and calling Senator (now Vice President-elect) Kamala Harris’ office to advocate for the Global Child Thrive Act. That led to a virtual meeting with Harris’ staff that felt like an answered prayer.

“It was a light to see that, little by little, with constant prayer and discipline, God has opened up the path for more legislation to be presented and supported for the wellbeing of millions of families and children and their generations,” Torres told other chapter leaders in a national call after the meeting.

She said that CRS has helped her better understand Catholic social teaching, which she says emphasizes the right to a healthy life, with access to food and water and other necessities as well as human dignity.

“It’s more than giving just food and shelter,” she said. “It’s recognizing that you, as a human being, have the image of God. And … my call as a believer is to go and create those opportunities for those who don’t have them.”

The young adult groups are just one way CRS has expanded its outreach to Catholics, young and old. The organization has been building direct support via a network of CRS Chapters aimed specifically at poverty relief.

RELATED: In rural East Tennessee, a mobile clinic run by nuns and aging volunteers cares for the body and the soul

Deacon Tim Donohue, 71, and his wife have long been involved in their parish, Holy Name Church in West Roxbury, Massachusetts, where they used to mentor confirmation classes. Those classes went on several trips to Appalachia to help people in need, which eventually led Donohue to go to Guatemala and Kenya to see CRS’ work overseas firsthand. He has also visited the United States-Mexico border.

CRS, Donohue said, is a counter to the trend away from organized religion, especially those who grew up Catholic and later dropped out of church. Many of them, he argues, believe the church’s teaching about loving and serving their neighbors but are skeptical about institutions.

“They know in their heart they should help others,” he said. “It takes them a while to understand the joy of the gospel, and that comes from helping and serving others.” In all, CRS said that it has 89 chapters already established, all since last year. Another 35 are in development, including 10 chapters forming at high schools.

After focusing on COVID-19 for nearly a year, international aid groups are bracing for what happens as the world comes out of lockdown. After a slowdown in the early months of the coronavirus outbreak, would-be refugees and asylum-seekers in Africa are again taking on the treacherous crossing of the Mediterranean to reach Europe.

But the crisis has hit even developed countries hard. In Rome, officials from the Community of Sant’Egidio, a Catholic lay organization dedicated to social services (and named for the 7th-century Greek saint known in English as Giles the Hermit), has been helping families driven into poverty and homelessness by the economic stress of the pandemic.

“Before, out of every ten people in line, there’d be nine foreigners, mostly migrants from poor countries, and one Italian,” said Augusto D’Angelo, the community’s coordinator for homeless services. “Now there are probably three foreigners and seven Italians.”

The pandemic has also limited housing for the existing homeless because of social distancing requirements and has made food services more difficult to carry out.

“Winter is coming, and we cannot offer safe housing to as many people as in the past,” said D’Angelo. “There are families that a year ago could find a way to make ends meet and now they come to us for food.”

RELATED: Across America, Muslims are becoming a fixture on the disaster relief landscape

As organizations such as CRS look for help beyond the churchgoers who have sustained them for decades, O’Keefe said, they have found recruits among those who feel the need to stop doomscrolling and make a difference. The fallout of COVID-19 will be with us for months and years to come and may well spur others to sustain groups inspired by faith to help their neighbors.

“Pope Francis said, ‘Nobody can save themselves alone,’” D’Angelo said. “That is why religious charitable aid groups will always have a role to play.”