(RNS) — Looking for an Easter service to attend while social distancing? Here is a selection of historic, prominent and popular churches from various traditions across the United States and the world, with links to their streaming pages or websites.

Mass at the Vatican with Pope Francis
Wake up early to see the pope celebrate Easter at St. Peter’s Basilica in Rome, followed by the traditional Easter Day Urbi et Orbi message and blessing.
4:55 a.m. Eastern

St. Patrick’s Cathedral, New York
New York has been the epicenter of the coronavirus outbreak in the country, and this service, celebrated by Cardinal Timothy Dolan, Catholic archbishop of New York, will likely incorporate prayers for those who have died and those health care providers and first responders who have sacrificed for their fellow New Yorkers.
10:15 a.m. Eastern

Our Lady of All Angels Cathedral, Los Angeles
This soaring landmark of contemporary architecture in Los Angeles is the seat of Catholic Archbishop José H. Gomez, president of United States Conference of Catholic Bishops.
Spanish service at 7 a.m. Pacific; English at 10:00 a.m.

Washington National Cathedral, Washington, D.C.
Founded by Congress as the nation’s non-denominational house of prayer, it has served as the setting for state funerals and other major national celebrations. The neo-Gothic cathedral is also an Episcopal parish and the seat of the bishop of Washington, the Rt. Rev. Mariann Edgar Budde. Even this year’s spare, social-distanced service will manage to represent the spirit of high Anglican ritual and music.
11:15 a.m. Eastern

The Summit Church, Raleigh-Durham, North Carolina
Southern Baptist Convention President J.D. Greear’s church has a sophisticated video program and contemporary music with on-screen hymn lyrics.
Saturday at 4 and 5:30 p.m. and Sunday at 9 and 10:45 a.m. Eastern. In Spanish at 10:45 a.m.

United Methodist Church of the Resurrection, Leawood, Kansas
The largest United Methodist church in the United States will stream two services, one a traditional Methodist liturgy that has been pre-recorded, and the other a live modern message with music by the church’s house band.
7:30 a.m., 9:15 a.m., 11 a.m. or 5 p.m., Central

Hillsong, various locations
Get a head start by taking in Hillsong’s wildly popular contemporary music at this international non-denominational church’s home base in Australia on Saturday. Or play the recorded version when you’re ready to celebrate (a sunrise service, perhaps?). You can stream a local service from a Hillsong campus closer to home here.
Saturday at 9:00 p.m., Eastern

The Potter’s House, Dallas
Bishop T.D. Jakes’ 5,000-seat, nondenominational Potter’s House sits atop a 34-acre campus. Besides his reputation as a dynamic preacher, Jakes is a bestselling author and filmmaker.
9 a.m. Central

Preston Hollow Presbyterian Church, Dallas
One of the country’s largest Presbyterian churches, Preston Hollow has been asking parishioners to “pass the peace” digitally throughout the coronavirus crisis by texting one another. Of its three Easter services, the 10 a.m. will be a traditional liturgy.
9 a.m., 10 a.m. and 5 p.m., Central

Trinity United Church of Christ, Chicago
The largest church in the UCC fold, with a predominantly African American, social justice focused ministry, Trinity UCC was often attended by President Obama before he went to the White House.
7:30 a.m., 11 a.m. and 6 p.m., Central 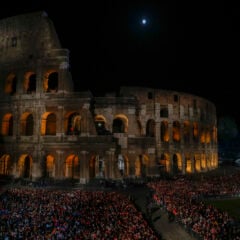 News
Pope Francis showcases his vision for peace at Good Friday’s Via Crucis
Follow us on Facebook!
Submit your photos to RNS