(RNS) — A couple of weeks ago, The Atlantic magazine ruffled the dovecotes by publishing “Beyond Originalism,” an attack on conservative constitutional orthodoxy by conservative Harvard law professor Adrian Vermeule. With the zeal of the convert to Catholicism that he is, Vermeule proposes to replace originalism with what he calls “common good constitutionalism,” a concept that harks back to the late 19th-century anti-libertarian political philosophy of Pope Leo XIII.

Originalism, as espoused by the late Justice Antonin Scalia or Justice Samuel A. Alito Jr., is based on the proposition that, unless the framers’ intent is treated as authoritative, the Constitution only means what a given majority on the Supreme Court wants it to mean. That’s how, in the originalists’ view, the court found that prescribed prayer and Bible reading in the public schools violated the establishment clause and discovered a constitutional right for women to obtain abortions.

Vermeule sees originalism as little more than a useful defensive crouch adopted by conservatives decades ago to criticize the dominant liberal legal ideology. But now that conservative judges all but dominate the judiciary, it’s time, he argues, to abandon the crouch and use the Constitution’s grand general principles (such as Congress’ power to provide for the country’s “general welfare”) to pursue common good policies based on “the ius gentium — the law of nations or the ‘general law’ common to all civilized legal systems — and principles of objective natural morality” (i.e., natural law). 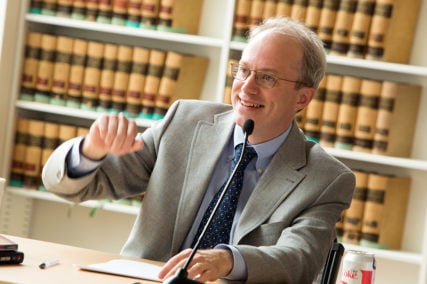 To achieve the desired policies, Vermeule envisages “a powerful presidency ruling over a powerful bureaucracy.” He loses no love over majoritarian desires, whether approved by Congress or by some other democratic means.

Not only does Vermeule expect his powerful ruling authorities to promote traditional morality — by, of course, doing away with abortion rights — he also expects it to support organized labor and “to protect the vulnerable from the ravages of pandemics, natural disasters, and climate change, and from the underlying structures of corporate power that contribute to these events.”

If all this seems passing strange in a conservative American legal theorist, it is anything but for one under the influence of Leo XIII, whose papacy ran from 1878 until his death in 1903.

Leo is rightly celebrated by Catholic progressives for his 1891 encyclical “Rerum novarum,” which endorsed the right of workers to unionize at a time when Western capitalism was at its most predatory. But even as he lay the foundations for contemporary Catholic social doctrine, Leo did not prefer democracy over other forms of government. He believed that states exist in order to enable God to reign over humanity.

As he wrote in “Immortale Dei,” his 1885 encyclical on “the Christian constitution of states”:

In political affairs, and all matters civil, the laws aim at securing the common good, and are not framed according to the delusive caprices and opinions of the mass of the people, but by truth and by justice; the ruling powers are invested with a sacredness more than human, and are withheld from deviating from the path of duty, and from overstepping the bounds of rightful authority; and the obedience is not the servitude of man to man, but submission to the will of God, exercising His sovereignty through the medium of men. Believing that states should ideally give his church preferential recognition, Leo hardly supported the doctrine of religious liberty, later endorsed by the Second Vatican Council and more recently embraced with ideological fervor by America’s conservative Catholic episcopate. For his part, Vermeule is cagey on the subject.

He cites approvingly a New York judge for upholding an 1811 blasphemy conviction and writes that the Supreme Court’s declaration, in Planned Parenthood v. Casey, that “each individual may ‘define one’s own concept of existence, of meaning, of the universe, and of the mystery of human life’ should be not only rejected but stamped as abominable, beyond the realm of the acceptable forever after.”

Vermeule rejects the spiritual libertarianism that has led some parents to claim a religious right to send their children to school without being vaccinated. Presumably he would also reject claims made by religious leaders (including a few Catholic prelates and prominent lay folk) who insist on religious exemptions from government orders not to congregate during the current pandemic.

Last year, he proposed giving “lexical priority to confirmed Catholics” in U.S. immigration policy, but in his Atlantic article he says nothing about rethinking the First Amendment’s ban on laws “respecting an establishment of religion.”

Given that a large portion of the conservative Catholic elite in America have embraced a preferential option for both economic and spiritual libertarianism, it is hard to imagine Vermeule’s common good constitutionalism gaining much traction in that quarter. But it will be interesting to see if it has any impact on the jurisprudence of the originalists on the Supreme Court, including John Roberts, Alito, Clarence Thomas, and Brett Kavanagh (Catholics all), and sometime-Catholic Neil Gorsuch.