LOS ANGELES (RNS) — The faithful stood in line for about two hours to receive Communion at Godspeak Calvary Chapel in Thousand Oaks.

Some were in tears as they approached the Communion table. The church, which typically dispenses about 400 Communion cups on a regular Sunday, served over 700 that day.

Pastors from other churches attended. Protesters and police were there.

This was the scene pastor Rob McCoy witnessed April 5 when he decided to open his sanctuary for Communion on Palm Sunday, despite a statewide stay-at-home order that bans group gatherings and shut down businesses except for those deemed essential.

“People needed this,” McCoy told Religion News Service. “What they did was not an affront. They wanted the community to know that Christ is critical and essential and they wanted to testify that no matter what it would cost them, even if they were going to be berated and maligned.”

To McCoy, receiving Communion is just as essential as people needing to get food from the grocery store. That Sunday, he said, worshippers followed social distancing guidelines while they stood in line. Tape was cued 6 feet apart on the sidewalk. Only 10 people were permitted inside the sanctuary at a time. Communion elements were individually sealed. Lysol was sprayed on seats after those attending got up to leave. “Why are we being scrutinized when we actually have the First Amendment on our side?” said McCoy, who resigned from his City Council position when he planned to violate orders that don’t consider churches as essential. “Why is religion the scapegoat?”

While most houses of worship have shut down their in-person worship services — a recent Public Religion Research Institute poll found only 3% of Americans who attend services planned to observe Easter at an in-person service — some religious leaders argue that religion is essential, even during a pandemic.

A group of Southern California pastors sued Gov. Gavin Newsom as well as Riverside and San Bernardino county officials, claiming social distancing orders violate the First Amendment that protects their right to assemble. The suit seeks to block the state and county orders that don’t include churches among the essential infrastructure where people are allowed to meet in person.

The lawsuit, filed Monday (April 13) in federal court for the Central District of California, names pastors and a church member of three Riverside and San Bernardino county congregations: Shield of Faith Family Church in Fontana, Church Unlimited in Indio and World of Life Ministries International, Inc. in Riverside.  It was filed by the nonprofit Center for American Liberty.

The governor’s office was not immediately reached for comment, while Riverside and San Bernardino County spokespeople said they were reviewing the lawsuit. Patrick Scales, head pastor of Shield of Faith Family, a Pentecostal church, said his congregation should be able to have in-person church services while adhering to social distancing measures, according to the lawsuit.

The suit cites James 5:14: “Is any sick among you? Let him call for the elders of the church; and let them pray over him.”

“Scales believes that he must serve the needs of his church’s parishioners, especially right now in the midst of the COVID-19 crisis,” according to the suit.

James Dean Moffatt, senior pastor of Church Unlimited, “believes that scripture commands him as a pastor to lay hands on people and pray for them, this includes the sick,” the suit reads.

Moffatt was fined $1,000 for holding a Palm Sunday service, according to the suit.

Posted by Shield Of Faith Family Church in Fontana on Sunday, April 12, 2020

Moffatt said he’s required by Scripture to baptize people, “something that cannot be done at an online service,” the suit reads.

Brenda Wood, senior pastor at World of Life Ministries International, a nondenominational Christian church, said she’d like to hold services in a way that protects attendees “so that its parishioners may follow Hebrews 10:25 and encourage one another during these troubling times of COVID-19,” the suit reads.

“Wood believes she can implement proper social distancing measures similar to those practiced by restaurants, auto mechanics, and abortion clinics,” according to the suit.

The suit takes issue with certain language in the county orders.

The San Bernardino County order allows faith-based services through streaming or other technology while people remain in their homes, “but does not allow individuals to leave their homes for driving parades or drive-up services.”

In the Riverside County order, all public or private gatherings are forbidden in spaces like stadiums, theaters and churches. It also bars the use of any indoor or outdoor space for nonessential purpose such as church services or swap meets.

Harmeet K. Dhillon, chief executive officer for the Center for American Liberty, said in a statement that state and local officials have favored businesses and professions while targeting people of faith.

Through these orders, Dhillon said, they are “decreeing to religious institutions that it is ‘good enough’ that they be allowed to offer streaming video services,” said Dhillon, who is on the Republican National Committee that helps steer the party’s platform and election strategy.

“The state does not get to dictate the method of worship to the faithful,” Dhillon said.

RELATED: See which states have religious exemptions in their stay-at-home orders

Just because the state and county orders have a disproportionate impact or burden on some religious groups, it does not mean the measures are “the product of cultural bias or discrimination of any kind,” Stolzenberg said.

Stolzenberg also said the suit does not recognize the need to distinguish emergency from nonemergency situations.

“In other circumstances, the court has recognized that in situations where there is a need for split-second decision-making in order to respond to imminent threats to life or public safety, judicial deference is required,” she said.

Also, Stolzenberg questioned the suit’s argument that churches should be treated the same as secular activities that are deemed essential.

Across Southern California, many faith leaders and pastors have made the decision to close their churches to the public and have experimented with new forms of online ministry.

Pastor Victor Cyrus-Franklin of Inglewood First United Methodist said congregants have learned to embrace new ways of doing church. Members, he said, can now point to the online ministry and say “look at what our church is doing in the midst of all of this.”

Before, it may have been intimidating and unfamiliar, he said. The pandemic, Cyrus-Franklin said, “created an opportunity for us to rediscover a sense of connection and a hope of new ways of being a church.”

The Archdiocese of Los Angeles, the nation’s largest with about 5 million Catholics, not only suspended in-person Masses, but ordered parishes be closed to the public until further notice.

“Our community of faith is fully committed to doing all we can to limit the spread of this global public health threat,” said Archbishop José H. Gomez in a March 24 statement.

The Rev. John H. Taylor, bishop of the six-county Episcopal Diocese of Los Angeles, addressed the issue on Facebook during Holy Week.

“Some say they need church more than ever these days. We all get that. But church isn’t just about what I need. I also need to love, and protect, my neighbor as myself. … Staying home might be one of the most consequential things you and I have ever done,” he wrote.

“Which is why the church has reassured us that if a priest says Holy Eucharist by herself with people participating on-line, she’s not alone,” he wrote. 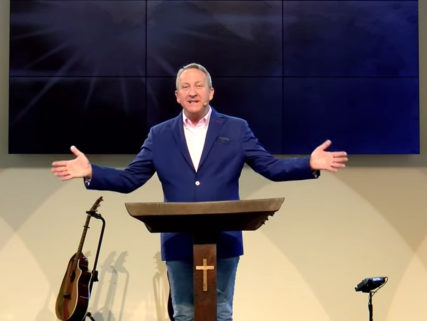 Back in Thousand Oaks, McCoy said his church, is only holding online worship services.

However, McCoy said he plans on holding in-person Communion sometime in May. The church typically hosts Communion the first Sunday of the month, he said. But if social distancing continues, he said they’ll hold off until the end of the month.

“For the sake of the police force, and all of those who serve that are already inundated and busy, we didn’t want to add to their burden,” he said. “But we still will exercise our freedom of religion in a way that would not violate the CDC standards and practice social distancing.”

Thinking back to his decision to resign from the Thousand Oaks City Council, McCoy said there are no regrets.

“I’ve lost a portion of my income and my health care and I’m thinking that was a small price to pay to lift up Christ, to declare that he is essential,” he said.