This is a two-part series by Religion News Service exploring how the solitude that many people are experiencing as they isolate during the coronavirus pandemic is interacting with their faith. Read also The loneliness pandemic: How the quarantined are grappling with solitude and faith

VATICAN CITY (RNS) — During his solitary morning Mass at Domus Sanctae Marthae, Pope Francis’ prayers are often for the elderly. This is not an accident, as the coronavirus pandemic has pushed this normally isolated demographic into further isolation.

“We pray today for the elderly, especially those who are isolated or in retirement homes,” Francis said in his livestreamed homily April 15. “They are afraid, afraid of dying alone. They experience this pandemic as something aggressive against them.”

For those trapped at home during quarantine, the internet has been a window to the outside, allowing them to stay in touch with friends, loved ones, book groups and houses of worship. Video meeting apps, such as Skype and Zoom, have witnessed a boom in users since the beginning of the outbreak.

Many elderly, who are less nimble with modern means of communication, are particularly at risk of feeling alone, says Thuy-vy Nguyen, an assistant professor of psychology at England’s Durham University.

“Generally, the elderly are pretty OK with having a lot of time alone,” Nguyen explained in a recent interview with Religion News Service. “What impacts them more is the perception that they don’t have access to social interaction even if they want to.”

The professor’s findings reflect the anecdotal evidence of growing depression among the elderly in Italy.

Italian news outlets have reported a rise in the number of self-harm and suicidal acts by people between 75 and 80 years old since the outbreak began.

On April 9, an older man in the northern Liguria region committed suicide by throwing himself out the window.

“I can’t see my nephew. There is no reason to live this way,” his last note read.

In Lombardy, the region hardest hit by the pandemic, an elderly man killed himself after contracting the virus. Three people in a single retirement home in the northern Veneto region also took their own lives. An 89-year-old in southern Italy shot himself in the head April 16, apparently desperate to leave his apartment and visit his beloved vineyard.

Nguyen said she wonders how much of the trend can be ascribed to the fact that “we haven’t prepared the elderly enough to use the modern tools to reach out.” 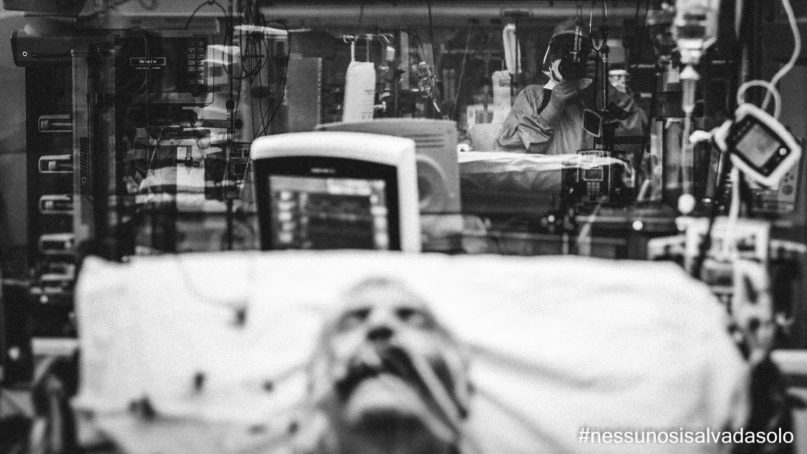 Italian photographer Mauro Pozzer has been photographing elderly coronavirus patients in the ICU of the San Bortolo Hospital in Vicenza, in northern Italy, as they used iPads and smartphones for the first time to speak with their relatives.

“The solitude is definitely among the most striking aspects” about his subjects, Pozzer told RNS by phone.

Pozzer lives alone himself since his wife died 10 years ago. His two daughters live with their respective partners. He spent Easter by himself, with no food, he said. He welcomed the job at the hospital to at least be among people.

“The uncertainty is the worst thing,” he said. “We know where we are, but we don’t know where we will end up, and every day you see the number of dead rise and fall.”

He said watching the elderly see their relatives via technology “is very touching.” It’s not rare to see them “stretch their hands to touch them or attempt to kiss the tablet.”

Pozzer had finished a shoot at the hospital when he was asked to come back to document the surgery, general and intensive care departments as they grappled with the pandemic.

“People are brought to the hospital or brought in in an ambulance and they don’t have a chance to speak with relatives, friends or loved ones. Often when they don’t make it … well, they are carried onto trucks to the incinerator along with all their possessions,” he said.

“We often hear that we all die alone,” he said. “But here you actually do.”

Pozzer accompanied one doctor to the room in the hospital’s basement where the personal effects of the dead are kept. Pozzer took his photo just as the doctor collapsed in tears.

“In these moments, people really cling to their faith,” he said, describing the numerous icons and images of Mary, the patrons and saints peeking behind hospital beds, hanging on the walls and clipped to the IVs.

Nurses kneel to pray next to the bed of the dying, and some doctors administer last rites after receiving dispensations from local bishops. 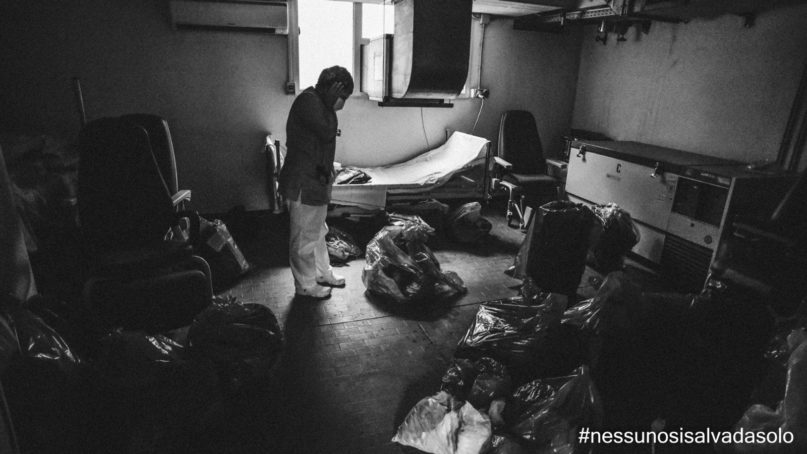 A staff members steps away for a quiet moment at San Bortolo Hospital in Vicenza, northern Italy. Photo by Mauro Pozzer

Pozzer wants to title his collection of photographs “Nobody saves himself” — words Pope Francis used several times in the past months, most recently in an editorial he wrote for the Spanish magazine Vida Nueva, published April 17.

“If there’s one thing we’ve been able to learn in all this time, it’s that no one is saved alone,” he wrote.

Amid so much death during the Lenten period leading up to Easter, Francis aptly chose to name his editorial “Un plan para resucitar” (“A plan to resurrect”). He called faithful and nonbelievers alike to find joy and hope in “the antibodies of solidarity.”

He compared the stone placed in front of Jesus’ tomb to the plight of the most vulnerable in our society, especially the poor and the elderly.

Through “the passion of our brothers and sisters, even living our own passion, our ears will hear the newness of the Resurrection: We are not alone. The Lord precedes us on our journey by removing the stones that paralyze us,” the pope said.

The efforts made by those who show solidarity through their actions “are not and will not be in vain,” he said, referring especially to the tremendous commitment of priests, educators, cleaners, transporters, nuns, priests, caretakers, nurses and doctors.

“God never abandons his people; he is always close to them, especially when sorrow is most present,” the pope wrote.

In his photos, Pozzer also documents the solitude of the medical providers working tirelessly to care for the sick. He sees them sleeping in their cars or cooped in their garages, afraid to return home and risk spreading the disease to their loved ones.

Even amidst such loneliness, the health professionals “aren’t desperate; they all come together as a team,” he explained.

“Yes, we have passed through the storm, but very slowly we are coming out of this together,” he added.