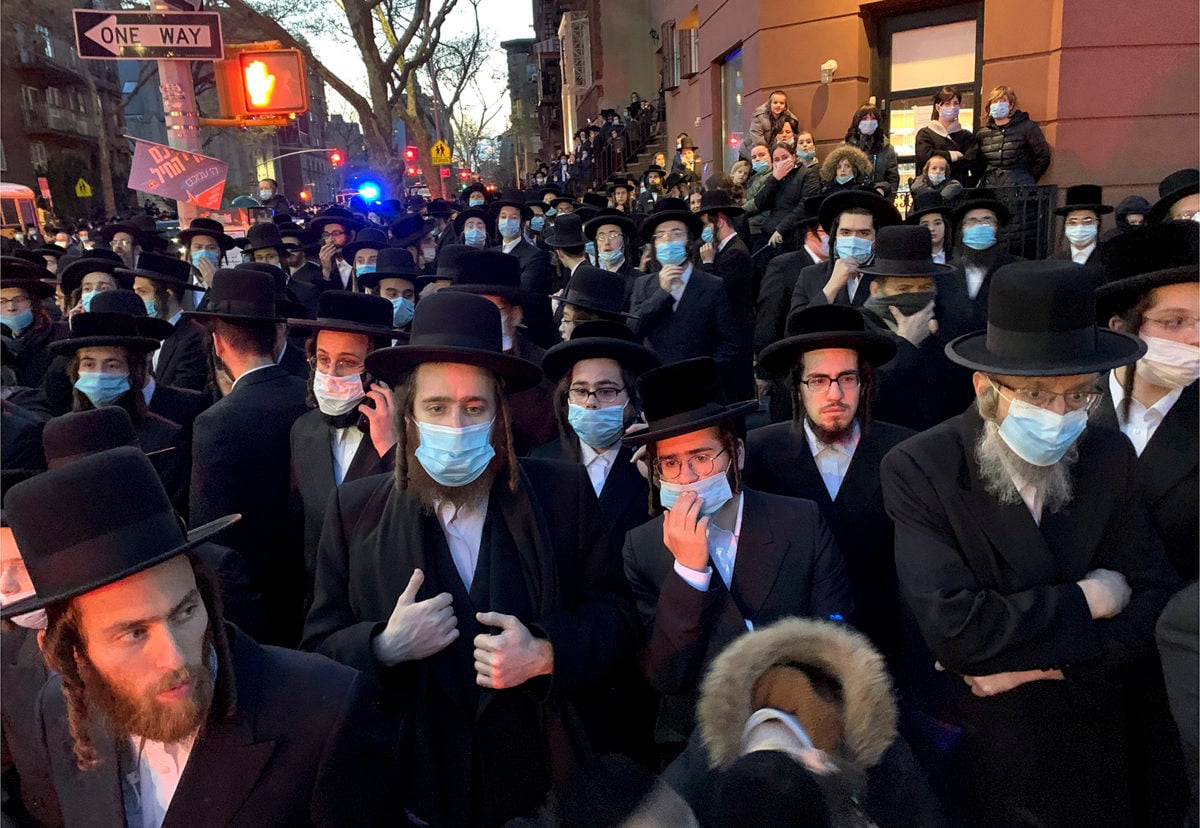 Hundreds of mourners gather in the Brooklyn borough of New York, Tuesday, April 28, 2020, to observe a funeral for Rabbi Chaim Mertz, a Hasidic Orthodox leader whose death was reportedly tied to the coronavirus. The stress of the coronavirus' toll on New York City's Orthodox Jews was brought to the fore on Wednesday after Mayor Bill de Blasio chastised "the Jewish community" following the breakup of the large funeral that flouted public health orders.(Peter Gerber via AP)
April 30, 2020
Mark Silk

Not because two and a half thousand of us turned out for a funeral at the epicenter of this country's coronavirus pandemic but because after the cops broke things up New York Mayor Bill de Blasio tweeted:

"My message to the Jewish community, and all communities, is this simple: the time for warnings has passed. I have instructed the NYPD to proceed immediately to summons or even arrest those who gather in large groups. This is about stopping this disease and saving lives. Period."

"Hey @NYCMayor," tweeted ADL president Jonathan Greenblatt, "there are 1mil+ Jewish people in #NYC. The few who don’t social distance should be called out — but generalizing against the whole population is outrageous especially when so many are scapegoating Jews. This erodes the very unity our city needs now more than ever."

“This has to be a joke,” tweeted New York City Councilman Chaim Deutsch, a Brooklyn Democrat who is an Orthodox Jew. He added, “Every neighborhood has people who are being non-compliant. To speak to an entire ethnic group as though we are all flagrantly violating precautions is offensive, it’s stereotyping, and it’s inviting anti-Semitism. I’m truly stunned.”

"So, as has been true with moral ciphers from time immemorial, you decided to seek your jollies by attacking Jews," wrote John Podhoretz in the "New York Post." 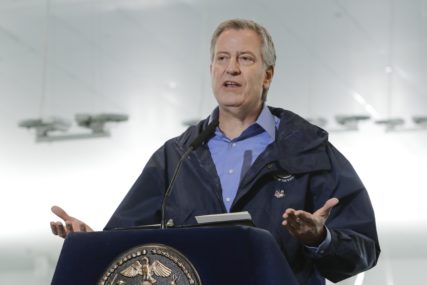 An old (Jewish) friend of mine likes to say that Jews consider any statement by a non-Jew that begins with the words "Jews are" to be anti-Semitic if it's not followed by something like "a community that puts a high value on learning and supporting the arts." In other words, just about whenever a gentile lumps us all together it's (for historically understandable reasons) a trigger — one that de Blasio certainly pulled.

But there's more to it than that.

Addressing what happened in the Williamsburg section of Brooklyn Tuesday by sending a message to the Jewish community is, let us say, problematic. The funeral in question was for a leading rabbi of the Satmar Hasidic sect of what are usually called "ultra-Orthodox" Jews but more accurately referred to as Haredim (i.e. "tremblers" before God).

As my RNS colleague Reform Rabbi Jeffrey Salkin notes, Haredim have no use for his kind of Judaism — or, indeed, for the Judaism of the vast majority of American Jews (from whom there is no shortage of antipathy that flows the other way). And the various Haredi sects often have no use of each other. The Satmars themselves remain bitterly divided after a dynastic schism a decade and a half ago.

The deceased rabbi, Chaim Mertz, was revered by both sides of that schism, so it would have been OK for de Blasio to issue his message to "the Satmar community" — or to "the Haredi community" — with whose various sects he has long enjoyed a good relationship, and who have been especially hard hit by COVID-19. As it is, what he did was comparable to responding to a gathering of the St. Pius X Society of ultra-Orthodox Catholics by tweeting a warning message to "the Christian community, and all communities."

But there's more to it than that.

According to reporting in the "Forward," during New York's coronavirus crisis authorities have tended to look the other way when Haredi Jews have violated the city's injunction, issued on March 22, that faith leaders "not hold any in-person services either indoors or outdoors." Indeed, it seems the cops had devised a plan with the Satmars for a modest funeral procession for Rabbi Mertz.

Under the circumstances, it is telling that Mertz's small synagogue issued a statement expressing understanding of the mayor's "frustration" and apologizing that the procession resulted in such chaos. "It also hurts that this led to singling out the Jewish community, and for that we apologize to all Jewish people," it read.

So maybe there is such a thing as the Jewish community.