VATICAN CITY (RNS) — A record-breaking 50 million people in 2019 were internally displaced, or refugees within their own country, according to a recent study. Pope Francis and the Vatican championed their cause on Tuesday (May 5), with new guidelines for Catholic dioceses and parishes.

“In this time of pandemic, the virus does not seem to distinguish between those who are important and those who are invisible, those who are settled and those who are displaced. Everyone is vulnerable and each infection is a danger for everyone,” said Cardinal Michael Czerny, undersecretary of the migrants and refugees section of the Vatican Dicastery for Promoting Integral Human Development, during an online news conference on Tuesday.

“In the post COVID-19 world that is emerging, the contribution of internally displaced people — like everyone’s contribution — will be very much needed,” he added.

Pope Francis created the migrants and refugees section to spearhead initiatives for the millions who are forced to leave their homes due to war, natural disasters and climate change. To further prove his commitment, Francis chose to preside over the section himself.

The news conference was held to release a new volume called “Pastoral Orientations on Internally Displaced People.” Inspired by Francis’ call to “welcome, protect, promote and integrate” all those who live “in the peripheries,” the volume invites Catholic parishes, nongovernmental organizations and dioceses to advocate the cause of internally displaced people.

The volume references a recent study by the Internal Displacement Monitoring Centre of the Norwegian Refugee Council, which found that over 50 million people were internally displaced due to war or natural disasters throughout the globe, a number likely to rise as climate change affects more and more vulnerable populations.

Millions have been displaced in Syria after the Islamic State group wreaked havoc on towns and cities there. Internally displaced children are at risk of being exploited or trafficked in Kurdistan. In Myanmar, the Rohingya Muslim communities have been persecuted and left without a home, unable to access clean water in the coronavirus pandemic. 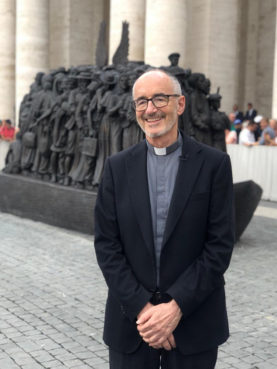 But internally displaced people are also right beneath our noses, Czerny noted, pointing out the thousands of United States citizens who became homeless and destitute as a result of the devastating effects of Hurricane Katrina in 2005.

“The real peripheries are among us,” Czerny said, adding that the document invites parishes to discover internally displaced people in their community and find ways to cater to spiritual and basic needs.

Internally displaced people struggle to gain public and social recognition, and depending on the country they reside in, their human rights can often be trampled. In the context of the coronavirus pandemic, the internally displaced have a higher risk of contracting the virus and are often forgotten in the frenzied efforts to limit contagions.

The Rev. Fabio Baggio, who also answers directly to the pope in the migrants and refugees section, underlined the importance of recognizing the “invisibility and vulnerability” that the internally displaced face amid this pandemic.

Despite the pandemic, “we must not forget about other emergencies and those still to come,” Baggio said, stating that being able to multitask and address numerous disasters, challenges and changes is a prerequisite of our times.

Part of the Catholic Church’s efforts to multitask, according to Baggio, includes engaging in dialogue with other religious communities in order to work together for common goals and shared principles. He said that this interreligious “trend” in the Catholic Church is essential and shows no signs of slowing down.

This latest document is part of a series of efforts and commitments made by the Catholic Church under Pope Francis to champion the needs of immigrants and refugees amid a fraught public debate. Czerny wrote 20 pastoral action points as guidelines for working with immigrants and refugees in 2017 after a “thorough process of consultation and reflection.”

The action points were part of the Vatican’s contribution to the United Nations’ Global Compact for refugees. In 2018, the Vatican department also published guidelines to combat human trafficking, which Pope Francis has often described as “modern-day slavery.”

In the latest document, Czerny wrote that the migrants and refugees section will publish another document in the near future on how climate change impacts the growing number of internally displaced people.

“We are aware that the population displaced by climate is a new and growing category,” Czerny said. “We need to keep in mind that this is a new experience and a new insight and we will be looking at it now in the coming months.”