She had been praying to hear his voice telling her that he missed her, that he was safe and healthy — that her public campaign urging China to release Iminjan Seydin, a prominent Uighur publisher and historian, had worked and her father was now free.

But when it finally happened, it was via a two-minute video posted on Twitter by Chinese state media on Monday (May 4) morning, in which her father states that Imin had been “deceived” by “overseas anti-China forces” into believing he had been detained.

“It was unbelievable to see him,” said Imin, a 27-year-old research assistant at Boston’s Brigham and Women’s Hospital. “I watched the video again and again, just seeing him sitting there alive. It was a relief, even though he seems like he has weakened a lot physically.”

“It looks like, obviously, he was forced to say that to me under threat,” Imin said. “We all know that. … They tried to silence me by having my dad say that to me, and they tried to discredit my words. If I didn’t speak up, I don’t think they would have released him and made this video.”

RELATED: A daughter’s duty: From Boston, a Uighur woman champions her father’s release in China

Imin and her father, 55, are part of the beleaguered Uighur community, the mostly Muslim ethnically Turkic minority concentrated in China’s northwestern Xinjiang region. At least a million Uighurs have disappeared into the Chinese government’s extensive detention camp network over the past few years.

Last year, she learned from sources in Beijing that Seydin had been detained in one of these camps before being convicted of “inciting extremism” in a secret trial in February 2019. Seydin was sentenced to 15 years’ imprisonment, deprivation of political rights for five years and a fine of 500,000 RMB, allegedly over a colleague’s Arabic rhetoric book that he published in 2014. 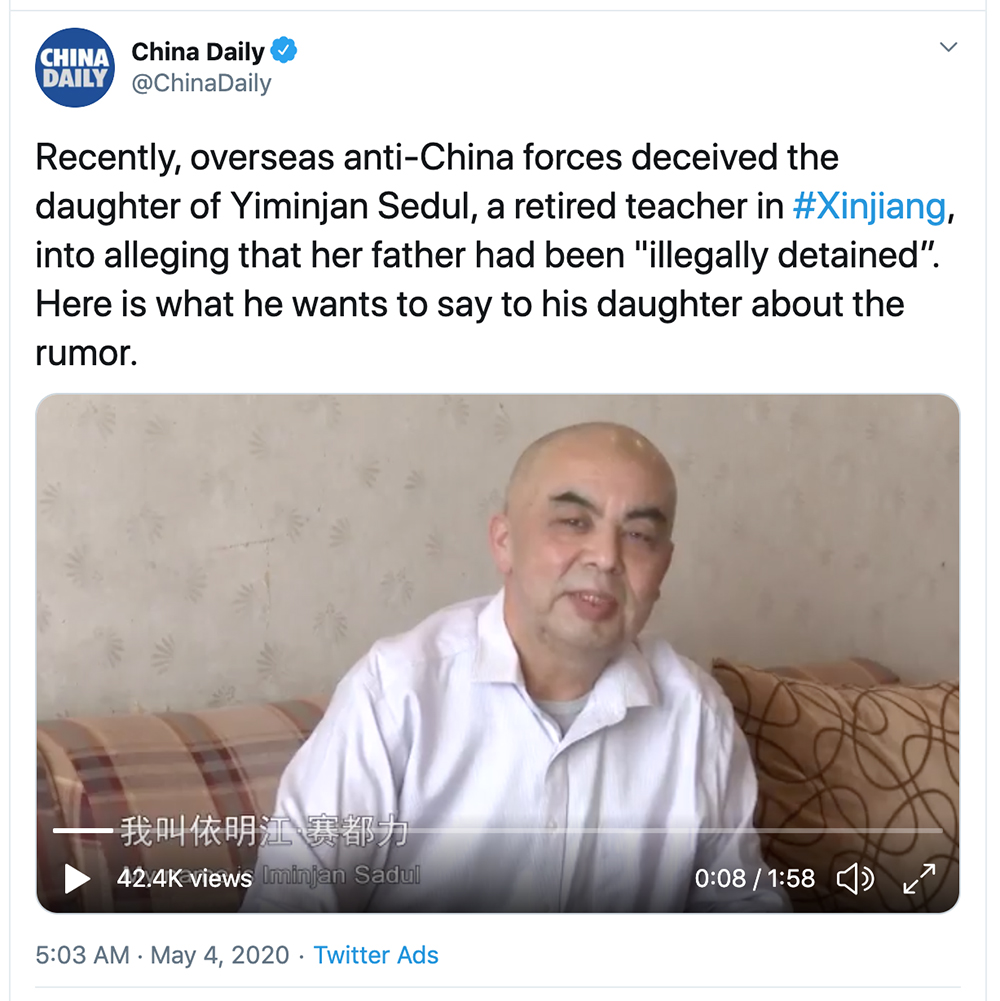 A video of Iminjan Seydin was released by China Daily, purporting to show him in good health. Screengrab

“This is China’s futile attempt to save face after his daughter called global attention to his case,” Rushan Abbas, executive director of the Campaign for Uyghurs, said. “(Seydin’s) appearance, his behavior and the things he said makes it clear that he is speaking under duress.”

After reports about his arrest by Radio Free Asia, Voice of America and Religion News Service, as well as countless social media posts by Imin, her father was the subject of campaigns by Amnesty International and PEN America. It was that advocacy China had been hoping to silence, Imin and other Uighur rights advocates said.

“I was heartbroken upon hearing what you said,” Seydin admonishes Imin in the video, posted by China Daily. “How could my daughter say something like this? So I want to tell you: Don’t be deceived by overseas anti-China forces again and stop saying those things.”

Imin confirmed to RNS that she has since spoken to her father once over video chat. Seydin, who was at her family’s home in Xinjiang, told his daughter during the call that he had decided not to use his phone for the past few years while on a government-mandated rural work program.

Imin says she knows better than to believe that. Her father’s old shirt, size XXL, now hung off his frame. His face was slimmer, and his head had been shaved. That was an obvious indicator that he had been detained, she said, as Seydin had always been immensely proud of his “beautiful” hair. Iminjan Seydin with his daughter, Samira Imin, in an undated photo prior to his detention. Photo courtesy of Samira Imin

Despite her concerns that speaking up now may threaten him once again, Imin said, “at the same time I feel it’s necessary to speak so that people know what happened, that they should be brave and courageous to say the truth.”

Since seeing the video, she has been unable to sleep at night.

It took her hours to muster up the courage to even listen to his message to her. When she finally hit play, she said, his words barely registered. Instead, she watched the video again and again, heart swelling at the fact that he was even alive.

“I was afraid to hear what he said,” she said. “I was excited, but there was this indescribable feeling — not fear, something else — that kept me from clicking on it and watching it.”

Imin says it’s clear that the video was scripted by Chinese authorities, but she’s more concerned with confirming whether he has been genuinely freed.

“Don’t try to trick me,” she posted on Twitter, where she has for months been trying to bring attention to her father’s case. “I will find out whether he is fully released or not soon.”

After first seeing the video, she began calling her family back in Xinjiang but the calls were declined. At one point, her family said they could not speak as they had “guests” over. Late on Tuesday night, her call went through and she was able to video chat with her father for 20 minutes.

“He seems fine,” she said. “Well, not totally fine. He’s a lot skinnier than before. He seemed happy, but I don’t know.”

Uighur advocates say the China Daily video was part of a broader trend in which China forces detainees to make statements that align with state propaganda and broadcasts them via state media.

“If China truly released him, why didn’t he call his daughter and speak to her privately on the phone?” Abbas told RNS. “We all know that no parent would go through state media to speak to their child, especially after being detained and losing contact.”

The human rights organization Safeguard Defenders says televised statements are propaganda tools that serve to warn others who might criticize the Chinese government and to discredit allegations of abuse.

A 2018 report by Safeguard Defenders found at least 45 cases of forced televised confessions in China since 2013. Several cases involved Uighurs, including students of jailed prominent Uighur scholar Ilham Tohti. Those who confessed alleged being dressed by police, then ordered to memorize a script and instructed on how to deliver it, the report said. Some said they were threatened and tortured into making admissions.

Despite that, Abbas said that she and her niece would welcome any proof of life for her own sister, medical doctor Gulshan Abbas, who disappeared in 2018.

The same day that Seydin’s video was posted, China Daily published a similar video with Uighur woman Guligeina Tashimaimaiti, whose sister in Germany had spoken to PBS and other outlets about Tashimaimaiti’s detention. It contained clips of Tashimaimaiti living with her family and teaching English classes at a so-called vocational training institution. Her sister in Germany was able to video chat with her briefly as well.

“These videos are not evidence against the systematic disappearance of Uighurs in their homeland,” Omer Kanat told RNS.

The director of the Uyghur Human Rights Project said the videos are rather a confirmation of what Uighur rights groups have been saying about being prevented from speaking to family members overseas because they are in camps, or threatened with being sent to camps.

“While they are happy to see their loved ones alive, they still have reason to fear for their safety,” Kanat said of family members like Imin, Tashimaimaiti and Abbas. “Hundreds of Uighurs continue to speak out in order to try to get ‘proof of life’ videos of their family members as well.”

Indeed, the Twitter replies to both videos are composed almost entirely of other Uighurs from around the world, desperately begging the Chinese government to show them where their own disappeared relatives are.

“Where is my mother?”  Gulshan Abbas’ daughter, Ziba, responded to the video. “Since you are so good at finding missing people, can you show her as well?”

News
Russia is censured for religious freedom violations against Jehovah’s Witnesses
Follow us on Facebook!
Submit your photos to RNS