She remembers how her father, a prominent Uighur publisher and historian named Iminjan Seydin, would always spoil her and shelter her from her mother’s scoldings. She thinks of the time she went out alone as a teen living in China’s Xinjiang region and became lost, and Seydin began frantically calling around to find her, then cried when she finally returned home.

“He was like a mountain to me, so strong,” said Imin, who works as a research assistant at the Brigham and Women’s Hospital, a Harvard Medical School teaching hospital. “He was always my protector.”

Now, months after she learned that Chinese officials were holding her father in a detention camp for Uighur Muslims before arresting him over charges of extremism, Imin says it’s her turn to become her father’s protector and bring him back home. “As his daughter, this is my duty,” said 27-year-old Imin, who moved to Massachusetts in 2014 to study biology at the University of Massachusetts Amherst. “Some people say, ‘Oh, you’re so brave, your father will be so proud of you.’ But he gave me life, educated me and made me the person who I am today. So this is basic.”

Her father, a 54-year-old professor of Chinese history at the Xinjiang Islamic Institute and founder of the Imin Book Publishing Co., has not been seen since May 2017.

Nearly three years ago on his birthday, Imin opened her WeChat app to see that Seydin had sent her a photo of himself wearing a crown at a party thrown by his colleagues. That was the last she ever heard from him.

At first, her family in Xinjiang, the northwestern region of China where most Uighurs reside, explained her father’s absence by saying his government-mandated rural work program had been extended. She says she was confused but accepted the explanation; at the time, she said, she trusted the government.

But soon, state surveillance intensified so she could not communicate with her family about Seydin. This fall, a friend in Beijing told her that Seydin had in fact been detained by Chinese officials just weeks after sending her that last photograph.

Seydin had become one of at least a million Uighurs who disappeared into the Chinese Communist Party’s massive network of detention camps, part of a brutal crackdown on the country’s ethnically Turkic and largely Muslim minority.

Last spring he was given a closed trial, she heard, before officials sentenced him to 15 years in prison, fined him 500,000 yuan and deprived him of political rights for five years, all over charges of promoting and inciting extremism. The cause, she was told, was apparently his involvement in publishing a colleague’s book on Arabic rhetoric — a book that had been on the market for two years and had passed the government’s own screening.

“If I don’t speak up, things may get worse,” Imin said. “If I do speak up, then at least the world knows that my father has a daughter in America.”

In December, she published a public letter addressed to the Chinese government, pushing officials to reveal any evidence they had against Seydin and explain why they did not appoint him an independent lawyer, hold a public trial and allow advocates from Human Rights Watch to investigate the case against him.

“If the Chinese Government can not agree with these basic demands which are based on the law, then it means my father was illegally arrested and imprisoned. It means my father is not guilty at all,” she wrote.

This is a testimony for my father.
Please help me rescue my father. #FreeIminjanSeydin #MetooUyghur #Xinjiang #China #CCP pic.twitter.com/Y4wOuXKgST

She has posted videos testifying to his detention and arrest, documented his case in a database of Uighur detainees led by an independent researcher and spoken to English and Uighur-language media about his work.

“I’m doing this to show them that I’m serious,” she said. “I’m not going to stop after one or two videos. I will keep doing what I’m doing until they release my father.”

China’s government has long claimed repressive measures in Xinjiang were necessary “de-radicalization” initiatives in response to threats from Islamist militants and violent separatists in the region. The intense surveillance and suppression of religion in Xinjiang, a ramping up of China’s ongoing Sinicization efforts, is critical to promote unity and harmony, officials say. 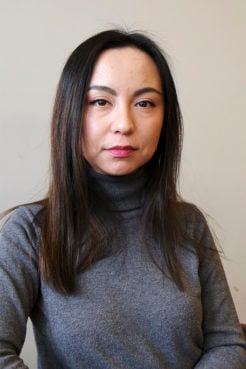 Until recently, Imin believed much of it.

“I was a product of that indoctrination, too,” she said, noting that she had attended Chinese school. “Until I woke up and realized how they are.”

Now, seeing the detention of her own father, she’s been shaken out of that belief. Her father was a law-abiding citizen, a paragon of liberal values and an “advanced” thinker who exemplified open-mindedness, she said. He never spoke against the government, toed the party line and was nowhere close to extremist thinking, Imin emphasized. And though he had faith, her family was not particularly religious.

The books he translated into Uighur and published were largely related to personal development, including Stephen Covey’s “The 7 Habits of Highly Effective People” and Kelly McGonigal’s “The Willpower Instinct.”

“My father worked as someone who tried to maintain the Uighur culture, and tried to connect them to the rest of the world,” she said. “I guess they saw his work and these books as a threat somehow to the Chinese government. I don’t know.”

To Imin, her father’s arrest is proof the Chinese government is aiming not just for assimilation, but for nothing short of a complete “cultural cleansing” in Xinjiang.

“My father has done nothing against the government, and they know he’s nothing near what they’re accusing him of” she said, pointing to the targeting of other Uighur intellectuals and artists as well as the destruction of historic mosques across Xinjiang. “So that means this isn’t about extremism. They just don’t want you to be different. They want us to all be the same as them.”

But what more can her people do to fit into broader Chinese society, Imin asked, when most Chinese people themselves don’t see the humanity of Uighur neighbors — even model citizens like her father?

Last week, after the death of a Chinese doctor who was sanctioned by authorities for warning about the coronavirus, hundreds of thousands of Chinese social media users accused the government of concealing information about the virus, and prominent Chinese academics circulated statements denouncing government censorship. The stunning public outcry, Imin said, demonstrated just how little most mainland Chinese people cared about the humanity and rights of Uighurs.

“The coronavirus whistleblower situation, it made them furious to the point that they’re speaking against their own government,” she said. “But the Uighur issue has gone on for years. Very few of them spoke up about it. So I guess they don’t really see us as part of them, or they would have at least felt sympathetic a little bit.”

That virus, too, has left Imin and other exiled Uighurs around the world anxious. Advocates say the coronavirus could spread rapidly within detention camps, where large groups of Uighurs and other ethnic minorities have been confined together in cramped quarters. “We can’t wait,” Imin said. “It’s not a joke. We know the conditions are very poor — the food, the hygiene, their immune systems — and we need something to be done immediately.”

The conditions have drawn international attention, including harsh bipartisan condemnations from U.S. lawmakers. American officials have compared the detention camps to the Holocaust, describing them as genocidal and crimes against humanity.

Late last year, both the House and Senate approved bills to sanction senior Chinese officials for their involvement in the Uighur crackdown. Once the Senate votes on a revised version of the bill, it will head to the Oval Office.

“Signing a paper is quite simple, but practicing it is hard,” Imin said. “I think this will be a long battle, but for the fate of the Uighurs, we need to have perseverance until this innocent group of people, including my father, get the justice they deserve.”

Religion Hub
Why China feels threatened by the moral authority of a 90-year-old Catholic bishop
Follow us on Facebook!
Submit your photos to RNS